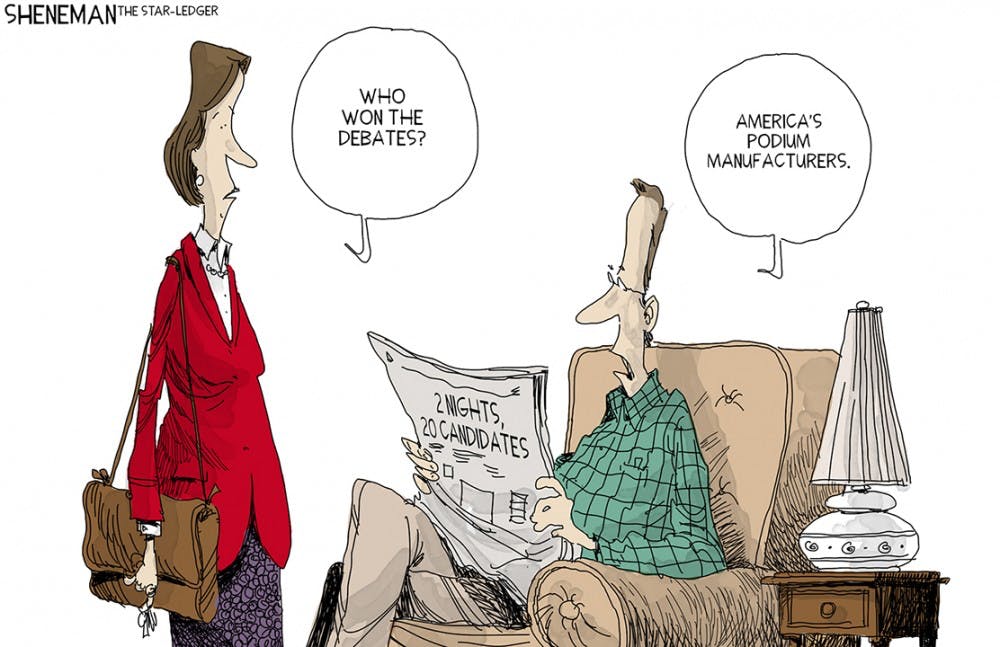 Election season for 2020 has already come into full swing as Democratic candidates prepare for the third Democratic debate in September with what should be stricter guidelines.

To qualify for this debate, the candidate must have reached above 2% in a minimum of four qualifying polls, and the campaign must have received 130,000 individual donations, a sharp increase from the previous two debates. Both the June and July debates required that candidates be polling at 1% and acquire 65,000 individual donors.

A few of the many candidates who have run for the Democratic presidential primary, including Rep. Eric Swalwell and Gov. Jay Inslee, have already dropped out of the race.

The candidates who dropped out of the race put some of the blame for their demise on their lack of ability to reach the Democratic debate requirements, which makes sense. These debates are crucial in getting out a campaign’s message to the nation, specifically to the people who haven’t had the opportunity to see a candidate or have yet to make up their mind about their primary ballot.

Even though these campaigns may feel cheated out of a full-length run for president, these debate requirements are crucial in narrowing down the playing field for the single Democratic primary winner, whoever that may be. The Democratic party has a personal interest in narrowing a field where the most electable and thriving campaigns are able to have the most time to campaign against one another before campaigning against what will most likely be President Trump’s reelection campaign.

The requirements to get on the debate stage should be strict.

For both the primary and the general election coming up, these candidates have the ability to change policy discussions with their words and represent the Democratic party to many independent and undecided voters. However, once those candidates have secured a podium on stage, they should be given the same amount of time on air as any of the other candidates to ensure equal representation and allow the American people a fair choice.

Moderators from both the first and second debates gave more favored candidates more time on-screen than those who were already not performing well in the polls. For instance, in the July debate, Warren spoke for a total of 18 minutes and 33 seconds compared to Gov. John Hickenlooper, who was only able to speak for eight minutes and 49 seconds.

A 10-minute difference in speaking time is obviously unfair, especially at such a crucial point in many campaigns' viability and reduces their ability to put out their message and encourage Americans to make a fair choice. Following this debate, Hickenlooper ended his campaign due to its inability to stay afloat in the current sea of candidates.

The road to the White House is characteristically difficult, and high standards should be a part of this process. But if candidates meet the bar, they should be given the same respect as candidates who reached the bar more easily in order to have a fair primary and, hopefully, a fair path to the presidency.