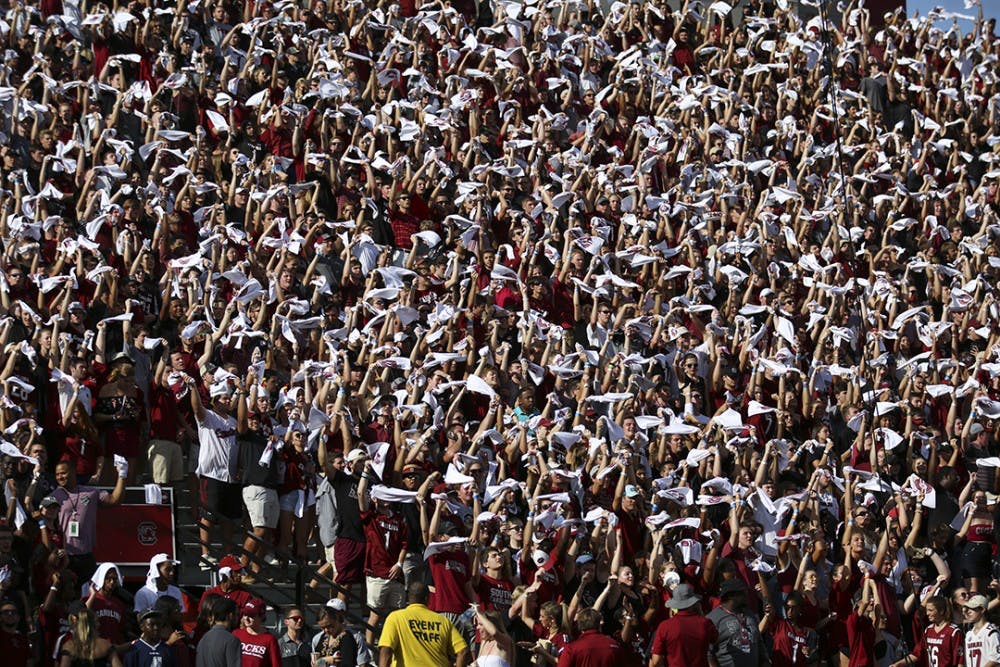 College football fans throughout the country — regardless of what colors they don on Saturdays — can practically already hear the "oohs" and "ahhs" of their home team’s crowd, envision their team’s first touchdown and picture themselves debating how AP polls will shake out throughout the season.

All of these things can only mean one thing: College football season is right around the corner.

Fans of the garnet and black are counting down the days until the Gamecocks play in front of their home crowd at Williams-Brice Stadium on Sept. 7.

For many South Carolina fans, the best part of game day is watching the action on the field. However, this feeling is not universal.

What is less of a debate is that current students, alumni and younger Gamecock fans who are already eager to send in an application all have a lot to look forward to on game day.

Below is a guide to the best moments and traditions of game day for those cheering on the garnet and black.

Before entering “Willy B”

For many, tailgating takes the cake when it comes to the biggest game day tradition in Columbia. Much can be said about spending time with family and friends, and there is even more that can be said about family time with delicious food, cold drinks, flat-screen TVs and tailgating games such as cornhole and KanJam.

Various options exist for tailgating enthusiasts in the area surrounding Williams-Brice Stadium. Before making their way into Willy B for the game itself (if they so choose), fans can tailgate in the fairgrounds, Memorial Lot, Fraternity Lot or one of the 22 Cockabooses located next to Gamecock Park. Before catching the shuttle to Williams-Brice, on-campus students might also socialize and tailgate at the Russell House where there's a sober tailgate offering free Chick-fil-a.

One of the most memorable aspects of game day for those inside Williams-Brice is watching the Gamecocks enter the field from the locker room to the tune of “2001: A Space Odyssey.”

The 80,250 pairs of eyes throughout the stadium are not the only ones watching the players run onto the field. Joining the team in the pregame entrance is South Carolina’s red-feathered, yellow-beaked mascot “Cocky” who reveals himself to the stadium crowd from behind a black cage as smoke zooms into the air.

Another tradition fans have grown accustomed to at Carolina football games is the “Game" and "Cocks” chant, in which half of the stadium emphatically yells “GAME” before the fans located in the other half follow up with “COCKS.” Various USC alumni, such as women's basketball legend A’ja Wilson, return to campus to lead the “Game-Cocks” chant before kickoff.

Another pregame mainstay at home games is the introductory video beginning with the phrase “Under a Carolina sky I stand.” Shown on the video board located behind the student section at the beginning of the game, “Welcome to Williams-Brice” never fails to get the crowd riled up moments before kickoff and remind everybody in the stadium that a legend can be made at any given moment throughout the course of the game.

Gamecock athletic events and Darude’s single “Sandstorm” are synonymous with each other, and football games at Williams-Brice Stadium are no exception. Fans from every corner of the stadium can be found waving a white rally towel as the song blasts on the stadium’s sound system. Many claim this Gamecock fan favorite does more than add to the atmosphere of Williams-Brice Stadium; it also makes the crowd part of the game itself.

Last football season featured a Sandstorm remix that will likely make its way back into Williams-Brice Stadium as early as the Gamecocks' second game on Sept. 7 against the Charleston Southern University Buccaneers.

"Mighty Sound of the Southeast"

South Carolina's marching band, nicknamed the "Mighty Sound of the Southeast,” continuously performs USC's fight song, “Go Carolina,” and “Sweet Caroline,” throughout the game, along with other songs to the delight of the crowd. Halftime at home features a performance from the marching band as the athletes take a break from the field.

Gamecock fans are well accustomed to the sight of fireworks shooting up from the scoreboard and the sound of a rooster crow over the loudspeakers. Both noises alert everyone in the stadium and those still tailgating or watching the game in the area surrounding Williams-Brice Stadium that the Gamecocks have found their way into the end zone for a touchdown.

Win or lose, a South Carolina football game would not be complete without the university alma mater at the conclusion of the game. The song concludes with the lines "Here's a health Carolina, forever to thee," as those in the stadium put their arms around each other and mime raising a glass. The marching band then follows suit with “Amazing Grace,” the last song performed each game day.