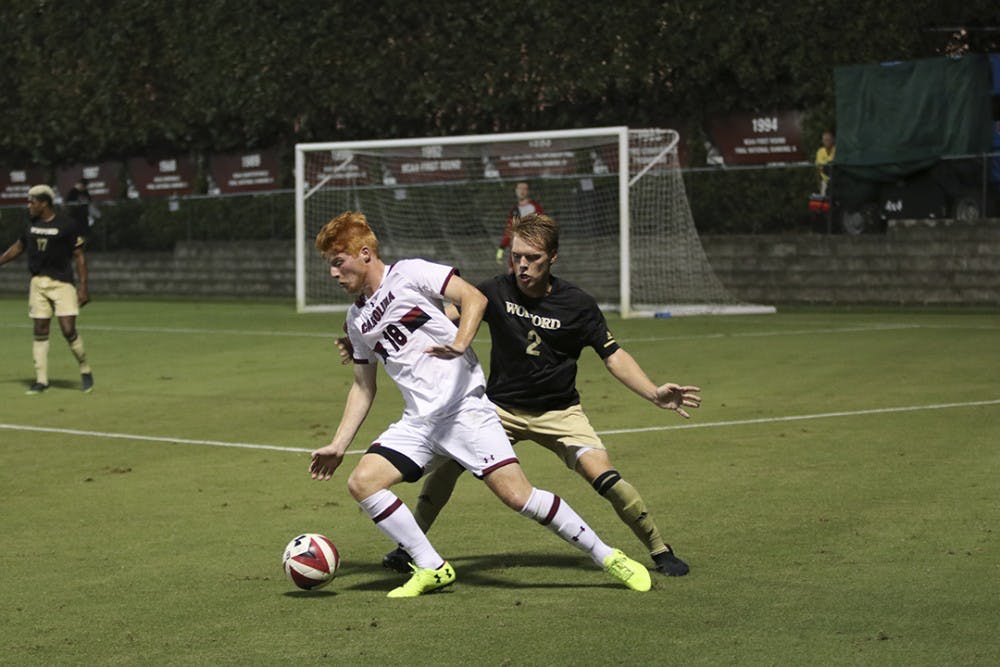 The Gamecocks have 12 new players, including nine freshmen. The team's top three scorers from last season are also returning.

The Gamecocks traveled to Duke on Aug. 17 to play the Blue Devils in their first exhibition game. One of the nine freshman, Brian Banahan, scored two second half goals to help the Gamecocks to a tie.

“I think this is really a starting point,” head coach Mark Berson told Gamecocks Online. “With the number of new guys we have here this year, it’s a great reference point as we learn all the things we do as a team on the road.”

South Carolina was trailing 2-0 before Banahan scored in the 57th and 66th minutes.

“With a young guy to get off the mark and score a goal, not just one but two, and the second one was pure class, rolled inside and whipped one to the back post,” assistant coach Justin Cook said. “Hopefully that will build up his confidence a little bit, and we will see more goals out of him.”

Nick Brady and Ryan Bilichuk each had two saves, as Bilichuk did not allow any goals in his 30 minutes of action.

Twenty-three of South Carolina’s players recorded playing time in the 2-2 tie, giving experience to prepare for the regular season.

“I thought the fact that we came back and scored two and had a couple other really good chances in a game that was end-to-end was good and showed a lot of character on the part of our guys,” Berson said. “I think overall for us, coming back on the road against a nationally ranked team to earn a draw is a good result.”

Sophomore forward Andrew Halloran emphasized the importance of the team’s experience playing on the road.

“Road experience is great, because not only is it you’re competing in a different environment than home, it’s you’re not as comfortable, more pressure,” Halloran said. “We have a lot of younger guys on this team, so as much experience as they get away from home in the new environments is great.”

The Gamecocks played their second exhibition at home in front of over 4,500 Gamecock students against the Wofford Terriers on Aug. 21. Twenty-three of South Carolina’s players recorded playing time again.

For the second-straight match, freshman Brian Banahan scored twice. South Carolina scored five goals in the second half, leading to a 7-1 win over the Terriers.

South Carolina also has a trio of incoming freshman earning All-America honors, according to TopDrawerSoccer. Mark Roby, Logan Frost and Ethan Rose were named All-Americans for their respective seasons.

Senior Luca Mayr was named to the Conference USA Men’s Soccer Preseason Team for the second-straight season. Mayr led the Gamecocks with 11 points in 2018 and earned Second-Team All-Conference USA honors.

The Gamecocks had the highest team GPA in Conference USA for the 2018-2019 school year. The team boasted a GPA of 3.521, marking the third-straight year receiving the Conference USA Sport Academic Award and the seventh time since 2005.