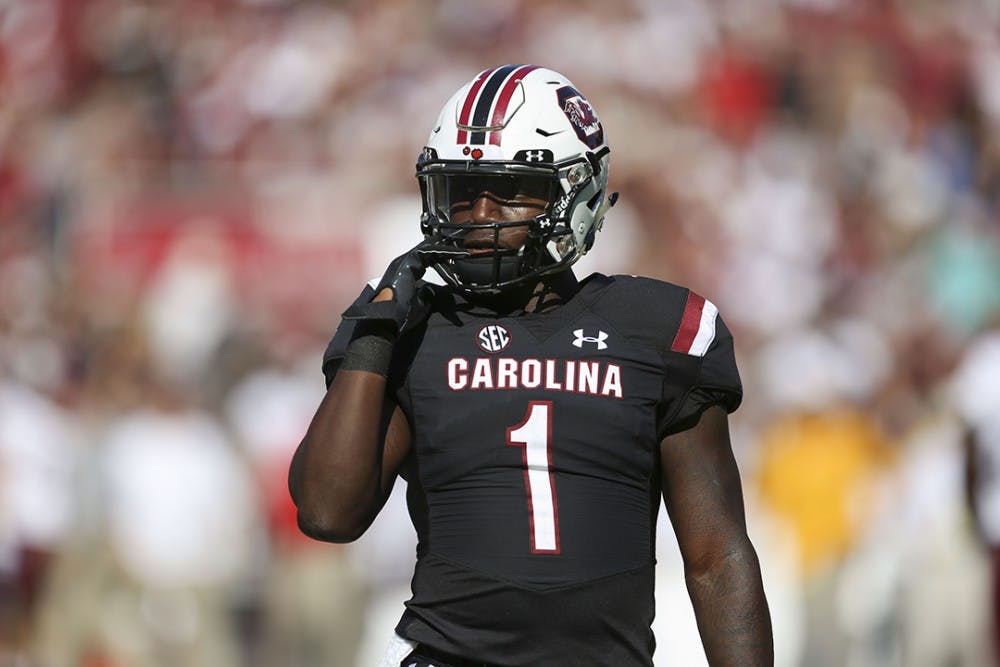 A look at South Carolina receiving corps without Deebo Samuel

After a 2018 season that wasn't what coaches, players or fans were expecting, South Carolina is looking for redemption.

The Gamecocks are preparing for a season to showcase the hard work they have put in this summer and the new recruits the team has acquired.

With each season, though, comes the absence of players who recently graduated.

South Carolina's receiving corps knows this all too well as they prepare for a season without star receiver Deebo Samuel. Samuel is now with the San Francisco 49ers after being selected in the second round of the NFL draft earlier this year.

Samuel ended his career at South Carolina with 148 catches for 3,457 yards and 28 touchdowns.

"The guy’s an outstanding football player — one missed tackle and he can score on you. But he’s also a gunner, he’s also a kickoff returner," head coach Will Muschamp said. "That’s not going to be filled by one person."

Although Samuel leaves behind big shoes to fill, the Gamecocks do have a receiving corps that contains more depth than recent years with players such as senior wide receiver Bryan Edwards.

Edwards is an experienced player who stepped up to play alongside Samuel last season. In 2017, when Samuel broke his leg in week three, Edwards took his place and ended the season with 64 catches.

“I feel like this is as deep as we’ve ever been,” Edwards said. “It’s always kind of been me and Deebo, and maybe one or two others, but now I feel like we got two, three guys who are going to come in and play.”

Muschamp said he's looking forward to the depth and talent that the Gamecocks have on this year's roster.

"I'm excited about Bryan going into his senior year,” Muschamp said. “He's worked extremely hard, and he told me he feels like he is in the best shape he's been in since he's been at Carolina. He's as strong as he's ever been."

There are also other returning wide receivers from 2018 that will help answer the looming question of how the offense will fare with Samuel.

Junior Shi Smith, who took the third spot last year behind Edwards and Samuel, is a versatile and capable player. He played mostly outside in the spring, but can also play in the slot. Smith thinks the Gamecocks are equipped with plenty of guys who can maintain success as receivers.

Another receiver, OrTre Smith, is back from a knee injury that kept him off the field for the entire 2018 season. When Samuel got injured in 2017, Smith had 18 receptions for 224 yards and three touchdowns as a true freshman.

There are also younger players on this 2019 football team that have the potential to create problems for opposing defenses, which has been a recruiting priority over the past few years for wide receivers coach Bryan McClendon.

Four-star recruit Keveon Mullins and three-star Xavier Legette are two freshmen joining South Carolina's team. While there will be a learning curve with Mullins and Legette, as there is with all freshmen, it will come down to more than just talent in the eyes of Muschamp.

Chavis Dawkins, Chad Terrell, Josh Vann and Randrecous Davis all also look to be factors in the 2019 South Carolina offense.

The Gamecocks and the wide receiving corps will begin the 2019 season with a game against North Carolina at Bank of America Stadium on Aug. 31. Kickoff is scheduled for 3:30 p.m.