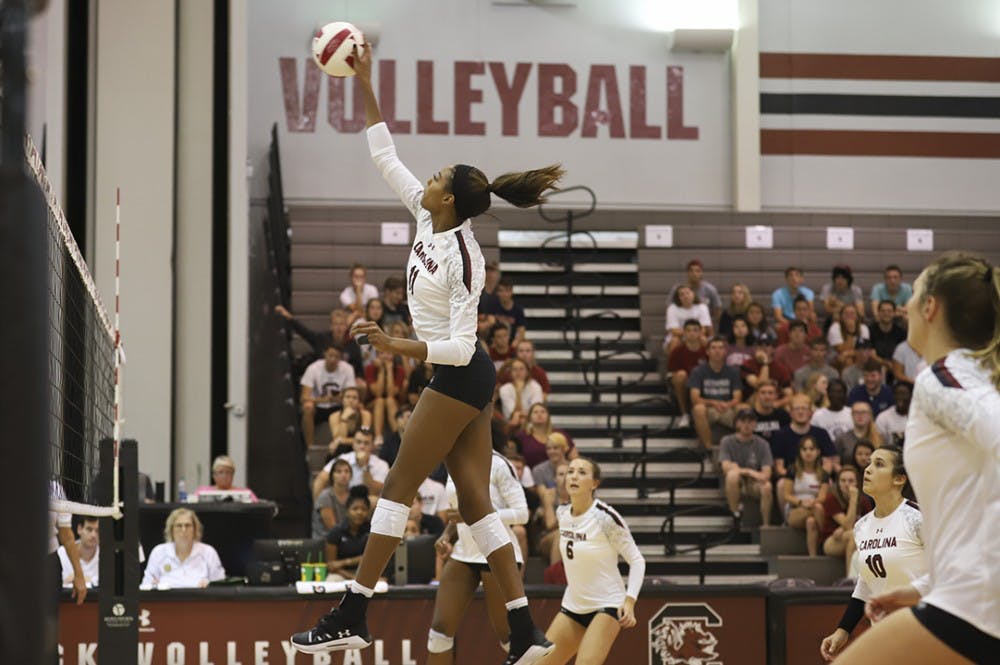 The Gamecocks swept the Charlotte 49ers to rise to 4-3 overall, led by nine kills from senior Mikayla Shields and two aces and four blocks from senior Claire Edwards.

The Gamecocks took the opening game, holding the 49ers to a negative hitting percentage for a 25-16 win. Junior Mikayla Robinson and senior Brittany McLean added three kills each for the offense. In addition, Edwards had a kill, a block, an assist and an ace; additionally, she led Carolina 9-1 to start the match.

The Gamecocks out hit Charlotte .483 to .000 and took a 2-0 lead in the match, with a 25-12 win. Alicia Starr had a total of three kills for six swings, while the defense held Charlotte to just six kills total in the set.

Edwards' efforts over three weekend matches earned her defensive player of the week honors from the Southeastern Conference.

The 49ers cut down on their earlier mistakes and hit .321 in the set, adding four blocks to push ahead 9-6 early. Although the Gamecocks were able to take the lead again, Charlotte tied the set up at 17 before a 5-1 run put them behind again. Junior Jess Vastine added four kills, three digs and two aces in the set. The second of the two aces was the game-winning point.

"I thought we came out really well," South Carolina head coach Tom Mendoza said in a press release. "We were really aggressive and that was one of our keys for today, making sure we were putting our self in a position to earn points and try to make plays as difficult as possible for Charlotte."

The team will turn their attention to rival Clemson on Thursday at 7 p.m. for the two-day Clemson Classic tournament. The Tigers swept Appalachian State Tuesday night, who were coming off a 1-2 weekend at the Duke Invitational.

Friday's slate for South Carolina features a match against No. 9 Wisconsin at 6 p.m.