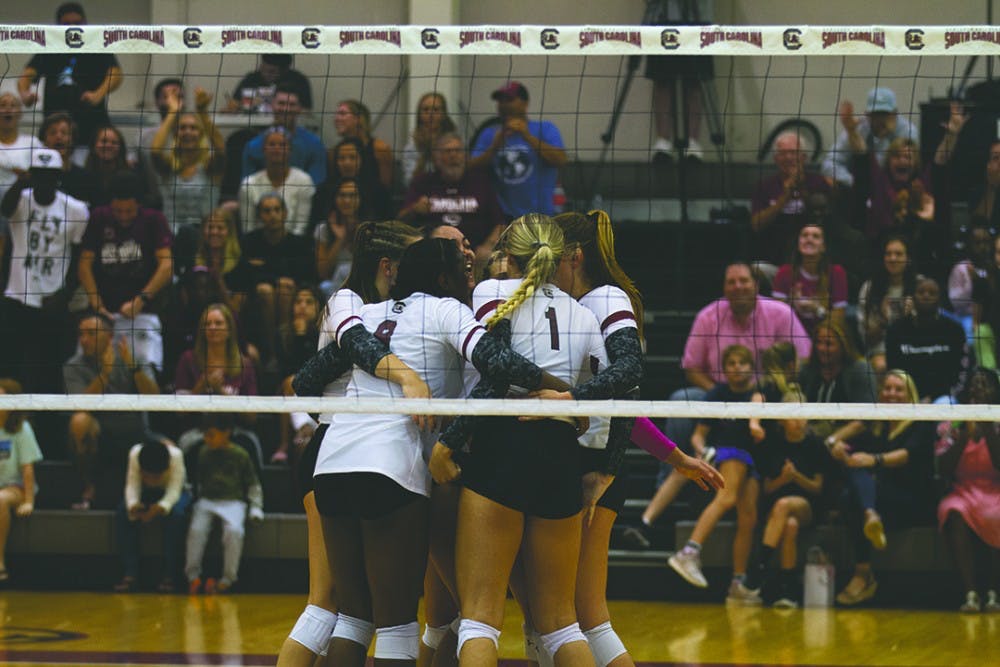 The South Carolina volleyball team spent the weekend in Orlando, Florida for the UCF challenge. After losing the first game against UCF 0-3 on Friday, the Gamecocks came back to beat Kansas 3-1 on Saturday and Albany 3-0 on Sunday.

“I love where we’re at right now. I love the way we’re playing,” head coach Tom Mendoza told GamecocksOnline. “I think we’re getting better each match and putting pieces of our game together, so hopefully we can keep going in that direction.”

Friday’s three-set match against UCF was tight. The first set was tied six times before the Knights broke out for a 25-21 win. The Gamecocks produced more kills than their opponent, but their five service errors proved unsustainable.

In the second game, there were 12 ties and six lead changes before UCF pulled out to win 27-25. The Gamecocks forced the Knights into a timeout after blocks from senior middle blocker Claire Edwards and senior right side/opposite Mikayla Shields resulted in South Carolina taking their biggest lead of the night at 22-19.

Following that, UCF broke out, going 5-0 and making a serve for the win. A kill by Shields and a tandem block by Shields and junior middle blocker Mikayla Robinson kept the game going until UCF’s back-to-back kills took the win.

In the third set, UCF took a 15-7 lead early, but South Carolina was able to pull ahead 23-22 with help from Shields and senior outside hitter/left side Brittany McLean before the Knights scored three points to win the game, bringing the final score to 25-23.

On Saturday, South Carolina gave Kansas its first loss of 2019 in four sets. In the first match, there were 16 ties and seven lead changes. The Jayhawks’ 24 digs resulted in a 27-25 win over the Gamecocks.

In game two, Kansas pulled ahead 17-11 before the Gamecocks rallied to score nine points and deny the Jayhawks a set point to tie it up. After a block from Edwards and junior outside hitter/left side Jess Vastine, a kill by Shields gave the Gamecocks a 27-25 win.

South Carolina’s seven blocks in the third game helped them to a 25-18 win. Six of those blocks came in the Gamecocks final 11 points, breaking them from a 13-all tie.

After an early lead from the Jayhawks in the fourth set, South Carolina outhit Kansas .414 to -.059, securing the Gamecocks a 25-13 win.

A dominant South Carolina was able to sweep Albany in Sunday’s three-set match. The Gamecocks made six blocks and allowed only eight kills by the Great Danes in the first set, winning 25-15.

The Gamecocks had 14 kills in their 25-18 win of the second set and held Albany to a .075 hit percentage. Shields, Robinson and Edwards put away three kills each.

In the final game, South Carolina won 25-8, their largest winning margin in three years. The Gamecocks produced 12 kills, four blocks and four aces. This match’s win puts South Carolina at a 3-3 record on the season.

“Albany’s a really good team, and that was our message to our group, getting ready for the third match of the weekend,” Mendoza said. “I really liked the way that our team came out and put pressure on them behind the service line, and then our block was good early ... I thought we got really good contributions up and down the lineup.”

Senior defensive specialist and libero Addie Bryant had her best night for defensive production on Friday’s match against UCF with 21 digs. Shields’ 14 kills in that match moved her up to seventh in program history with a total of 1,185 on her career.

Saturday was South Carolina’s first win against a Big 12 team since they swept West Virginia in 2012. Edwards’ eight total blocks were a career high.

South Carolina will take on UNC Charlotte for its home opener at the Carolina Volleyball Center on Sept. 10 at 7 p.m. The Gamecocks have a 3-0 record against the 49ers.