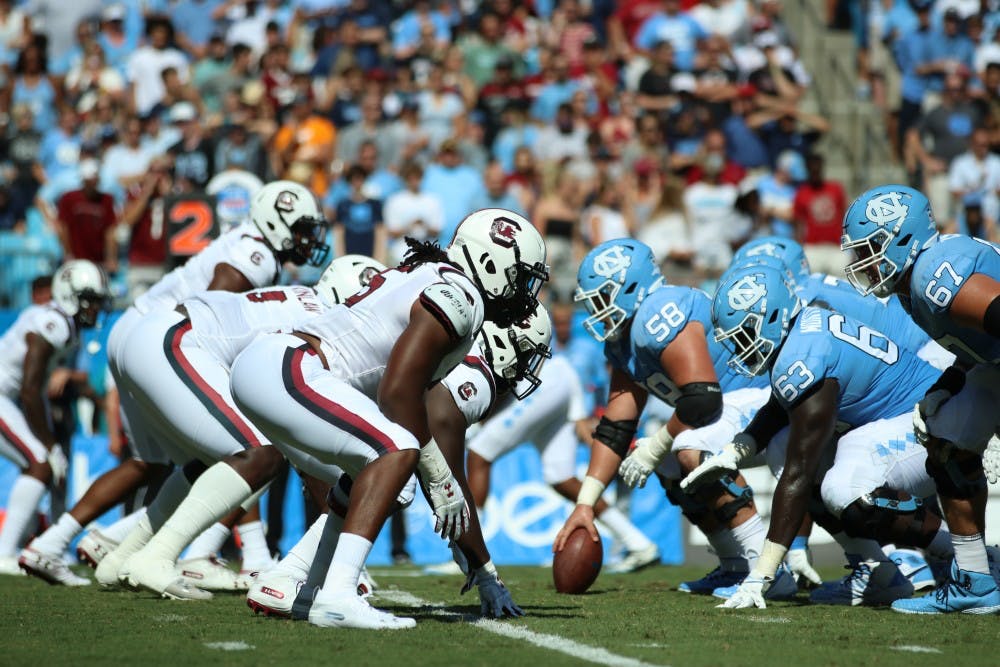 The South Carolina football team was unable to win in its season opener with a 24-20 loss against the North Carolina Tar Heels on Saturday evening at Bank of America Stadium.

The running game proved to be the bread and butter for the Tar Heels. North Carolina running backs sophomore Javonte Williams, junior Michael Carter and senior Antonio Williams combined for 232 yards on the ground.

“They have good backs,” head coach Will Muschamp said. “Their backs were real patient in their runs.”

However, the Gamecocks established a running game early in the match on their first drive. Redshirt senior Tavien Feaster and senior Rico Dowdle combined for 35 yards on the 58 yard drive to the Tar Heel 15 yard line before the UNC defense forced South Carolina to kick the 32 yard field goal, putting the Gamecocks up early.

North Carolina was able to respond with a scoring drive of its own as the Tar Heels marched all the way down to the South Carolina 11 yard line. However, thanks to clutch rush defense, the Gamecocks were able to stop the Tar Heels at the five and force them to take the game-tying field goal with 5:58 left in the first quarter.

The Gamecock offense did not let up on the ground on their second drive. Feaster ran for 42 yards on this offensive drive, including a 34 yard touchdown before the Gamecocks and Tar Heels traded field goals in the second quarter, making the score 13-6 in favor of the Gamecocks at halftime.

Despite this, the second half was a different story for South Carolina.

After the mid-game intermission at the Belk College Kickoff Game, the Gamecock offense was unable to produce in the second half, with the exception of a 22 yard touchdown pass from senior quarterback Jake Bentley to redshirt junior Kyle Markway. South Carolina went three and out on two possessions and turned the ball over twice.

“I thought the defense played well defensive and on offense we moved the ball well in the first half,” Muschamp said. “We didn't capitalize on some opportunities. We have to go back and look at the second half and see what we’re doing wrong.”

With the first game of the season in the rearview mirror, the Gamecocks will look to bounce back next Saturday at Williams-Brice Stadium, where they will take on the Charleston Southern Buccaneers. Kickoff is set for noon and can be seen on the SEC Network.