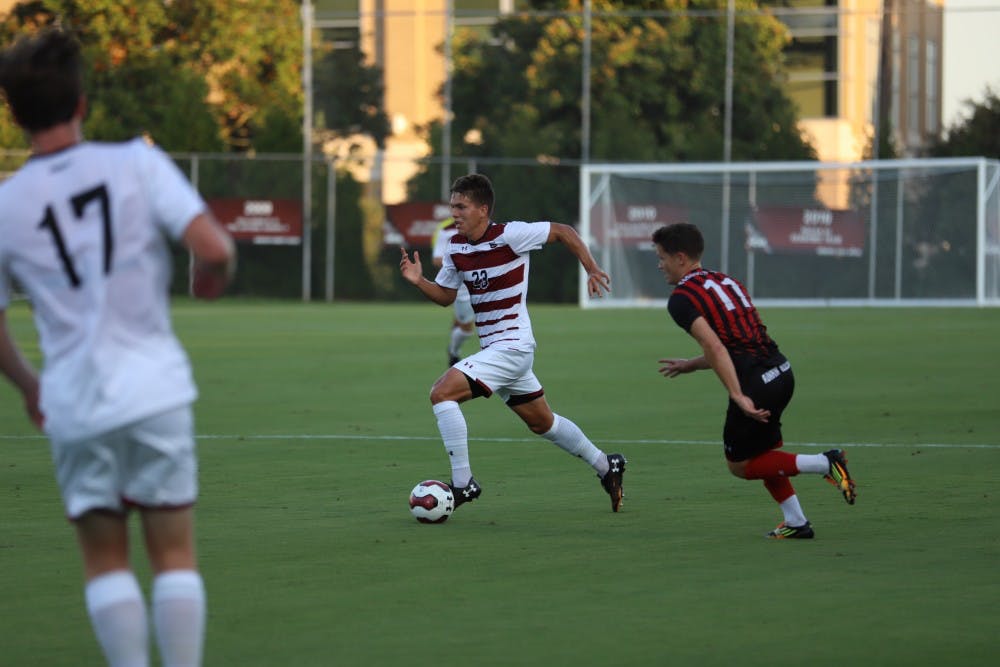 The South Carolina men’s soccer team faced off against Gardner-Webb University in the Gamecocks' home opener in front of a lively crowd of 2,233.

The Gamecocks' soccer team came into the matchup sporting an 0-1 record after falling to  in-state rival, the Clemson Tigers, 4-1 in the season opener on Aug. 30.

The Gardner-Webb Runnin' Bulldogs also came in with an 0-1 record, as the team fell to Charlotte 3-0 in its previous game.

The Gamecocks controlled the pace and time of possession early on, which resulted in two corner kicks for the Gamecocks within the first ten minutes of play.

The Gamecocks controlled the match for most of the first half, despite not scoring any goals. Freshman Tucker Monheimer had a chance to score, nailing a shot right over the crossbar. Fellow freshman Dylan Bartel missed wide right on a free kick from 21 yards out. Monheimer had a second shot at the goal, but Gardner-Webb goalkeeper Daniel Husa made a save, keeping the score tied at zero.

Gardner-Webb was not able to attack much in the first half, but almost scored a header off a corner kick. Gamecock junior goalkeeper Buenyamin Yusuflago was able to record the save and stifle the Runnin' Bulldogs threat.

The second half started differently. Gardner-Webb began on the attack and the strategy quickly paid off. Gardner-Webb forward Oskar Wang shot down the side of the field and bounced a shot straight off the goalie's chest, where his teammate forward Jorge Salgado was able to clean it up and tap it in.

Though Yusuflago made some mistakes as goalkeeper, he came through with several clutch saves as the game clock dwindled. Head coach Mark Berson said “the only thing that makes up for a mistake is hard work” and praised Yusuflago's "mental toughness."

The game entered the 78th minute with the Gamecocks still facing a 1-0 deficit, but a penalty in the box gave a penalty kick to South Carolina freshman forward Brian Banahan.

Banahan did not squander the opportunity and came through for the Gamecocks, tying the game with only eleven minutes left in regulation.

Monheimer said the goal was the "turning point" of the game and freshman midfielder Logan Hitzeman agreed: “As soon as we got that goal I think we all got a little bit of a second wind.”

Regulation time expired with the score tied 1-1 and the game went into a 10-minute sudden death overtime.

After a push by Gardner-Webb, which included a shot on goal by Wang, South Carolina marched back up the field.

Gamecock Defender Josh Corning passed the ball to Hitzeman while he cut beside the goal. Hitzeman then crossed the ball to Monheimer, who tapped the ball in, sending the home crowd home with the 2-1 win over the  Runnin' Bulldogs.

With so many young players on the team, Monheimer said he felt added pressure as one of the veterans. “Once we went into overtime, I felt like I had to step up," he said.

Coach Berson praised the resiliency of his young team for their comeback performance, which saved the team from starting 0-2 for the first time since before 2000.