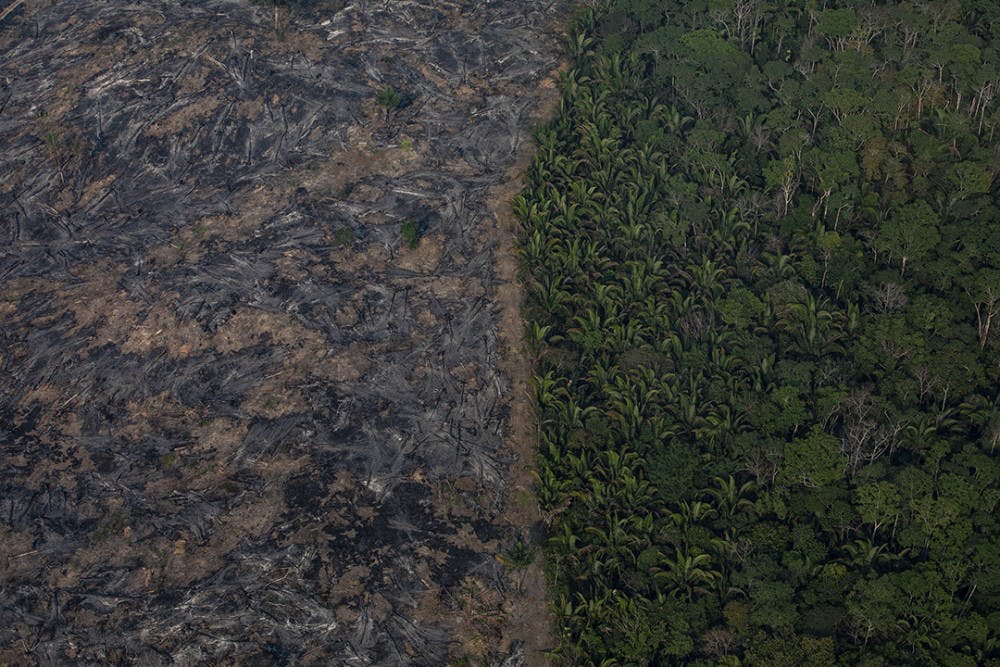 Opinion: Give up beef to help the rain forest

sYou would think that if the lungs of our planet were on fire, we would pay more attention.

The Amazon rainforest has faced a historic number of fires in 2019, totaling more than 80,000 fires so far this year. A key part of this increase is Brazilian President Jair Bolsonaro, who made it a campaign issue to use the Amazon for industry gain. Bolsonaro even fired the director of the National Institute for Space Research after data was released showing a stark increase in deforestation following Bolsonaro taking office.

On Aug. 29, 2019, Bolsonaro announced a 60-day ban on slash-and-burn agriculture, with a few exceptions. This is a common practice to clear heavily wooded land for agriculture and involves chopping down the shrubs, trees and plants of an area, then burning them to improve the quality of the soil. The only problem is that this tactic can quickly burn out of control and is very destructive to the flora and fauna of the Earth’s strongest buffer against climate change.

Even though the fires of the Amazon are burning out of control, Bolosonaro originally turned down G7 aid amounting to $22 million due to French President Emmanuel Macron’s push for action to stop the slash-and-burn agriculture, calling it an “insult” and accusing Macron of viewing Brazil as a colony.

Although Bolsonaro has said he would reconsider the deal and has already accepted $12.2 million in aid from the United Kingdom, this raises the question of why the Amazon is being burned at such an increased rate, and outside of donating millions of dollars, which may or may not even be accepted, what can we do to help?

To put it simply, the Amazon is being burned due to the consumption of beef. According to the United States Department of Agriculture, Brazil is the largest exporter of beef in the world and produces about 20% of total global beef exports.

Beef is the worst type of meat in terms of how much land is used to produce it. Cattle require a lot of land in order to be produced, and Brazil has turned to the Amazon to use as the next source for pasturing beef cattle. Additionally, beef also produces the most greenhouse gasses of any agricultural produce, totaling upwards of 105 kilograms of greenhouse gasses per 100 grams of meat produced.

So, what can individuals do to help save the rainforest from slash-and-burn agriculture? One thing is reducing the consumption of meat, specifically beef. Since beef is the primary reason for the burning of the Amazon, cutting out beef or reducing it would reduce the demand for beef and, in turn, the Amazon’s lands.

Now I know what you’re thinking — “Who is this person to tell me what I can or can’t eat? And steak is good! You can’t tell me to give up steak!”

I get it, I love steak and hamburgers and ground beef tacos like everyone else. But the fact is, the rate at which we consume beef isn’t sustainable anymore. It takes up too many resources and land with a marginal payoff afterwards. If more people chose to opt out of eating beef, the demand would decrease and so would the destruction.

You can reduce your consumption of beef by switching it out with pork, turkey or chicken in most foods, and only buying beef produced in the United States to discourage the importation of Brazilian beef. You could also try choosing to go meatless a few times a week, or try going fully vegetarian if you feel so inclined.

The Amazon, home of one in three animals in the world and one of the largest oxygen-producing forests in the world, is burning. This demands action and individuals can actually make a difference on this issue, so we should do something. Even if it as small as giving up beef.