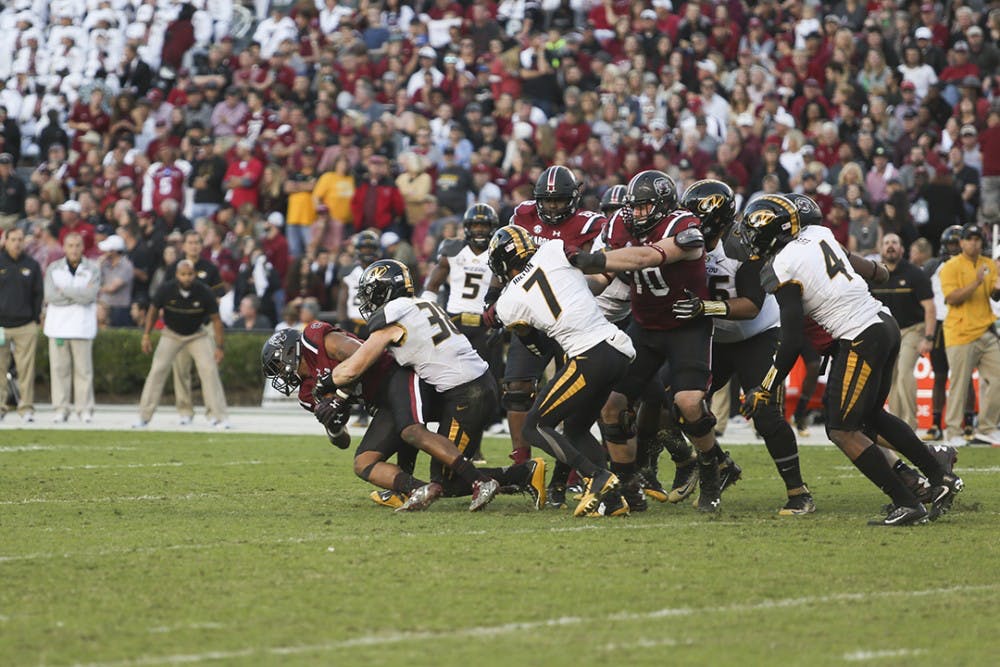 Q&A: The Maneater's Emily Leiker discusses Saturday's game between the Gamecocks and Tigers

As Sept. 21’s game against the Missouri Tigers approaches, The Daily Gamecock caught up with Missouri’s student newspaper, The Maneater. Sports editor Emily Leiker discussed the eighth edition of the Mayor’s Cup between the Gamecocks and Tigers.

Q: How do you feel about redshirt senior quarterback Kelly Bryant's play so far at Missouri?

A: I feel like Kelly Bryant is exactly the quarterback Missouri needed to transition out of the Drew Lock era. Lock was a homegrown talent and had such a strong connection with the Missouri fan base; Bryant is a good contrast to that and the fact that he chose Mizzou inspired a lot of hope for the program within people here. Bryant is also much more of a dual-threat than Lock was. I think he’s been impressive in the first two games, and although he left the West Virginia game early, he saved the Missouri offense against Wyoming, throwing for 423 yards and 2 touchdowns.

Q: Do you think the South Carolina-Missouri rivalry has grown over the past few years?

A:  I think the Missouri-South Carolina rivalry has definitely grown over the past few years, although it’s definitely more apparent in certain sports than in others. Personally, I think the place the rivalry pops up the most is on the women’s basketball court. After the 2018 settlement surrounding claims that Gamecock fans spit on Missouri players and Missouri AD Jim Sterk’s comments that followed, that’s definitely where I see the rivalry come to life. Granted, Sophie Cunningham – who I’m assuming is one of South Carolina’s least-favorite people – graduated this past spring and has moved on to the WNBA.  In terms of football, while there is reference to it being the “Battle of Columbia” and such, I don’t see it as being such a big thing around here. Yes, last year’s matchup was extremely frustrating for Missouri fans, but I don’t think that necessarily equates into a rivalry.

Q: Which South Carolina player do you think poses the greatest threat to the Missouri offense and defense?

A: Looking solely at stats, I think TJ Brunson poses the biggest threat to Missouri’s offense. Leading the team with 106 tackles last season, he seems like someone to pay attention to. In terms of South Carolina’s offense, I think Kevin Harris poses a threat. Missouri is so far 1-1 with handling the run game, and Harris’ 147-yard game against Charleston Southern shows he could be a threat in the position. I’m also interested to see how Ryan Hilinski stacks up against higher profile competition.

Q: Which Missouri player do you think poses the greatest threat to the South Carolina offense and defense?

A: Offensively, I think Bryant poses the biggest threat to South Carolina’s defense. He’s proven that he can extend plays when most other quarterbacks would be sacked, and he’s much more of a dual-threat than Drew Lock was. Defensively, Cale Garrett is the guy Gamecock fans should be most worried about taking down their offense. The senior linebacker had 16 tackles against Wyoming and an 8-yard sack against West Virginia.

Q: What is your prediction for the South Carolina-Missouri game and why?

A: My prediction for Missouri v. South Carolina is that Missouri will pull out on top in a similar fashion to how South Carolina did in last season’s matchup. Since it will be both teams’ first conference matchup, I think it will be really telling of how each will do in conference play because both have been pretty evenly matched the past couple seasons. Final score prediction: 35-24, Missouri.

The Gamecocks and Tigers are set to kick off at 4 p.m. EST in Columbia, Missouri at Faurot Field and will be televised on the SEC Network Alternate.