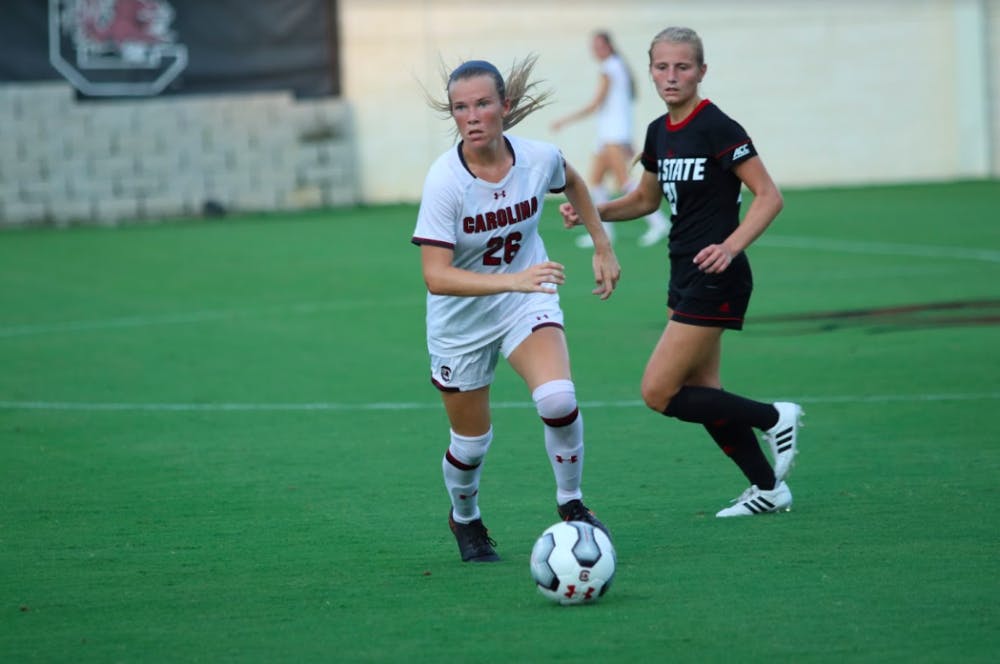 After shutting out Jacksonville and moving up yet another spot in the rankings this past week, the No. 7 South Carolina women's soccer team defeated Purdue 2-0 Friday night.

The first half was a slow one, with neither team making a shot until the 31st minute.

The game picked up from there. Junior Anna Patten, who just returned from playing with the England senior national team, scored the first goal of the night from a South Carolina penalty kick. This was her first career goal with the Gamecocks.

In the 42nd minute, South Carolina used a free kick just outside the Purdue box as an opportunity to score, making the score 2-0.

"We did a great job at handling a tough environment tonight against a great team on the road," South Carolina head coach Shelley Smith told Gamecocks Online. "Jyllissa [Harris] did a great job at seeing what she could do in that moment. I thought the team did a great job to read what the defense was giving and the space that needed to be taken advantage of."

Both shots in the first half for the Gamecocks resulted in goals.

With seven minutes left in the first half, Purdue had two shots and the first corner kick of the game.

Nearing the end of the second half, Mikayla Krzeczowski saved a free kick from Purdue to keep the Gamecocks in the lead at 2-0. This was her 36th career game with no goals scored while she was goalkeeper.

"We did a great job at covering for each other. Overall, they did a wonderful job at their one-on-one defending, and when they had any chances, there was always someone there to stop it, including Mikayla [Krzeczowski]," Smith said.

The 4-0 start is the first time South Carolina has won each of its first four matches since 2014, according to a press release.

South Carolina will play their second and final game of the Boilermaker Challenge Cup on Sunday morning against DePaul. The game will be at Purdue, the Gamecocks' first neutral site game of the year. Kickoff is set for 11 a.m.