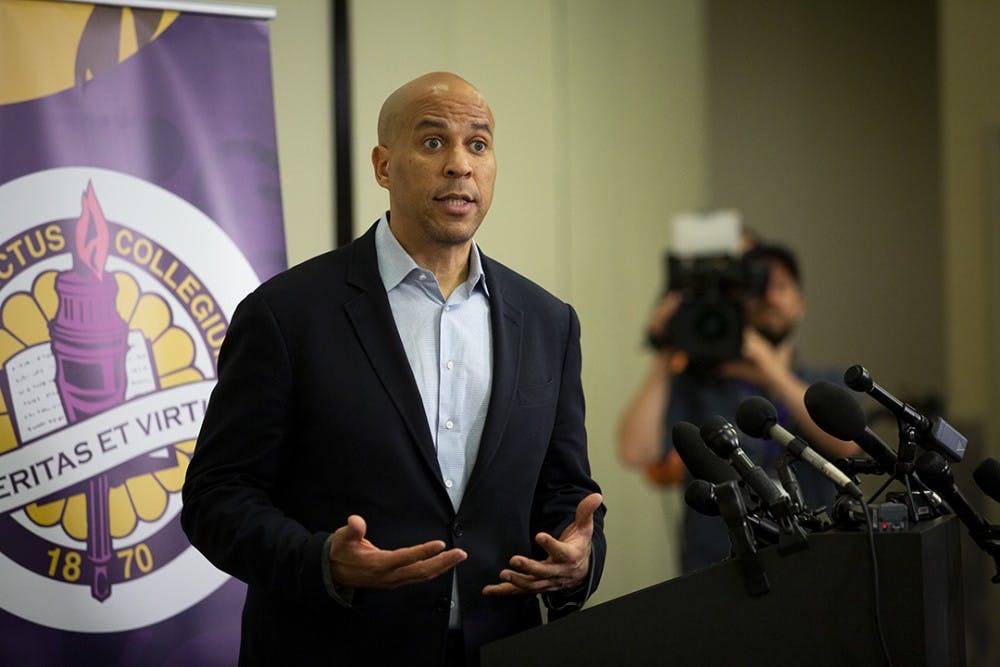 President Trump kicked off the three-day event Friday afternoon as the first presidential speaker of the weekend.

Benedict College permitted seven Benedict College students into the forum while placing the remaining students on lockdown and advising them to remain in their dorms during the presidential visit. The White House press pool and two South Carolina news outlets were invited while other South Carolina news organizations were not. A Benedict representative said this was due to security concerns.

Local groups like Building Better Communities and 350 Columbia organized anti-Trump  protests and began their march at Sen. Cory Booker's South Carolina campaign office on Taylor Street, a few blocks from the intersection separating Allen University and Benedict College. As protestors made their way to the Benedict College arch, they were joined by some Allen University students and met by Trump supporters.

The groups clashed, intermingled, debated and yelled at each other as they awaited Trump's arrival and during this speech.

"I'm here to condemn Benedict's administration and board of trustees for hosting this here," Benedict alumnus Shawn Torres said.

Torres, a 2013 graduate of the college, said he was disappointed with Benedict inviting Trump, because he feels the president isn't qualified to discuss justice reform because of his past comments advocating for the death penalty for the Central Park Five and campaign contributions from private prisons.

However, Pierre Wilson said America needs to move past who's qualified and disqualified to discuss issues, but rather focus on what's getting done. Wilson, 30, said it was important for him to be there to tout the First Step Act and its impact because he said it doesn't get enough media coverage.

"You're gonna miss all the things that he's done, like opportunity zones, the urban revitalization act, this criminal justice reform bill that we're here for today, you're going to miss so much," Wilson said. "We have to bring these conversations to where the people are."

After President Trump’s visit on Friday, 10 Democratic presidential nominees visited Benedict College over the weekend to share their plan for criminal justice reform.

Although the candidates represent different backgrounds and levels of experience with criminal justice, they agreed on many policy positions, including legalization of marijuana, ending private prisons and ending the cash bail system.

Harris made headlines Friday evening when she abruptly backed out of the event hosted by the 20/20 Bipartisan Justice Center over the award given to President Trump and the alleged exclusion of Benedict students in the event.

“On this issue of criminal justice reform, that coupled with the fact that the sponsors of the program were at an HBCU but essentially excluding the students from access, both because it was a paid event and because they only allowed, I believe, seven students to attend, I’ve heard stories of students being told they should stay in their dormitories or rooms while he was on campus,” Harris said.

The California senator rejoined the event after Benedict College took full control of the event with the help of Columbia Mayor Steve Benjamin.

“As a proud graduate of an HBCU, as someone who has worked on criminal justice reform, yes, I said I would not participate,” Harris said.

Booker held a central position in Saturday’s lineup as the author of the Next Step Act, a bill that would overhaul the American criminal justice system by legalizing marijuana and ending the War on Drugs.

“We have a nation right now that has fueled mass incarceration. Since 1980, the prison population in this country going up 500%, overwhelmingly fueled by a war on drugs, which has not been a war on drugs, it’s been a war on people, poor people, disabled people, addicted people and disproportionately black and brown people,” Booker said.

Buttigieg expressed solidarity with the black community as a gay man.

“As someone who knows what it’s like to see your rights come up for debate in the political square, somebody whose marriage exists by the grace of a single vote on the United States Supreme Court, I have an understanding of why political decisions matter,” Buttigieg said.

Sanders had more to say against Trump’s inclusion at the event.

“When you have a president who is a racist, a sexist, a homophobe, a xenophobe and a religious bigot, the word ‘justice’ and ‘Donald Trump’ do not go into the same sentence,” Sanders said.

Biden ended the list of candidates visiting Saturday and commented on the resilience of the crowd.

“As my mother would say, ‘God love you,’ you’ve been here all day. My lord, you may feel like you’ve been incarcerated,” Biden said.

Biden also made note of the consistency of the platforms of the candidates.

“We Democrats don’t disagree on the substance of how much we have to do to deal with incarceration and unfair criminal justice system, as well as the value of HBCUs,” Biden said.

Warren was the first candidate to take the stage on Sunday and started by “setting the table” for criminal justice discussion.

“The first part where I start are with the four words carved above the entrance of the United States Supreme Court: ‘Equal Justice Under Law,’” Warren said.

She described some of the biggest problems with the current system.

"We have a system that criminalizes being poor. Why do you think somebody sleeps on a park bench, because they got a nice house waiting for them? No, it’s because that’s all they’ve got,” Warren said.

Gabbard, the final candidate to speak at the event, emphasized the need for bipartisan action to push criminal justice reform.

“Not too long ago, we saw the passage of the First Step Act through Congress. This whole conference has been called the Second Step Forum, right? We passed the First Step, and we did so because of bipartisan support,” Gabbard said.

The HBCU straw poll, which was originally scheduled to be concluded at the end of the conference, was pushed until Nov. 11. The poll is intended to measure the popularity of candidates at the event and is only open to HBCU students.