Defensive struggles too much for Gamecocks to overcome against Tennessee 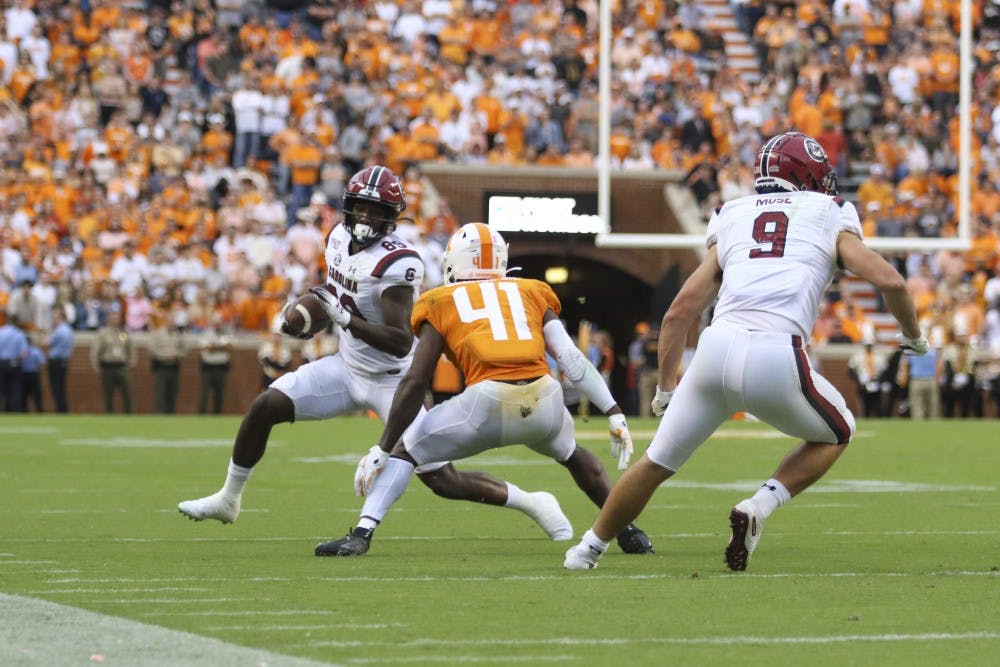 The South Carolina Gamecocks lost to the Tennessee Volunteers 41-21 on Saturday night at Neyland Stadium.

The divisional game put two freshmen quarterbacks against each other in front of a crowd of 87,397.

The freshman quarterback for South Carolina, Ryan Hilinski, did not take long to get comfortable, finding junior wide receiver Shi Smith on a slant that he took for 75 yards to the house. This gave the Gamecocks an early lead.

While Hilinski started out quick, the same cannot be said for J.T. Shrout, who was subbed out in favor of redshirt junior quarterback Jarrett Guarantano.

He would not re-enter the game until midway through the third quarter, when Guarantano had to leave the game due to an injury.

While Shrout struggled early, he settled in during his second chance. He ended the night with 122 passing yards and his first career touchdown.

The Gamecocks were not able to get much going on the ground. The only running back able to gain any traction was redshirt senior Tavien Feaster.

With senior running back Rico Dowdle inactive for the game, the Gamecocks were already low on running backs, and the only one able to do anything in this contest was Feaster, who accounted for more rushing yards than the entire team.

He finished the game with 80 rushing yards and a score. With three sacks and an inability for anyone other than him to run the football, South Carolina as a team only accounted for 78 yards on the ground.

The first half ended with the Gamecocks up 21-17, but after that, it was all Tennessee.

The Volunteers dominated the second half, scoring 24 points while holding the Gamecocks scoreless in the half.

Senior offensive lineman Donell Stanley said that for the team to be successful, “we just got to mature up as a group,” and Feaster said the team "wasn’t desperate to make plays."

Tennessee came through with a statement victory, defeating South Carolina 41-21.

With the first half winding down, the Gamecocks found themselves losing in a tight battle until Edwards made a one-handed catch over a Tennessee defender.

Though Edwards was hesitant to say this was his best catch ever, Feaster said it was the best catch he has seen.

Muschamp said his receiver's one-handed grab was, “As good of a catch as I’ve seen.”

The catch set up a go-ahead one-yard touchdown run from Feaster. This gave the Gamecocks both the lead and momentum heading into the half, but it did not last long.

Midway through the fourth quarter, the Volunteers found themselves with a 13-point lead. Vols senior linebacker Daniel Bituli recovered the ball in the end zone after a teammate got a hand on redshirt senior punter Joseph Charlton's punt to seal the game.

This blocked punt was not the only special teams mistake from the Gamecocks, as they also gave up a 65-yard punt return touchdown to Volunteer wide receiver Marquez Callaway.

The real story of this game for the Volunteers offensively was redshirt senior wide receiver Jauan Jennings, who had a record-setting day.

On the first touchdown, he broke through three different Gamecock tacklers on his way to a 19-yard touchdown.

On the other touchdown, Robinson beat Gamecocks' Georgia game hero sophomore defensive back Israel Mukuamu on a deep slant for a 48-yard score.

Muschamp said, “We did not cover 15 and 1 the entire ball game,” and Brunson echoed that sentiment saying “We just have to execute to the best of our abilities."

Both of these receivers burned the Gamecocks' secondary on multiple occasions.

"We had a hard time matching up with those guys," Muschamp said.

The South Carolina Gamecock football team will compete again Nov. 2, when they host the Vanderbilt Commodores. Kickoff is scheduled for 7:30 p.m. and will be televised on the SEC Network.