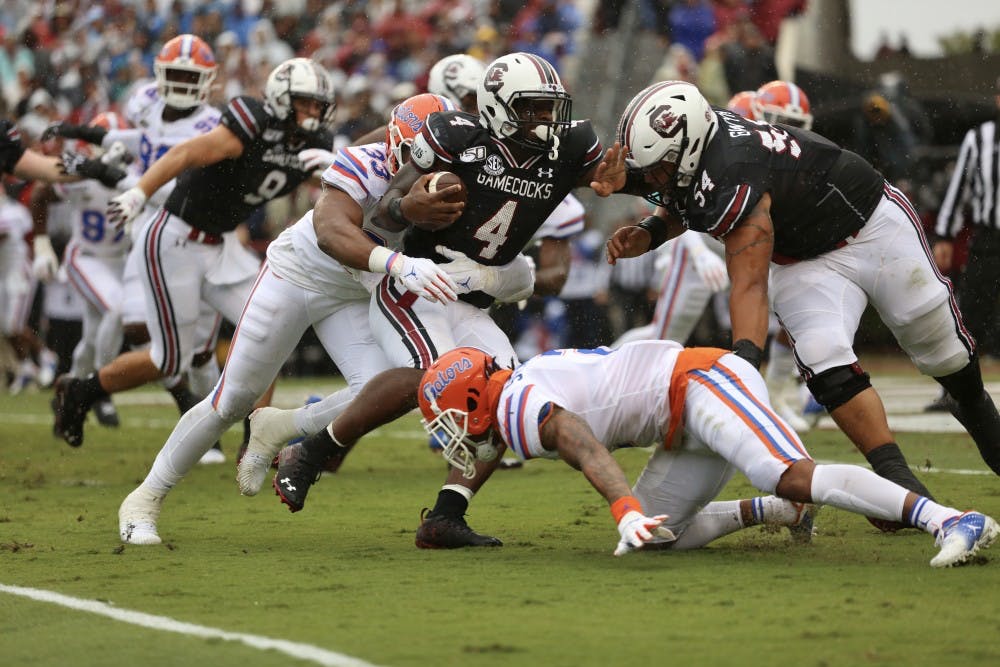 The Gamecocks took the field at Williams-Brice Stadium in front of a crowd of the 78,883 fans in attendance for a rain-soaked game and lost to their SEC East rival team, the Florida Gators, 38-27.

South Carolina scored first, but a 37-yard touchdown pass from Florida's redshirt junior quarterback to redshirt freshman Jacob Copeland tied the game at 10 going into the second half.

The Gamecocks were able to score first out of the half from a 21-yard touchdown run from senior Tavien Feaster.

Florida answered back with a 75-yard touchdown run by sophomore running back Dameon Pierce.

Florida also converted on a 4th and 3 to set up a 25-yard touchdown reception for senior wide receiver Freddie Swain, which gave the Gators their first lead of the game at 24-20.

Head coach Will Muschamp said this play was "critical" and it was a major turning point of the matchup.

Florida went on to score 14 more points. These points came from quarterback Kyle Trask, who ended the day with 200 yards and four touchdowns. He also threw an interception.

The Florida Gators ended the day with a 38-27 victory over the South Carolina Gamecocks.

After the game, several players stressed the importance of closing out games. Sophomore linebacker Ernest Jones said the team just has to work on "finishing." Feaster echoed the statement and said they just have to "finish games."

The Gators now find themselves 7-1 overall and 4-1 in the SEC, with one loss to LSU last week.

South Carolina's offense did not wait long to get creative.

Offensive coordinator Bryan McClendon drew up a flea flicker on the second play of the game and freshman quarterback Ryan Hilinski was able to hit senior wide receiver Bryan Edwards for a 41-yard strike.

This set up an eventual 1-yard rushing touchdown by redshirt senior running back Mon Denson.

The Gators won the toss and deferred, so they received the ball at the beginning of the second half.

South Carolina freshman cornerback Jammie Robinson picked off Gator's quarterback Kyle Trask to give the ball back to the Gamecocks in good field position.

Feaster took advantage of this and came in for a 21-yard touchdown run.

The Gamecocks' ground attack had a solid day, despite an injury to senior running back Rico Dowdle that ended his day after a single carry for 8 yards.

Feaster and Denson saw an uptick in carries due to the injury and both backs.

Feaster ended with 175 rushing yards, including a career long 37 yard rush, while Denson accounted for 58. They each accounted for a touchdown on the ground.

Feaster said this was a chance to for him to "prove myself to the coaches" and putting up the gaudy numbers he was able to today certainly makes a statement.

While the run game worked well, Hilinski never looked quite right throughout the game. He could not connect on the deep ball, despite having Edwards and junior wide receiver Shi Smith create space. He overthrew the receiver on the majority of his deep passes, except for the early flea flicker.

One possible explanation for this could be the minor knee sprain from last week's Georgia game, as the injury could be taking a toll on his accuracy.

Hilinski ended the day with 170 yards and a touchdown late in the fourth quarter to redshirt sophomore wide receiver OrTre Smith.

The Gamecocks go on the road to face the Tennessee Volunteers in a critical SEC East matchup. Kickoff is scheduled for 4 p.m. and the game will be televised on the SEC network.