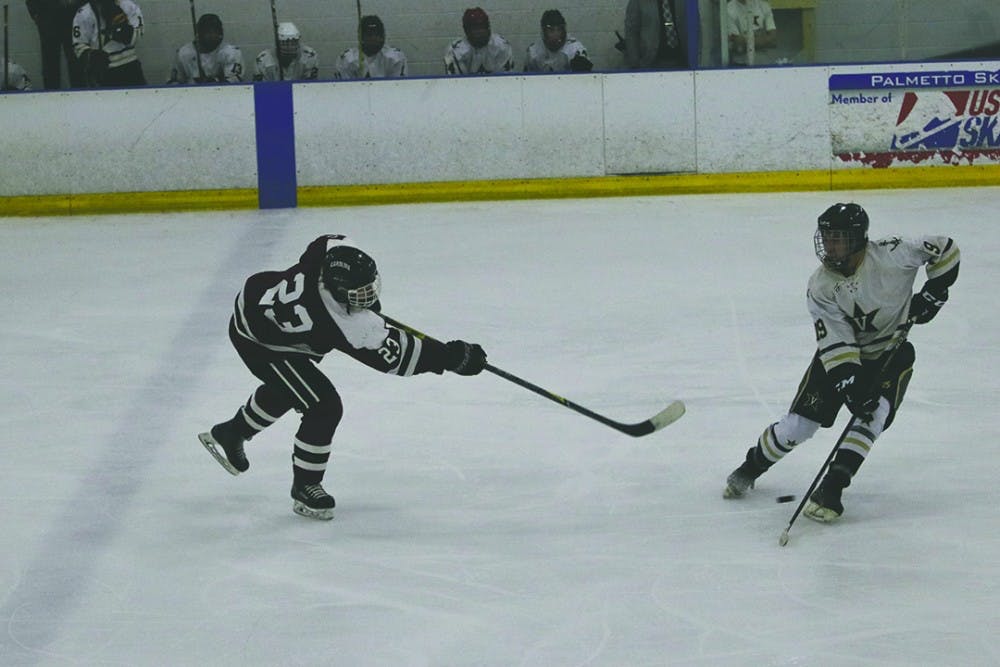 The Gamecocks' club hockey team is off to a great start in its 2019-20 season after losing in the first round of the American Collegiate Hockey Association (ACHA) Division III Tournament last season.

South Carolina is sporting an undefeated record with a 6-4 win over arch-rival Clemson, a pair of wins over the Chanticleers of Coastal Carolina and the Vanderbilt Commodores to begin the season.

The Gamecocks have a lot of talent that has returned from their 2019 ACHA D3 Tournament team with sophomore captain Cameron Mecca leading the way as he led the squad with 15 goals last season and junior forward Ian Powderly not far behind with 11 goals.

Now with the new season underway, Mecca and Powderly have not missed a beat.

In his first three games of the season, Mecca accounted for one-fourth of his goals last season with six goals so far, including a two-goal game in the Gamecocks’ season-opening win over Clemson.

Powderly is also continuing his dominance on the ice with two goals and five assists through the first five games.

There are also a good number of newcomers for South Carolina that are making an impact early including freshman forwards Owen Thomas with six goals and Michael Bolger with five goals this season.

Freshman forward Chad Lizine also adds fresh talent to the team as he is tied with freshman defender Ryan McGowan for leading the Gamecocks in assists this season with six.

“It was, I guess, a little tough at first,” Thomas said. “You could tell in the first game we were a little bit like off, just getting into the groove.”

This freshman dominance also translates to the goalkeeper position with not one, but two freshmen goalkeepers protecting the goal in Tripp Russell and Liam Gormley.

Russell leads South Carolina in saves with 96 including 46 saves in the team’s victory against Clemson. Gormley also made an impact between the pipes with 21 saves in the Gamecocks’ 8-5 win over Coastal Carolina and he allowed no goals in the 7-0 win over Vanderbilt.

“They’re just solid all around,” head coach Allan Sirois said. “They can move very well, they can play the puck very well too, which we haven’t had last season. It obviously was an upgrade from last season, not taking away nothing from [the goalkeepers].”

The Gamecocks will now turn their attention to another SEC Hockey Conference (SECHC) opponent in the Florida Gators (1-2, 1-2 SECHC) for a pair of games.

The Gators are coming off of a 9-8 win over Tennessee and will play Alabama-Huntsville, Florida State, and Embry-Riddle before traveling to Irmo to face South Carolina.