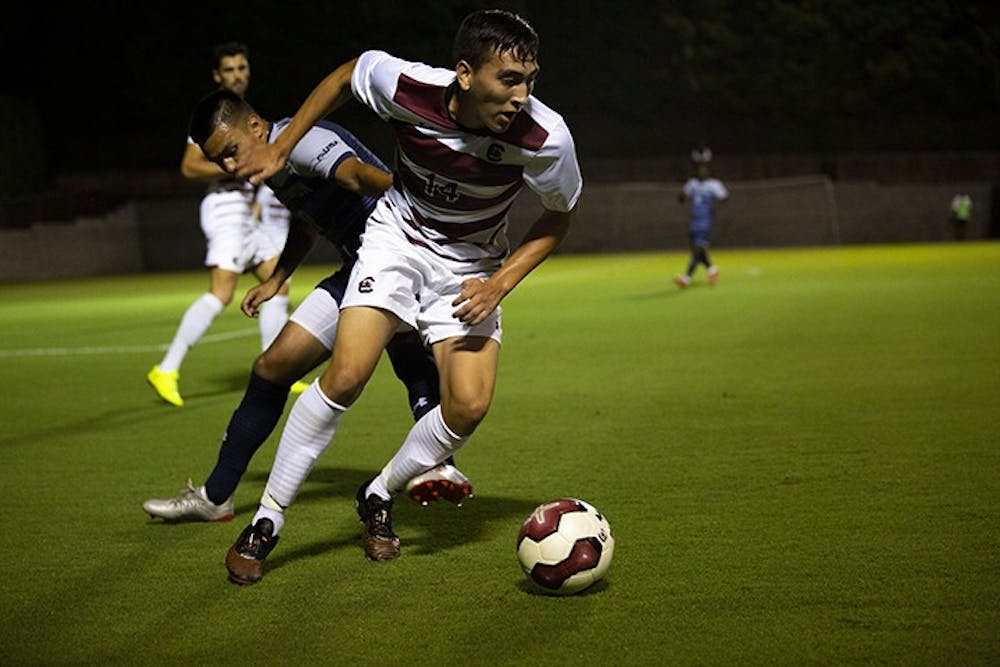 The Gamecocks faced off against the Monarchs in a Saturday night Conference USA battle. Both teams came into the game searching for their first conference win of the year.

South Carolina entered the night boasting a 5-4 record with two of those losses in conference play.

The Monarchs came into Columbia struggling, having only one win. They began the game with a record of 1-6-1, including 0-2-1 in conference play.

The Monarchs came out of the gate quickly, as opposed to the Gamecocks, who had a sluggish start to the game, and were able to get on the scoreboard early with a goal from redshirt junior defender Tom Westenberg.

The Gamecocks were able to tie the game up after an Old Dominion defender headed in a corner for an own goal. This was not the only own goal of the contest as South Carolina notched one of their own in the second half.

“Those unfortunate things are going to happen,” head coach Mark Berson said, who was more concerned with the team's offensive struggles than the own goal.

Unfortunately for the Gamecocks, this would be the difference in the match as the Monarchs came away with a 2-1 victory.

With this loss, the Gamecocks remain winless in Conference USA (0-3).

The Gamecocks threatened late with less than fifteen minutes left to go as senior midfielder Luca Myar got a good shot off, but Old Dominion's freshman goalkeeper Djibril Doumbia was able to make a beautiful save to protect the Monarchs' lead.

The Gamecocks also had a chance to score with under two minutes to go as Myar was given a free-kick from roughly 10 feet out of the box, but he missed wide right.

Coach Berson spoke highly of his senior and his ability to create scoring opportunities, saying “Luca took four shots tonight and the rest of our forwards took one, so that should tell you a little bit about the performance he had tonight.”

Despite these late pushes, Berson said, “We did not create the number of chances we wanted or the quality of chances,” regarding the team's offensive performance.

South Carolina started off the game very slowly, as Old Dominion seemed to completely dominate the first part of the game.

While the game was not completely one-sided, the Gamecocks' lackluster offensive performance and failure to convert scoring opportunities made it easier for the Monarchs to come away with a win.

Berson said simply, “We were trying to push but we did not have good offensive production tonight.”

The Gamecocks have had their fair share of offensive struggles throughout the season, so this will clearly be a point of emphasis for the coaching staff moving forward.

The Gamecocks will host the Georgia Southern Eagles on Tuesday at Stone Stadium. The game is scheduled to start at 7 p.m. Gates are scheduled to open at 6 p.m.

Following that match, South Carolina will have a chance to pick up a seemingly elusive first conference win of 2019 against UAB on the road Saturday.