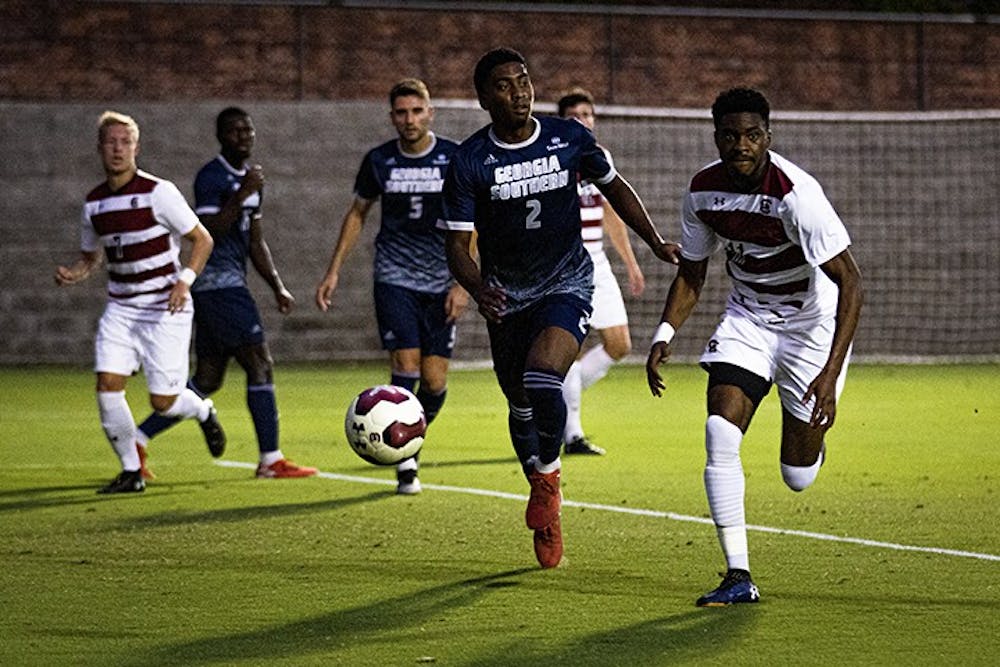 The South Carolina men's soccer team's match against Georgia Southern on Tuesday night went into overtime and ended in a tie.

The Gamecocks came in off a loss to conference foe Old Dominion, sporting a 5-5 overall record. The team remains winless in conference play, 0-3 on the season.

The Eagles also have a 5-5 overall record and have not begun their conference play. Their last outing resulted in a 3-2 win over Wofford.

The first half of the game was even, with neither team able to take control of the match. Both teams struggled to create offensive opportunities.

The lone goal of the first half came off a goal kick, in which South Carolina junior goalkeeper Buenyamin Yusufoglu punted the ball into the back of Georgia State sophomore forward Adam Davie's head. The ball then ricocheted into the goal and Davie was credited with the goal.

The second half was much of the same, and both teams struggled to produce offensively.

Junior forward CJ Mitchell-Smith said the team focused on "[staying] composed" in the final minute of regulation. Mitchell-Smith came through with a goal to send the game into overtime.

Senior midfielder Luca Mayr was credited with the assist on the game-tying play.

The first period of extra time did not yield any goals and the game was forced into a second ten-minute sudden death period.

Neither team was able to score during the second period of extra time, ending in a 1-1 tie.

The Gamecocks and the Eagles now have identical records of 5-5-1 on the season.

While South Carolina might not have started out the game quickly, the Gamecocks looked like a rejuvenated team coming out of the half.

They were not able to initially score, but the offense controlled the ball better early in the second half. The forwards, such as senior Tucker Monheimer and freshman Logan Frost, were able to take more shots.

This newfound energy the Gamecocks played with was unable to crack the scoreboard until the last minute of the game. Sophomore goalkeeper for Georgia Southern, Jose Eduardo Bomfim, recorded five saves before the last-minute goal tied the game, three of which South Carolina head coach Mark Berson described as "unbelievable."

While the production did not come until the last minute of the half, the team's apparent shift in aggressiveness was key to sending the match into extra time.

Berson was optimistic about the improvements the team has made, saying they  “created a lot of good chances” in the contest despite only recording one goal.

While the team still has more to work on, Mitchell-Smith credits the coaches with giving the offense  “more freedom” in the second half and said the team had to get "creative" to score with time expiring.

The Gamecocks hit the road for an away matchup against University of Alabama Birmingham Saturday at 7 p.m. This contest will give the Gamecocks a chance to earn their first Conference USA win of the season.