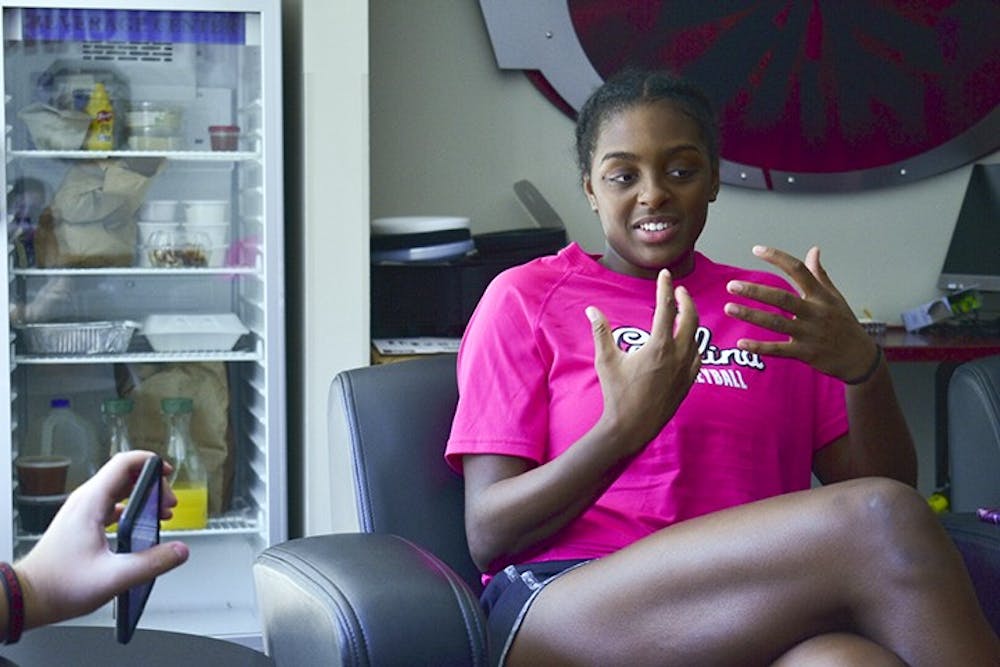 When Mikayla Shields stepped foot on campus as a volleyball recruit on her official visit during a camp a few years ago, she knew that South Carolina was going to be her future home.

And Shields has since settled in comfortably at her new home. The senior is attempting to lead her team to back-to-back NCAA tournament bids and establish a new standard at South Carolina.

“When I first came into the gym, I just got this huge sense of family and huge sense of belonging,” Shields said. “I had been to a couple of other schools at that point, and this was the first place that I had ever gotten that feeling.”

Adjusting to college life is something that every freshman has to go through, but for student-athletes, it’s an even bigger adjustment that comes with more challenges, such as meeting and getting along with new teammates and coaches.

Despite these challenges of adjusting early on as a freshman, Shields’ determination and confidence was present. Shields led the Gamecocks with 341 kills and a .308 hitting percentage in her first season in 2016.

This confidence and determination is something that runs deep in her family. Her parents, Brett and Najuma Shields, were both track and field student-athletes at the University of Pittsburgh.

“I think it’s her drive to do everything well,” Brett Shields said about his daughter’s early success. “I think it shows up in her performances in the classroom as well as on the court.”

For Mikayla, it boiled down to track and field and volleyball, but she ended up choosing the sport she enjoyed more.

Shields spent the summer of 2017 training with the U19 national volleyball team, representing Team USA at the Pan American Cup, where the team won gold.

Shields said this exposure on a national level enhanced her game, as she learned from some of the best players and coaches in the country.

“I really loved being able to go and have ‘USA’ strapped across my chest. That’s such an incredible feeling," Shields said. "I came back and I felt like I learned a lot and had a lot of knowledge … that was really cool as well.”

This experience proved to be beneficial — Shields made the All-SEC team in her sophomore season the following fall. She was the first South Carolina player to do so since 2013.

As a junior last season, Shields became the fifth junior in program history to reach 1,000 career kills in three seasons.

Despite all of these accomplishments, one that Shields holds near and dear to her heart occurred last season: The Gamecocks' appearance in their first NCAA Tournament in 16 years.

Shields said one of the goals she had coming into this program was to build a legacy and new standard for the South Carolina program and that had to start with an NCAA Tournament berth.

“To be able to be there in that moment and start that last year, and to hopefully continue that this year is so, so cool,” Shields said. “This year, I think it's a matter of not becoming complacent and not becoming okay with being okay. To be great, you have to work every day at being great.”

No matter what the 2019 season has in store for Shields and the Gamecocks, Shields is living out her dream of being a student-athlete. Even though her parents were both student-athletes, Shields has found her way at South Carolina on her own path.

And as always, the support of her parents will never fade.

“I don’t think there’s anything more gratifying as a parent than to see your kids succeed, and in some respects, do it better than we did,” Brett Shields said. “She’s really charting her own path.”