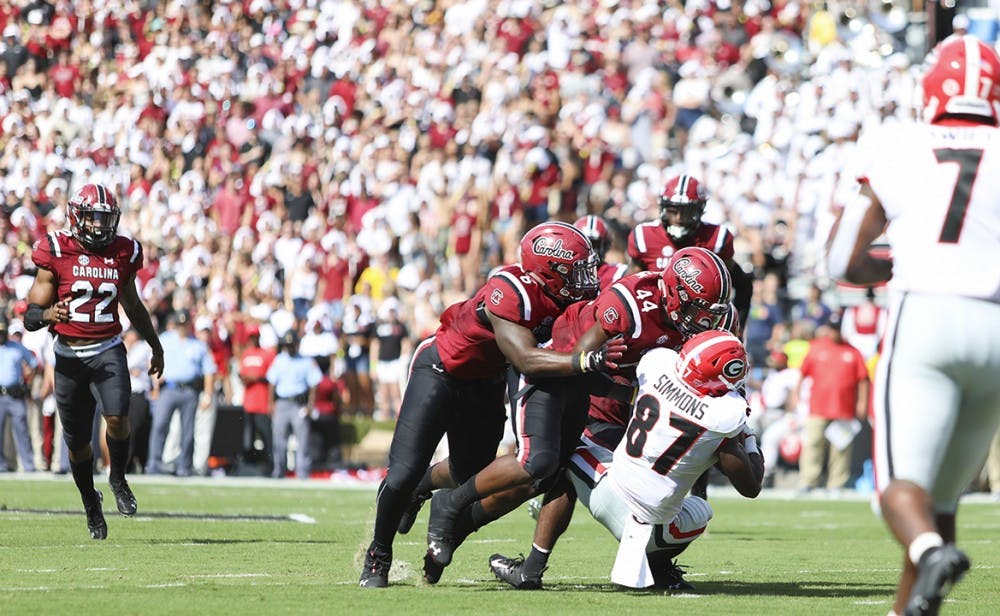 To the Dawg pound: 5 things to watch for in matchup against Georgia

The Gamecocks are coming off of a win over Kentucky last Saturday at home, but the Bulldogs pose a much bigger threat. Georgia is undefeated and No. 3 in the nation.

Head coach Will Muschamp knows just how talented this Georgia roster is.

"Coach Smart has done a fantastic job," Muschamp told Saturday Down South. "They recruit at a high level, they have a deep roster on both sides of the ball."

Here are a few things Gamecock fans should take into consideration before the game Oct. 12.

Both the Gamecocks and the Bulldogs have strong weapons in the backfield. Although it took time for South Carolina's running backs to gain momentum, a few key players have emerged.

Senior Rico Dowdle leads the Gamecocks with 56 carries for 370 rushing yards and four touchdowns. Dowdle is a versatile player, who also has plenty of receiving yards for South Carolina.

Closely trailing Dowdle is Clemson transfer Tavien Feaster, who has become a solid asset in the backfield. Feaster has 290 rushing yards for three touchdowns and zero fumbles on the season.

The two make up a strong duo for the Gamecock offense.

"I think we play off each other a lot," Feaster said in a press conference. "If we keep pushing each other, you know, we can push each other beyond the limitations that we think we have in the back of our mind."

Georgia's star running back, D'Andre Swift, has 49 carries for 388 rushing yards and three touchdowns this season.

South Carolina is home to three of the best pass rushers in the SEC.

Javon Kinlaw is No. 1 in the conference with four sacks. Following closely behind him in the rankings are Aaron Sterling and D.J. Wonnum. Both are tied for fourth in the SEC with three sacks each.

Georgia quarterback Jake Fromm clocks in at 6-foot-2 and 220 pounds, which will make it difficult to maintain composure in the pocket if his offensive line lets any of these pass rushers near him.

That might not be too much of a problem, though, as Fromm has some of the best help in the country. Georgia's offensive line has an average weight higher than the average in the NFL — Georgia has 328.6 pounds to the NFL's 314.8.

Junior left tackle Andrew Thomas is 6-foot-5 and 320 pounds, making him easily one of the biggest threats on the line. Alongside him are Justin Shaffer and Trey Hill, both sitting at 330 pounds.

The South Carolina defense has to step up and find a way to pressure Fromm during this crucial SEC matchup.

Gamecocks prepare during a bye week

South Carolina's game in Athens will only be its second away game of the season, but the team will be coming off a bye week.

Muschamp told The State he knows his offense needs to score more touchdowns if they want any chance at beating Georgia, and he is preparing them to do so.

The Gamecocks are also aiming to have issues with third down conversions worked out in the coming week.

Defensively, avoiding explosive plays will be pivotal. Although South Carolina is a leader in preventing long plays, Georgia has a strong offense that will push the limits of the Gamecock secondary.

Georgia senior kicker Rodrigo Blankenship is arguably the best kicker in the country this year.

He is eight-for-eight in field goal attempts so far, with his longest field goal at 50 yards. As far as PATs go, he made all 21 of them in Georgia's first four games.

Kirby Smart and Muschamp seem to have been through it all in the coaching world, but some might not know that they both started out as Georgia Bulldogs.

In 1994, Muschamp, a safety, went into his senior season and brought defensive back Smart right along with him. The two were teammates, but they never actually got to play together.

Later, Muschamp became the defensive coordinator at Valdosta State, where he and head coach Chris Hatcher hired Smart as the secondary coach soon after.

"We had a blast," Muschamp said. "You know, Kirby lived with Carol and I for about, I don't know, a couple months when he moved down there."

After leaving Valdosta State, the two met again on LSU's defensive coaching staff under Nick Saban, the head coach of the Tigers at the time.

Since then, Muschamp has gone 0-3 against Smart and the Bulldogs.

The Gamecocks will face the Georgia Bulldogs in Athens Oct. 12 at noon. The game will air on ESPN.