Aliyah Boston leads the Gamecocks to win over No. 4 Maryland 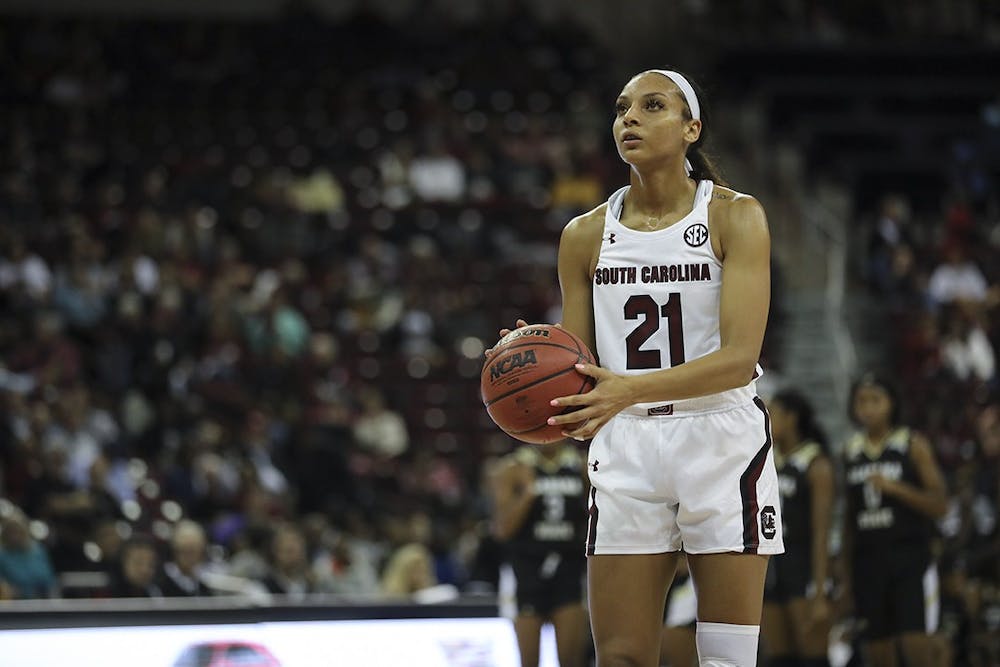 The No. 8 South Carolina women’s basketball team traveled to College Park, Maryland for its first road trip of the season to take on No. 4 Maryland (1-1) at the Xfinity Center in one of the most anticipated matchups of the year.

After cruising to a 103-43 victory over Alabama State last Tuesday, the Gamecocks (2-0) had an opportunity to move towards the top of the rankings with a victory over a top-five team.

In a game in which they were never trailing, the Gamecocks managed to take down Maryland by a score of 63-54. With the win, this snaps a five-game losing streak against teams ranked in the top five.

South Carolina jumped out to an early 10-2 lead in the first quarter as freshman center Aliyah Boston scored eight points (4-5 shooting). At the free-throw line, the team made six of its eight attempts, which accounted for one-third of its points in the quarter.

In the second quarter, Boston continued to make a major impact for her team as she made a continuous amount of big plays on the defensive side of the basketball. Down low in the paint, she made it look easy, blocking five Maryland shot attempts in the first half.

The Terrapins had a tough time gaining momentum against the South Carolina defense. They shot 31.4% from the field. However, guard Ashley Owusu kept her team in the game with nine points on 4-9 shooting and three rebounds.

The Gamecocks opened up the third quarter with an 8-0 run to go ahead by a game-high 14 points. Even though they were facing a double-digit deficit, Maryland fought back and was able to cut down the lead to eight points. The Maryland defense held South Carolina to one basket in the final five minutes of the period but could not take advantage as they were still down 46-38.

Kaila Charles began the fourth quarter with an and-one score in the opening minute to bring the Terrapins within six points of tying the game. In spite of Maryland’s late-game efforts, South Carolina responded with a 9-2 run to maintain a safe enough lead.

The final dagger came from senior guard Tyasha Harris, who knocked down a corner three-point shot with 1:07 left to play.

In the end, South Carolina was able to defeat Maryland in this top-10 matchup, 63-54.

After finishing with a triple-double in her first collegiate game, Aliyah Boston put together another spectacular performance as she scored 14 points, had seven rebounds and five blocks.

While Tyasha Harris went 3-14 shooting, she made the only 3-point shot of the afternoon for the Gamecocks, which solidified the victory. Harris finished with 13 points, six rebounds and four assists.

The third and final double-digit scorer for South Carolina was freshman guard Zia Cooke, who tallied 10 points, four rebounds and one assist.

The two-game road trip continues for South Carolina as they will take on Dayton (2-0) on Wednesday night at University of Dayton Arena. The Flyers are coming off of a victory against Toledo 60-42 last night. Tipoff begins at 7 p.m. and will be streamed on ESPN+.

This story will be updated with quotes as they become available.