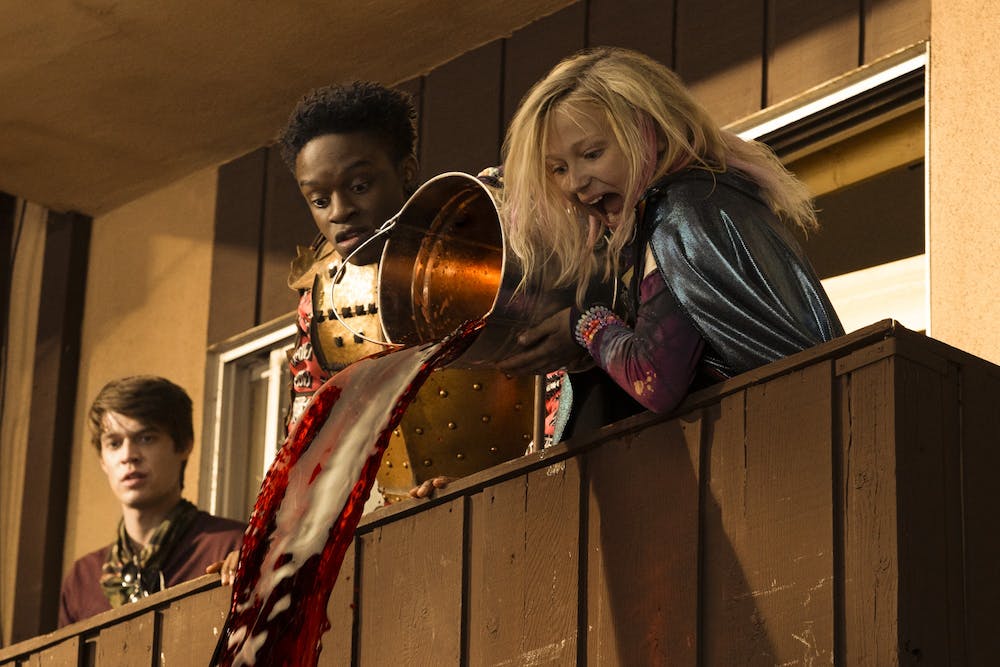 "Daybreak" follows a group of high school kids in the midst of an apocalypse. An explosion wiped out, presumably, the entire adult population and turned them into Ghoulies – zombie-esque creatures that feast off human flesh but appear less threatening because, as if broken records, they repeat the last thought they had prior to the explosion. The Ghoulies’ presence is mostly in the background; it seems as though the apocalypse is mostly based on high school itself.

The main characters, in retrospect, have about as much depth to them as the Ghoulies.

This was probably intentional, however. The show makes fun of itself continuously and is not meant to be taken seriously.

Josh (Colin Ford), who is referred to as “Just Josh” due to the presence of multiple Josh’s, can be described in those two words: Just Josh. Even though he is the main storyteller, his overall character is about as bland as unsalted Saltine crackers. His post-explosion purpose in life only revolves around finding Sam (Sophie Simnett), the most well-liked girl at his high school.

In hindsight, this does sound exactly like something a teenage boy would do.

Rather than joining a clan to survive the apocalypse with, he has devoted his energy, time and resources to looking for someone who could possibly be dead.

Just Josh’s redeeming feature comes in the form of the fourth wall, which he breaks down with his signature sword (which, of course, he named Sam). His interactions with the audience are an entertaining way to drive the story forward without having to go through the droning motions of serious storytelling.

One of the other main characters, Turbo (Cody Kearsley), also falls a little short in the personality department.

Turbo’s entire character arc essentially revolves around Wesley (Austin Crute), who is one of the members of Josh’s newly formed group. Turbo was a jock in his previous, pre-explosion life. In the midst of the apocalypse, he is, well, still a jock. A jock with an army. The only thing that adds to his character is his soft spot for Wesley. It would be different if Turbo had a change of heart throughout the season, but his loyalty only lies with Wesley, which stunts his progression as a character.

Even Eli (Gregory Kaysan), who was supposed to be a comic relieving nuisance, failed at being annoying.

Although the ending alluded to a second season, continuing the story would only unravel what the plot already accomplished. The open-ended questions could have easily been resolved with an extra five minutes added to the end of the finale.