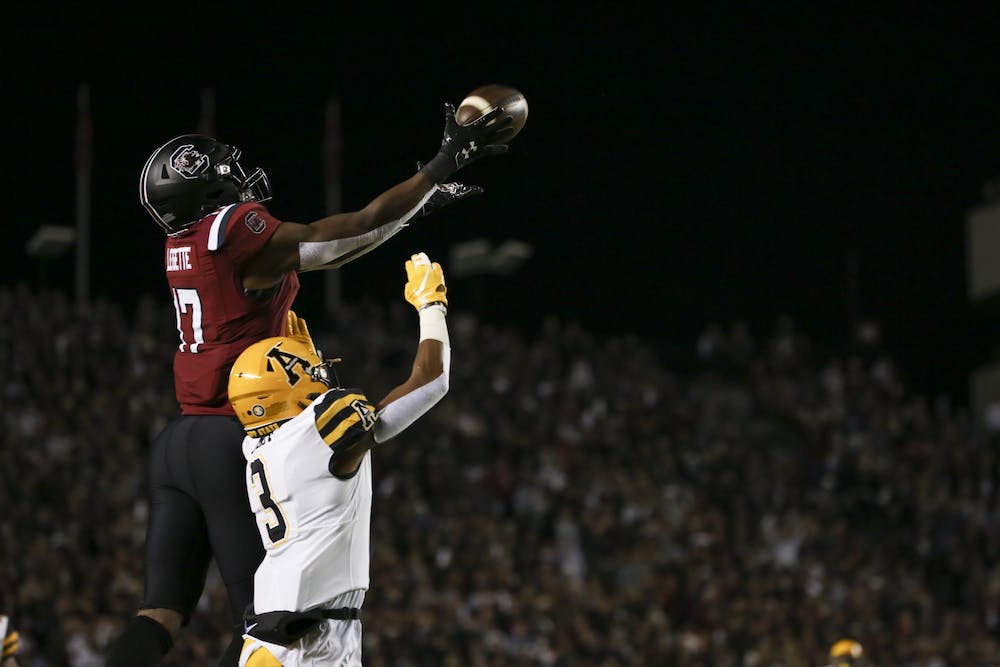 The South Carolina Gamecocks fell to the Appalachian State Mountaineers 20-15 on Saturday night at Williams-Brice Stadium.

On a chilly night in front of 80,849 fans, the Gamecocks were unable to get moving offensively and picked up the team's sixth loss of the season.

This makes winning against both Texas A&M and Clemson the only way for the Gamecocks to secure bowl-eligibility.

The Gamecocks and Mountaineers started off with very similar first drives, both converting a fourth down before finishing off their respective drives with a field goal.

Coming toward the end of the first half both teams were only able to scratch across another field goal each and it looked like the game would go into halftime with the score tied at 6.

This all changed when with under two minutes left in the first half when freshman quarterback Ryan Hilinski's pass ricocheted off of freshman wide receiver Xavier Legette's hands and into the hands of the Mountaineers' freshman defensive back Nicholas Ross.

Ross came up with the interception and returned it 20 yards to the end zone for a touchdown. This gave the Mountaineers a 13-6 lead heading into halftime.

While South Carolina had not ended the first half well, the beginning of the second half was a different story. Sophomore linebacker Ernest Jones intercepted Appalachian State junior quarterback Zac Thomas on the opening drive of the second half.

The Appalachian State defense stood strong and held the offense to a field goal. While it was a good start to the half, Thomas was able to answer with a touchdown drive.

The second half was much of the same offensively for the Gamecocks.

The team collectively rushed for 21 yards, with no player surpassing 14 yards. The group averaged 0.8 yards per rush.

Despite the teams struggles on the ground, senior running back Rico Dowdle said the group just has to “stay focused” and quit "shooting ourselves in the foot."

Hilinski ended the contest with 325 passing yards and an interception. He was able to spread the ball around, completing passes to nine different receivers.

Despite the teams offensive struggles, head coach Will Muschamp was happy with his quarterbacks performance saying he "threw the ball well."

The receiving core also struggled with drops throughout the night, making it difficult for the offense to move the ball effectively.

Muschamp addressed this issue by simply saying, “When it hits your hands we expect you to catch it.”

He also said that the offensive line got stalemated at the line of scrimmage by a smaller defensive line”  and did not give Hilinski much time in the pocket.

He was sacked three times and hurried on three more occasions. He was also stripped from behind, but fell on the ball to keep possession.

The Gamecock offense didn't get into the end zone until the last five minutes, when Hilinski found Edwards for a 23-yard touchdown.

That touchdown reception gave Edwards another South Carolina receiving record, this one being most career receiving yards.

Edwards now holds virtually all career receiving records for the South Carolina football program, but instead of worrying about these accolades, he said he is just concentrated on the "two games left on the table." Those being the upcoming contests against Texas A&M and Clemson.

Junior wide receiver Shi Smith and redshirt senior running back Tavien Feaster were also unable to suit up for the contest.

Senior wide receivers Bryan Edwards and Chavis Dawkins were both active but spent time in and out of the injury tent throughout the game.

On the defensive side of the ball, sophomore linebacker Ernest Jones had a career game, ending the contest with 10 total tackles, eight of which were solo. He also added a sack and an interception to that total.

Special teams played a huge role for the Gamecocks in this contest. Redshirt senior Joseph Charlton put on a punting clinic as usual and redshirt junior kicker Parker White set his career long field goal at 50 yards and made all three field goals he attempted.

While those players were able to shine on special teams, the kickoff return coverage was poor all game long. Appalachian State's return men averaged 39 yards per return. These efforts made it much easier for the Mountaineers offense to put up points.

The Gamecocks travel to College Station, Texas to face off against the Texas A&M Aggies on Nov. 16. Kickoff is schedule for 7:30 p.m. and can be viewed on the SEC Network.