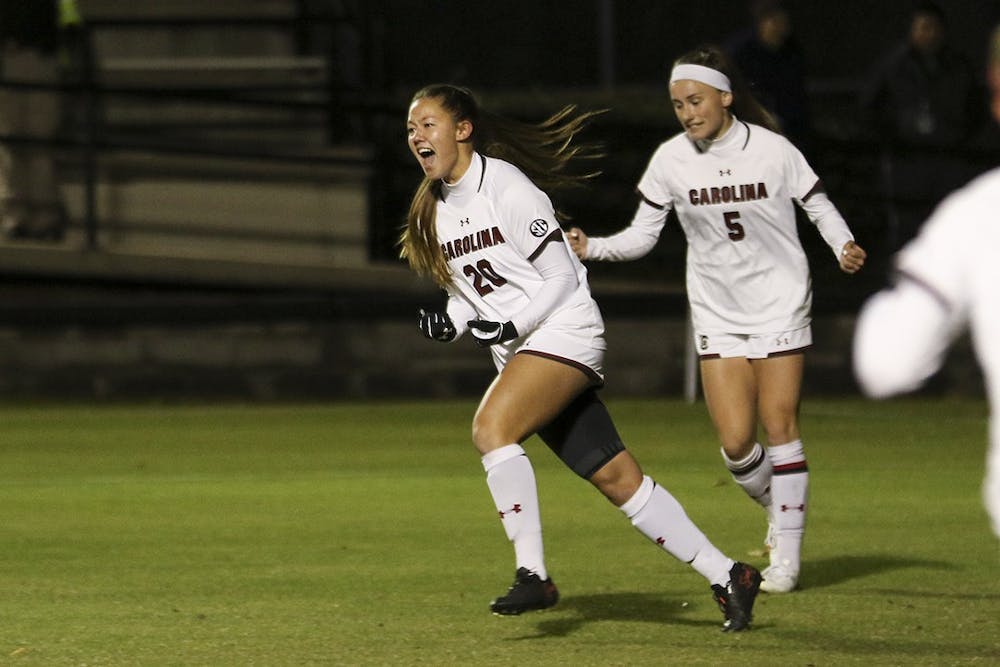 The Gamecock women's soccer team opened up NCAA tournament play by defeating the Samford Bulldogs 3-0 in its first round match at Stone Stadium Saturday night.

South Carolina came into the tournament hot after winning the 2019 SEC championship and posting a 16-1-3 record this season. The lone loss came against the No. 20 Clemson Tigers Sept. 15.

The Gamecocks received a second seed overall for this record, which gives them a home-field advantage for the first two rounds. Head coach Shelley Smith said the team hopes to capitalize on continued play in front of a home crowd.

"Stone Stadium is one of the best places you'll find in the country, I think, for college soccer," Smith said.

Samford also entered the contest with a championship under its belt, as the team secured the 2019 SoCon championship with a 1-0 victory over Furman, for a 13-3-5 record.

The first half was drawing to a close with neither team scoring, but junior midfielder Samantha Chang gave the Gamecocks a goal in the 41st minute. Sophomore forward Riley Tanner was credited with the assist.

Junior midfielder Lauren Chang said getting the goal before halftime was "immensely important."

The Gamecocks built on their halftime lead when junior forward Luciana Zullo rocketed a shot into the top right corner of the goal from over 20 yards out. This gave South Carolina a 2-0 lead in the 54th minute.

Tanner scored the last goal with less than 10 minutes left.

The Gamecocks came out of the gates quick in this game, controlling the entire first half. Despite only posting one goal, the team combined for nine shots in the first half. Four of those shots were on target.

This was in stark contrast to the Bulldogs, who did not register a shot in that half.

Despite giving up three goals, Samford's junior goalkeeper Morgan McAslen put up an impressive performance, recording four saves in the contest. The Gamecocks ended with 13 shots.

For comparison, the Gamecocks' Krzeczowski ended the night with two saves and a shutout. The Bulldogs only recorded three shots throughout the game.

"[The Gamecocks] may be the best defensive team in the country," Samford head coach Todd Yelton said.

The Gamecocks will face the winner of the Notre Dame versus St. Louis match, which is scheduled for 1 p.m. Nov. 17.