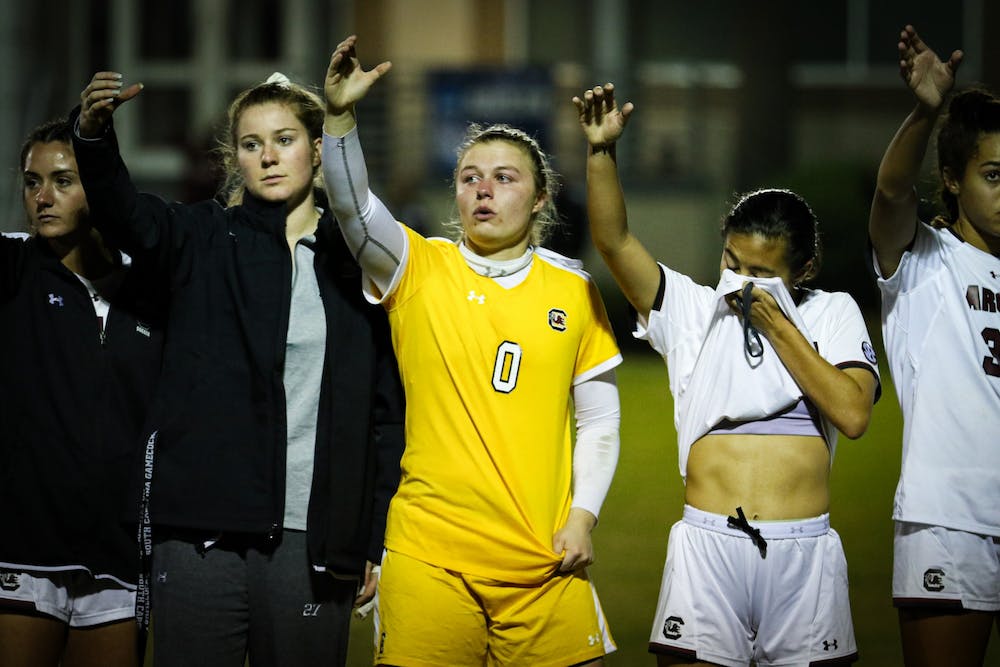 While the Gamecocks' came in as the favorite to advance, the Cougars, who “love being an underdog” according to Cougar graduate goalkeeper Ella Dederick, came out victorious.

The 90-minute regulation period ended with both teams scoreless, though both got close on multiple occasions. The Gamecocks' head coach Shelley Smith characterized the contest as "a battle."

The stage was set for extra time, and a packed Stone Stadium watched in anticipation of the score that would decide the game.

Five minutes into the extra time period, the Cougars were able to take advantage of a corner kick,and sophomore defender Mykiaa Minniss kicked the ball into the top right corner of the net, sending Washington State to the College Cup in San Jose, California.

Though regulation did not produce any goals, that was not from a lack of scoring opportunities.

In the sixth minute of the game, Washington State's graduate midfielder Averie Collins missed a shot.

The Cougars blew another scoring opportunity in the first half when senior forward Morgan Weaver had a one-on-one chance against senior Gamecock goalie Mikayla Krzeczowski and sent her shot over the crossbar.

Krzeczowski came away with three saves on the night.

The Gamecocks were in position to put themselves on the board, making up six shots in the first half. They were unable to break through and put one in the back of the goal.

Gamecock junior forward Luciana Zullo had a chance to win the game early in the extra time period, but Dederick saved it.

Though the game was physical, the referees stayed out of it for the most part.

The Gamecocks ended the contest with three fouls, and the Cougars finished with eight.

The fans in attendance seemed to believe this was too few fouls called against the Cougars. Boos rained down multiple times throughout the game, and the crowd made sure the referees knew exactly how they felt.

Smith said there “could’ve been some calls made,” but this is something the team has to "play through."

The Cougars' junior defender Brianna Alger and junior forward Makamae Gomera-Stevens each picked up a yellow card during the contest.

The Gamecocks' season is over, finishing the year with a record of 19-2-3, an SEC championship and an Elite Eight appearance.

Smith said she “couldn’t be more proud" of the team.

Junior midfielder Lauren Chang said she hopes to "lead by example" next season and lead the Gamecocks to another successful season.

Washington State will continue on to San Jose, California, making its school's first-ever appearance in the College Cup. They will play their semifinal match against the North Carolina Tar Heels Dec. 6 at 4 p.m. PST.