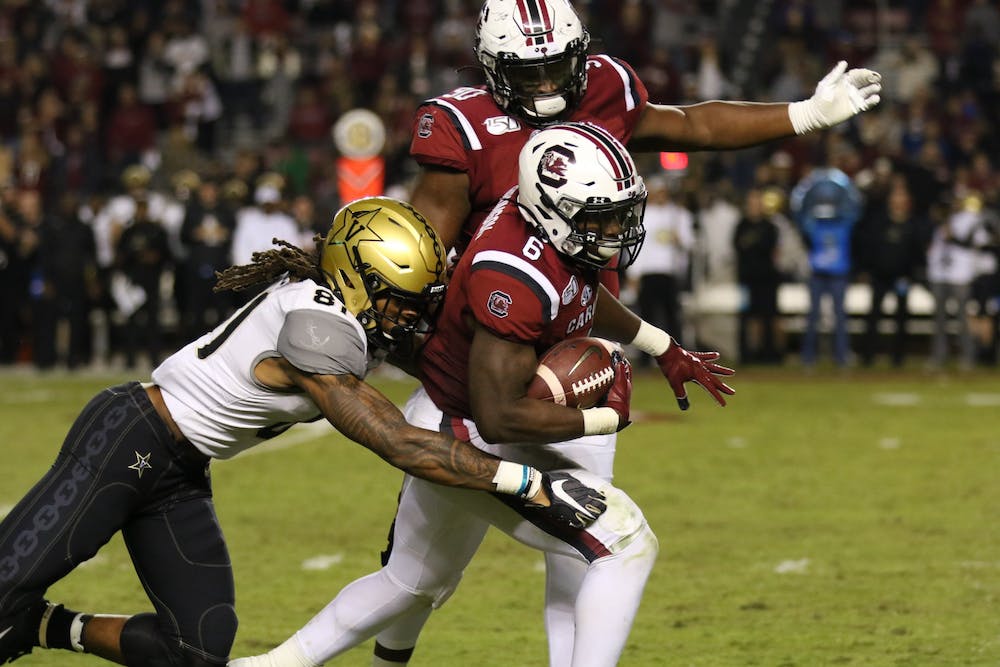 As the game began, South Carolina's offense and defense had equally slow starts. The Gamecocks' defense gave up enough yards from holding calls to allow Vanderbilt to move down the field and score off a 26-yard pass to wide receiver Cam Johnson.

Vanderbilt continued to keep the ball on offense for the remainder of the first quarter, after the Commodores were able to force and recover a fumble off Gamecock running back Mon Denson's three-yard run.

As the second quarter started, neither team made progress downfield.

The Gamecock defense ran with this newfound momentum and caused Vanderbilt to go three and out, with Gamecock defensive back Jaycee Horn breaking up a third-down pass.

South Carolina took the lead with under two minutes left in the half, as running back Kevin Harris ran for a one-yard touchdown. The Gamecocks' defense held Vanderbilt to its second third and out, and South Carolina went into halftime leading by a touchdown.

Vanderbilt received the ball to start and the Commodores come out with an 18-yard competition to wide receiver C.J. Bolar. Vanderbilt's momentum ended when Gamecock linebacker Ernest Jones rushed quarterback Deuce Wallace and stopped Vanderbilt from converting on third down.

South Carolina saw a handful of offensive penalties. After all of the penalties, a fourth & 25 was brought up for South Carolina, forcing the Gamecocks to punt with just under six minutes left in the third quarter.

After three unproductive offensive plays, South Carolina was unable to convert on fourth down and had to give the ball back to the Commodores.

South Carolina defense saved their offense for the second time in the third quarter, as defensive back R.J. Roderick came up with an interception. The Gamecocks took over on Vanderbilt's 29 yard line and were able to get an 11-yard rush from running back Tavien Feaster before the third quarter finished.

As the fourth quarter began, South Carolina was able to put points on the board, as Parker White made a 22-yard field goal. Later in the quarter, Hilinski completed a 25-yard touchdown pass to Edwards.

"[Edwards'] effort and competitive attitude, he competes every down like it's his last down, that's what I've seen. But I've seen that for four years now," head coach Will Muschamp said addressing Edward's performance. "We're certainly going to miss him, but he's going to go down as one of the Gamecock greats of all time."

After the touchdown, Vanderbilt didn't get a chance to do anything on offense, as linebacker T.J. Brunson came up with an interception for the Gamecocks and put them on the 18-yard line.

Vanderbilt defense stepped up on fourth down to stop the Gamecocks from scoring after being on the two-yard line, but the Commodores offense was unable to get anything done as the fourth quarter came to an end.

Since South Carolina lost running back Rico Dowdle against Florida two weeks ago, Feaster and Denson have produced the run game South Carolina has been looking for. However, it was redshirt freshman Fenwick who stepped up against the Commodores.

Fenwick averaged 6.6 yards per carry and had only one career touchdown for the Gamecocks in the 2018 season. After the first half against Vanderbilt, Fenwick led South Carolina's rushing yards with 42. That exactly doubled the 21 yards Feaster had in the first half.

Muschamp said, given the amount of running backs ahead of him in the lineup, Fenwick was discouraged going into the 2019 season.

"He stuck it out, and I pulled him up in front of the whole team and I told the whole team that. It's a great example of a guy who just kinda sticks around, continues to work and when his number's called, he plays well," Muschamp said.

The third-quarter interception by Roderick was an important moment for South Carolina, as the interception led to White making a 22-yard field goal.

Offensively, the Gamecocks were struggling with productivity and penalties in the third quarter, but since South Carolina's defense was able to keep Vanderbilt from scoring, the Gamecocks kept the lead.

"The season hasn't gone the way we have wanted it to, and I can't thank our fans enough. They're unbelievable. The players appreciate it, I appreciate it; you know, it's the best I've ever been, anywhere I've ever been as far as the support and passion that they have for us. The support for us, making a difference on game day, and it's absolutely amazing. We need it again next week, it's senior night," Muschamp said. "We need to support them and send them out the right way."

South Carolina will be back in Williams-Brice Saturday Nov. 9 to play Appalachian State. Kickoff is 7 p.m. and available on ESPN2. The Mountaineers are 7-1 for the season and coming off their only loss of the season to Georgia Southern.