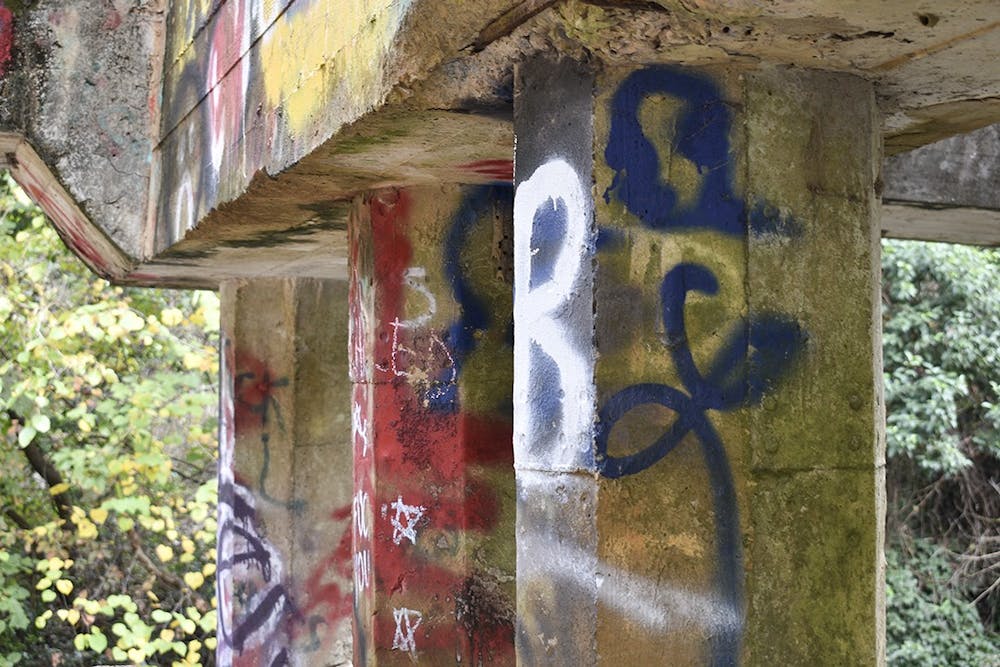 If the average college kid were to ask their grandma’s opinion about a local piece of graffiti, chances are high that she would react negatively. She might say something about graffiti’s illegality or defacing of skillful architecture. She might also say something concerning its negative reflection on local law enforcement or the socio-economic standing of the city.

It is undeniable that graffiti certainly has founded many disagreements, but opposition lies in the nature of the perpetrator.

This is not the case for all grandmothers, but according to a CBS News poll, it is certainly typical of the 65 years and older age group. There has been an established correlation between impoverished cities and graffiti. Not to mention, it is illegal and is commonly related to gang activity. The discussion on graffiti has been an ongoing problem since its origin.

Although it is true graffiti is a tell-tale sign of a troubled city, the nature of graffiti is rooted in class unease as peoples lives are affected at the hands of their government.

Take Athens, Greece, for example. The city is drowning in graffiti, a massive point of contention for its people. On one hand, the epidemic of graffiti has resulted in historic and valuable monuments being frequently vandalized and virtually destroyed. As true as this is, the graffiti is born from the failing Greek government's prioritization of its tourist industry, while the Greek people are suffering in one of the worst economies in the world.

When not simply an act of vandalism, graffiti has historically existed as a form of expression for a struggling or underrepresented populace to speak its message. This form of expression communicates the struggles faced by society's members to a passive government.

Graffiti has provided the chance for oppressed members of society to fight for themselves in ways otherwise unavailable to them. There is also a perpetuating, cyclical nature to graffiti.

Government whitewashing, or a government's response and a form of oppression, has typically grown the world of graffiti through the painter’s reactionary desire to combat their silencing. Various forms of innovation and increased acts of graffiti spawn as the direct result of trying to end graffiti.

Today, the debate for graffiti being viewed as an art form instead of solely being a form of vandalism and the propagation of criminal activity is ongoing, but the dynamic is changing. No matter one’s stance, the world of graffiti is growing and developing into a completely new subculture of city life and art.

The fusing of famously capable artists, such as Os Gemelos, the infamous Banksy or Shepard Fairey, with the extreme contemporary wealth of art collectors has popularized graffiti into a subculture of street art. Graffiti has grown out of its origins in anarchist and rebellious sentiment into an acknowledged art form and means of societal expression.

Many people know artists such as Banksy from his “Better Out Than In” period, when he lived in New York for a month, but ultimately created an impactful city-wide art exhibit. Besides creating a name for Bansky, this type of work has changed the art industry with its wit and competency. The top selling piece from this enigma auctioned at $12,142,893. From selling pieces for $60 to having citizens steal his artwork to turn profit, the month held many seemingly sociological findings and inevitably changed the world, and graffiti culture, even further.

As of October 2019, Banksy has opened a website that holds every aspect of his typical societal agitator expression. He is selling pieces of art, all which hold the potential to be worth thousands or millions of dollars, for prices that the general population can afford. All of this is in support of the artist's world, and is rooted in the want to create a trade-space for artists to sell their works out of the hands of the exorbitantly wealthy.

Even with the massive amount of wealth and the growing appreciation for what is nowadays considered “street art,” the controversial stigma of graffiti’s expression still holds prevalence in many places. These artists are still regularly forced to submit to external influences, while their art and messages are censored by management and the money of buyers. Art as an institution should exist separately from corporate greed and control.