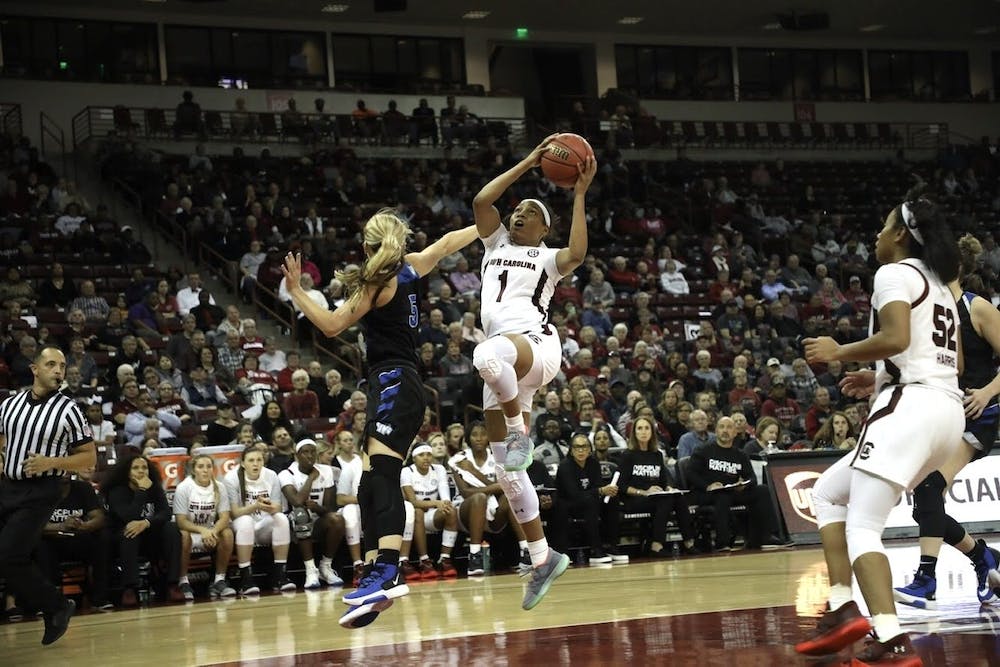 The University of North Georgia Nighthawks traveled to Columbia Friday night to face the South Carolina Gamecocks for the first and only exhibition game of the 2019-20 women’s basketball season where the Gamecocks beat the Nighthawks 112-48.

Freshman Aliyah Boston won the tip for the Gamecocks, and Boston and the team never looked back. Dawn Staley mixed youth and experience into the starting lineup against the Nighthawks. Staley started two freshmen, Boston and Zia Cooke, sophomore Destanni Henderson and two seniors, Tyasha Harris and Mikiah Herbert Harrigan.

North Georgia never gained momentum on either side of the ball, only scoring eight points in the first quarter compared to the 26 that South Carolina scored.

Cooke led South Carolina in scoring with a 18 points on 7-for-15 from the field. Junior LeLe Grissett went 7-for-8 from the field scoring 16 points.

The Nighthawks went 9-for-28 from behind the three-point line with junior Kara Groover being the main producer going 3-for-6. Groover was also the team's leading scorer, and the only one to score above 10 points.

Unlike North Georgia, South Carolina was unable to shoot the three-ball as well as the Nighthawks. The Gamecocks were only 2-for-12 from behind the arc, with one three-point shot coming from freshman Brea Beal, and the other coming from Grissett.

Coach Staley, on the other hand, said she believed the team has "a lot to work on, from a defensive standpoint, we had a lot of breakdowns, just little detail things that we must clean up. We had bad closeouts, so I mean we're a work in progress."

Staley also said, "I like the fact that we have a whole lot of potential with the players that we have out there on the floor, and we certainly saw some bright spots."

The Gamecocks open up the regular season at Colonial Life Arena on Nov. 5th at 7 p.m. against Alabama State. The game can be viewed on SEC Network.