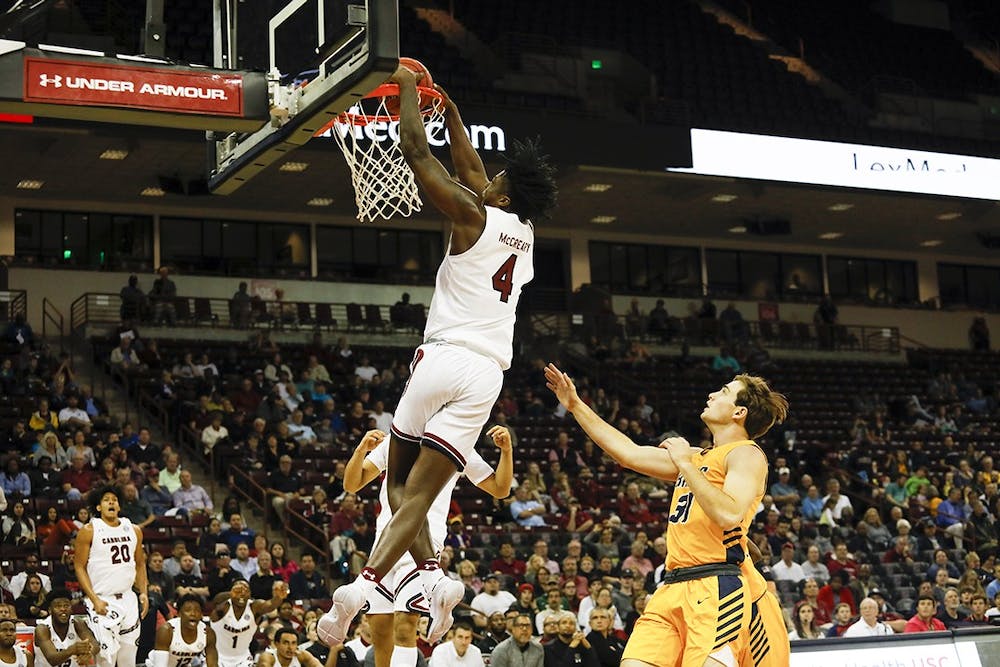 The Gamecock men's basketball team kicked its season off Wednesday night at Colonial Life Arena with an exhibition against the Columbia International Rams. The Gamecocks showed their potential, starting the year with an 87-50 win.

Last season, the Gamecocks fell short of any postseason aspirations, failing to secure a National Invitation Tournament bid for the second consecutive year.

With Frank Martin at the helm for his eighth season as head coach at USC, his young Gamecock team is primed to take the next step in 2019.

Part of the Gamecocks' youth stems from roster turnover, as key starters Chris Silva and Hassani Gravett moved on to the NBA following their senior seasons.

With two of the feature faces of the Martin-led Gamecocks moved on, sophomore AJ Lawson leads the way in the starting rotation this season.

Lawson is coming off a freshman all-SEC season, in which he appeared in 28 out of 29 games. Lawson, a lanky 6-foot-6-inch guard, averaged 13.4 points per game last season. His athleticism is what draws the most attention, as he excels at perimeter defense and driving to the basket.

Lawson displayed his ability to pass the ball Wednesday night as he dished out seven assists.

Lawson averaged 2.9 assists per game last season. Improvement in his passing game is something to watch for this season.

"That was my biggest challenge with [Lawson] coming into this year," Martin said. "Let's get your assists up, your turnovers down."

Unfortunately for the Gamecocks, the only other player who could match Lawson's athleticism is sidelined for the foreseeable future.

Frank Martin told reporters after Wednesday's game that sophomore Keyshawn Bryant will be out indefinitely with a knee injury.

"The healing part is the part we don't control," Martin said.

There has been plenty Martin and the Gamecocks haven't been able to control. Recent seasons have been plagued by a wave of early injuries.

What they can control is preparation for their tough slate of games, both in and out of conference.

Last season, the Gamecocks came out of the gates slowly. In non-conference games, they posted a 5-9 record.

This year's non-conference schedule is highlighted by four matchups against teams in the top-100 of ESPN's college basketball power index, including a game with the defending national champions, the Virginia Cavaliers.

Where South Carolina really hit its stride last year was in conference play. Despite its sub-par overall record, the Gamecocks entered the SEC tournament as the No. 4 seed with an 11-7 conference record.

According to the experts, the Gamecocks will be punching upwards for the majority of their SEC schedule. South Carolina was voted to finish at No. 10 in the conference in the media-voted preseason poll.

The Gamecocks weren't handed many favors with their schedule, and the toughest SEC stretch comes in mid-January. South Carolina will face Florida, Tennessee and Kentucky, in that order. It will be a great test of the young Gamecocks' ability to match tough teams early on in conference play.

The Gamecocks will officially open their season at home Wednesday, Nov. 6 when they host North Alabama at 7 p.m.