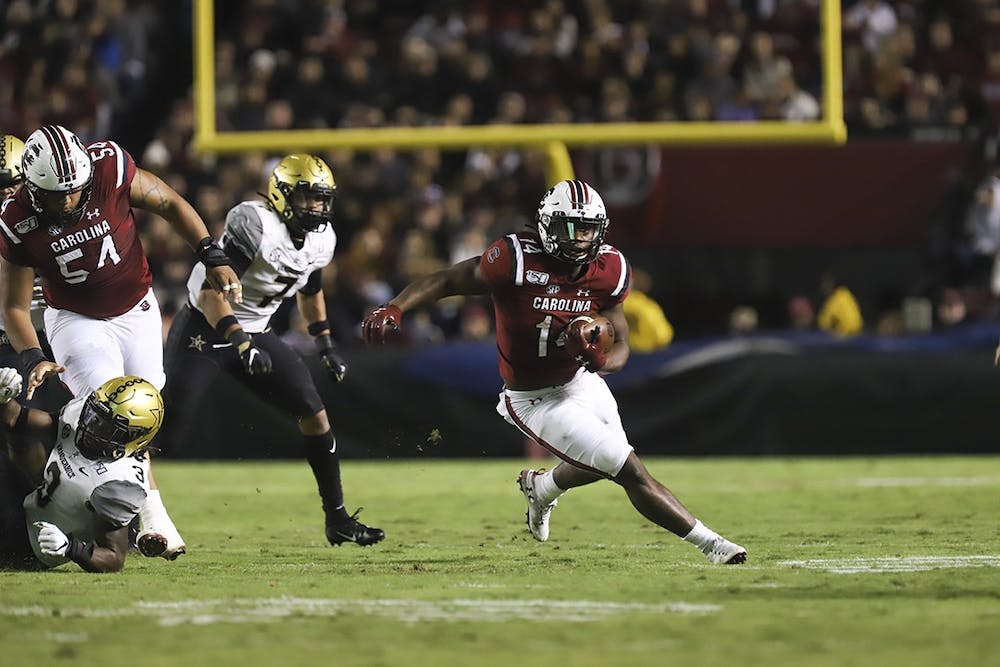 The South Carolina Gamecocks played against the Vanderbilt Commodores for their 2019 homecoming game. In a weekend filled with tradition and history, the Gamecocks had quite a few new faces make an impact on the offensive side of the ball.

Redshirt freshman running back Deshaun Fenwick entered the game not having a single carry on the season. He had only appeared in two games in his collegiate career, carrying the ball 21 times for 115 yards and a singular touchdown.

Senior running back Rico Dowdle was inactive, still dealing with a knee injury that happened in the Florida game. Redshirt senior Tavien Feaster was also in and out of the injury tent all night due to a groin injury.

While Feaster was able to put up 53 yards, he was only able to run the ball 11 times, leaving an opportunity for some different running backs to get some carries.

Teammates were ecstatic for the running back.

Redshirt freshman quarterback Dakereon Joyner described him as “a guy that works hard and he truly deserves it,”  and sophomore linebacker Ernest Jones said his success was “phenomenal to see.”

Muschamp said postgame that Fenwick had discussed transferring from the program early in the season, but he convinced the running back to "stick it out" and said he was a "great example of a guy that just actually handled adversity."

When asked about his role moving forward, Fenwick said, “If my number's called, it’s called,” and he would  “continue to work hard.”

Another true freshman, wide receiver Xavier Legette came into the contest sporting a career statline of one catch for four yards.

Legette was able to make a meaningful contribution in this game, going for 34 yards on three receptions and a touchdown.

In a game where senior wide receiver Bryan Edwards set a career high number of receptions at 14 and accounted for over 50 percent of freshman quarterback Ryan Hilinski's completions, Legette provided Gamecock fans with some hope for the future.

The Gamecocks, additionally, were without junior wide receiver Shi Smith, who was sidelined with a concussion.

Sophomore wide receiver Josh Vann suffered a broken hand in the game, and tight end Nick Muse had a knee injury. With these playmakers possibly missing significant time, Legette has a chance to take over some of that production.

The Gamecocks have struggled to find someone other than Edwards or Smith to consistently make plays at wide receiver.

If Legette is able to insert himself into the rotation and continue to make an impact, he could have a big future in Columbia, especially with this being Edwards' last season as a Gamecock.

“Big things coming for [Legette] in the future,” Edwards said.

Hilinski is clearly the future of the Gamecocks offensively, but he needs weapons to be successful. The performances of both Fenwick and Legette give reason to believe they can develop into such weapons.

Only time will tell if these young talents will become the Gamecocks' next offensive stars, but these performances definitely make them intriguing players to watch during their tenure at South Carolina.