The girl behind the baton: Sabrina Smith lights up Williams-Brice as South Carolina feature twirler 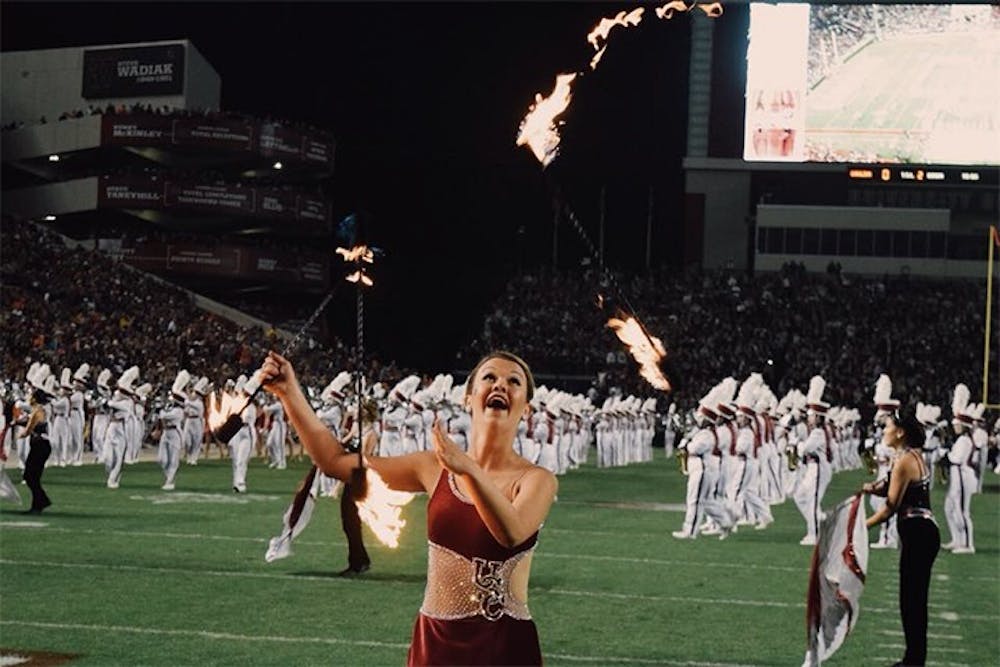 Don't play with fire — every child has heard it before. But for nationally competing baton twirler Sabrina Smith, playing with fire has become her job.

When the Carolina Band, also known as the Mighty Sound of the Southeast, performs at each home game, Smith is always alongside them with a huge smile on her face and a baton in her hand.

"My mom twirled and so did my aunt," Smith said. "When I was born, they already had a team together that they were coaching, so I was pretty much born right into it."

Three years later, when Smith was 5 years old, she began competing. She competes in local, state, national and world competitions throughout the year. She has competed in France, Canada, Croatia and Switzerland.

"It doesn't come easy to people," Smith said. "You really have to work at it. It's like any other sport, where it challenges you and you have to put time and dedication into it, and it ends up looking effortless."

This summer, Smith had the opportunity to compete in the National Baton Twirling Association's national competition. There, she won the title of College Miss Majorette of America, one of the most prestigious titles a twirler can hold.

"As College Miss Majorette of America, I have the opportunity to travel around the country and perform at numerous competitions and different camps as a title-holder," Smith said.

Fans are often mesmerized by Smith's ability to twirl fire batons. During each performance, the student section erupts into cheers and applause.

Smith began twirling with fire when she was a freshman at South Carolina.

"It's not a big competitive aspect of twirling," Smith said. "It's very nerve wracking ... but it's a really exciting atmosphere and I just, really, I love performing."

Smith said she loves that she has had so many new opportunities as a feature twirler at South Carolina. Earlier this year, she competed with Gamecock cheerleaders in the game day event at the National Cheer Association's competition.

For Smith, there is something special about performing in Williams-Brice Stadium.

"The whole experience has been a dream come true for me," Smith said. "I really love my band family and twirling under the directors that we have right now."

After her graduation in December, Smith will retire as a competitive baton twirler.

"This was the one thing that I have worked since I was 5 years old to win," Smith said. "My sister and I used to pretend to crown each other ... at our house. It was just something that was really special to me and this title means a lot to me, so I think I wanna end on this."

Smith said she hopes to judge baton twirling some day. She also plans to serve as a teacher and mentor for baton twirlers at camps and contests.