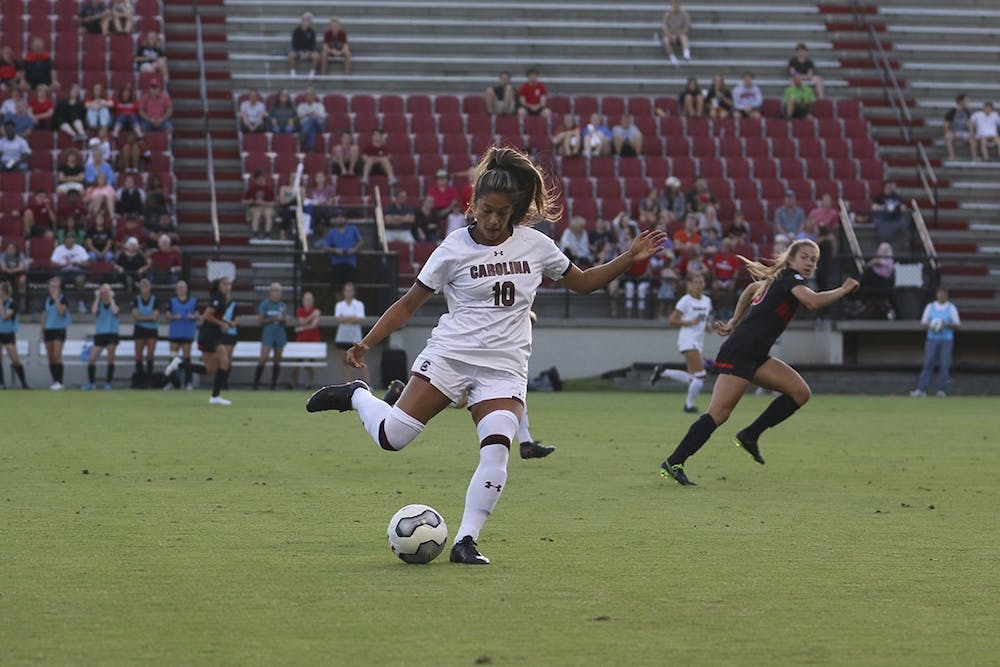 The South Carolina women's soccer team looks to have another strong showing in the NCAA tournament as it tries to make it to its second College Cup in three years and its first since 2017.

After defeating Arkansas Sunday to win the SEC championship, the Gamecocks' resume was boosted significantly, especially considering the team did not lose an SEC game all season.

Sixty-four teams will compete for the opportunity to make it to the 2019 Women’s College Cup as the 2019 NCAA Division I women’s soccer regular season ends and conference tournaments wrap up. The full tournament field and seeding will be revealed Monday, Nov. 11 at the selection show.

South Carolina finished the regular season ranked No. 7 in the country and seems primed for a high seed in the NCAA tournament.

The Gamecocks will have to rely on their impact players who have been putting in work for head coach Shelley Smith all season to earn their way into the tournament and have an opportunity for a run at the championship. Three players that will have to show up every game for South Carolina to survive and advance are Mikayla Krzeczowski, Elexa Bahr and Lauren Chang.

This trio of Gamecock upperclassmen have played in all 20 of South Carolina’s games this season and are a big part of the team’s success so far.

“The experience is invaluable," Smith said about the expansive amount of games that her mature team has experienced as a group.

Krzeczowski is the anchor for a South Carolina team that has only allowed two goals all season, which is .37 per contest. As her final season with the team nears its end, the goalkeeper will do everything in her power to add to her school record career of 47 clean sheets. Krzeczowski will have to continue a historically impressive career to give the Gamecocks a fighting chance to win it all.

With a program legend in goal anchoring the defense, it allows the offense to take over in many of South Carolina’s games. Junior midfielder Chang and senior forward Bahr are the engine that drives the goal-scoring machine that is the South Carolina Gamecocks.

Bahr leads the team this season in goals and assists, and Gamecock fans hope to see much of the same continue in the postseason.

“We’re definitely going to go in there with the right mindset,” Krzeczowski said. "We definitely want that title, so we’re gonna fight for it.”

South Carolina will await its selection for the NCAA Tournament, as the selection show is set to begin at 4:30 p.m. on Monday and will be streamed on NCAA.com.

Fans are encouraged to join the team Monday at 3:45 p.m. for the selection show watch party on the front lawn of the Soccer Ops Building at 115 Marion Street in Columbia. The event is free and open to all fans interested in joining the team to watch the live broadcast of the selection show. Free pizza will be provided to the first 50 fans.