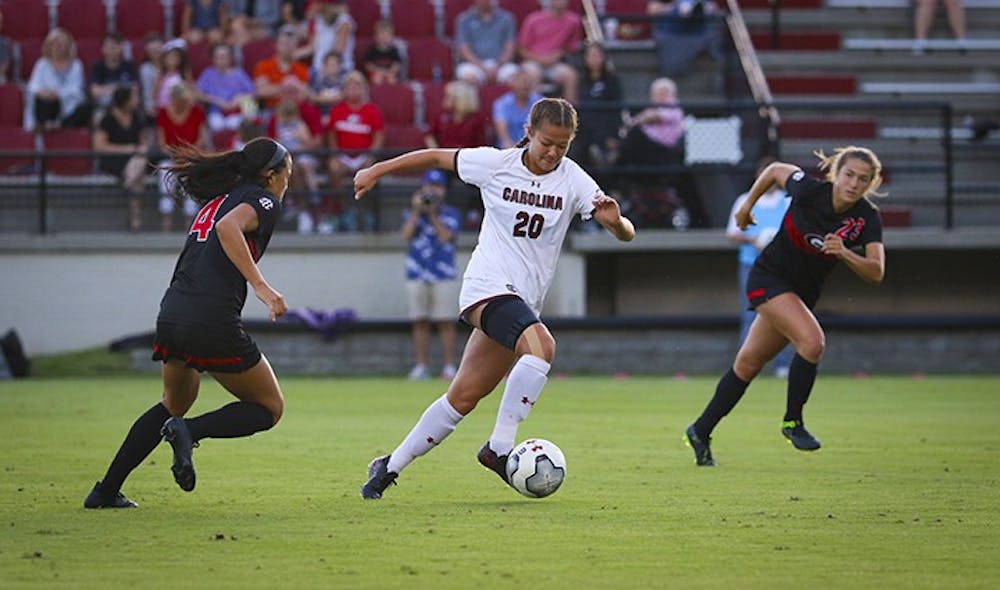 South Carolina women’s soccer advanced to the semifinals of the SEC tournament after a 1-0 victory over No. 6 seed Georgia. The Gamecocks came out on top in a close game to notch their second win of the year against the Bulldogs.

Rebecca Koch scored the difference-maker for the Gamecocks in the 51st minute, which was her first of the year. Luciana Zullo centered the ball and Koch sent it into the top right of the net just over the outstretched arms of goalkeeper Emory Wegener. The assist was Zullo’s fourth of the season.

Georgia came out of the gates early with a lot of energy and had South Carolina on its heels, but the teams went into the half without a score on the board, tied at zero.

The Gamecocks came out of halftime with more intensity and put more pressure on the Georgia defense with eight of their 10 shots in the second half.

The Gamecocks finished with a 6-2 advantage in shots on goal. The team also increased the intensity on the defensive side of the ball, recording six fouls as opposed to Georgia’s three.

South Carolina goalkeeper Mikayla Krzeczowski recorded another shutout, moving her to 45 in her career. She recorded one save in the game, her 36th of the year.

The No. 3 seed Gamecocks now look forward to a matchup against No. 2 seed Vanderbilt in the semifinals of the SEC tournament. The game is Thursday at 7 p.m. and will be a rematch between two SEC East foes who tied 0-0 earlier this season at Stone Stadium.

If the Gamecocks win the semifinal game, they will advance to the SEC championship game for the first time since 2010 and have a chance to win only the second SEC championship in school history. However, the key for the Gamecocks will be focusing on Vanderbilt and continuing to rely on strong defense and swift counterattacks that powered them all season.