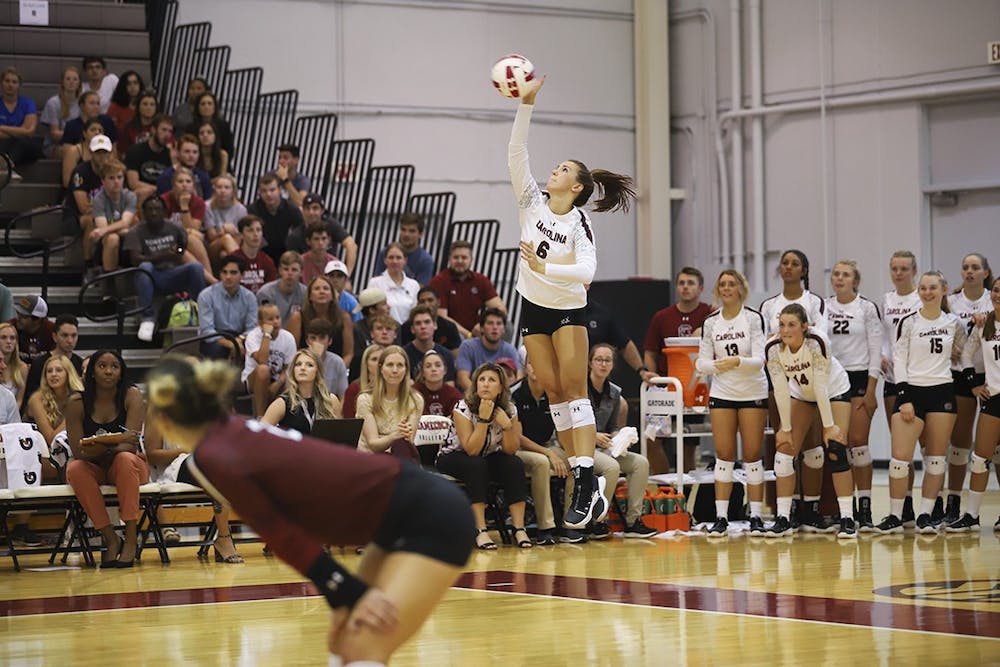 South Carolina volleyball is heading to the NCAA Tournament for the second year in a row. They received a bid in the No. 8 seeded Washington regional and will play Colorado State in Seattle in the first round on Friday at 8 p.m.

The team also wrapped up its 2019 regular season this week. Here is a look into what happened.

Under second-year coach Tom Mendoza, the Gamecocks finished their season with an overall record of 19-11, conference record of 11-7 and a 10-3 record at home.

Seniors this year included middle blocker Claire Edwards, defensive specialist Addie Bryant, setter Courtney Koehler, right side Mikayla Shields and outsider hitters Brittany McLean and Alicia Starr. Throughout the season it was the seniors who combined for 58% of the team’s kills, 78% of team assists and 75% of team aces.

Edwards had a career-high season this year. Her average points per set were 2.41 and her hitting percentage was .315. Another success of Edward's senior season was her 17 aces and 97 blocks.

The Gamecocks opened their season with the Panther Challenge in Pittsburgh, Pennsylvania, and the UCF Challenge in Orlando, Florida.

After those two tournaments, the team was 3-3 and traveled back to Columbia to host UNC-Charlotte in the first home match.

Despite the slow start in the tournaments, the Gamecocks swept the 49ers at home in front of 1,721 fans.

One of the most exciting games of the season for the Gamecocks was their second season game against Cleveland State in the Panther Challenge. After coming off a season-opening loss to Cincinnati the day before, South Carolina rallied to claim its first win of the season the following day.

The Gamecocks had to overcome a 2-1 set deficit against the Vikings, and that comeback was aided by junior Jess Vastine who had a double-double with 16 digs and 16 kills, and senior Shields who had 17 kills for the night.

Season as a whole

The overall season had a lot of highs, including 12 sweeps.

The Gamecocks proved to perform under pressure after winning five out of six five-set-matches, only losing to Georgia 2-3 midway through the season.

It was the leadership of the team's six seniors that helped the Gamecocks achieve a 19-11 season record.

Also aiding South Carolina's winning record this season were juniors Jess Vastine and Mikayla Robinson. When South Carolina wins, the two of them are performing highly in aces, kills and blocks.

Looking ahead to the postseason

“I think it was a stepping stone for this program,” Edwards said about the postseason bid last season. “You know, now we have a higher standard for ourself and expectations, and we expect to continue that from years on, even after the seniors graduate.”