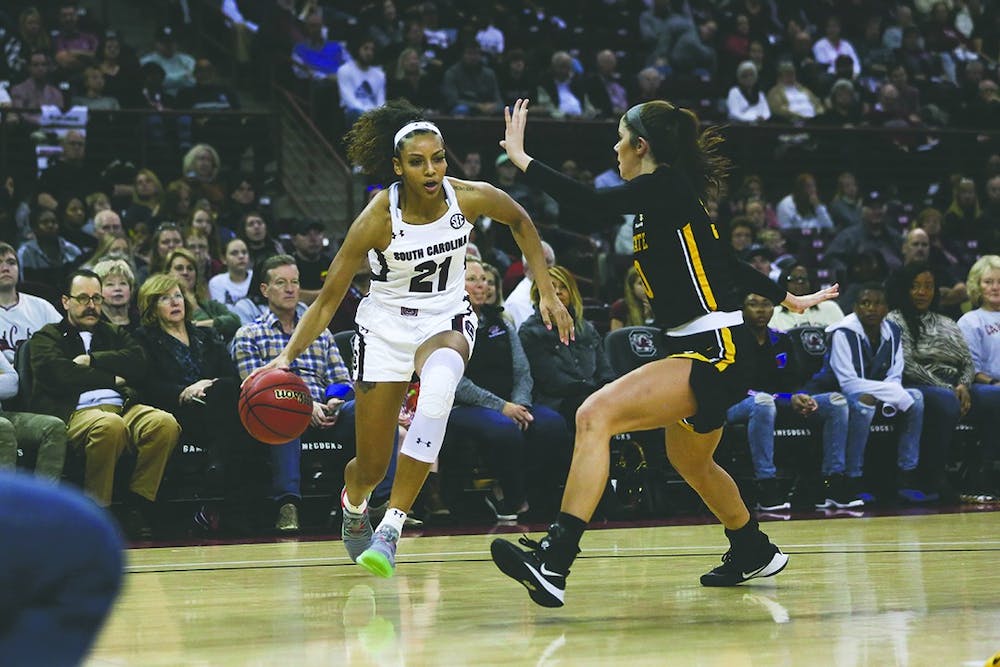 Gamecock women's basketball seeks to live up to expectations

The 2019-2020 women's basketball season began Nov. 1, when the Gamecocks defeated the North Georgia Nighthawks 112-48 in South Carolina's only exhibition game of the season.

Last season, the Gamecocks finished in the Sweet 16 with a loss to Baylor, ending the season with a 23-10 record. Soon after, head coach Dawn Staley and the team lost seven players, four to graduation and three to the transfer portal.

Since then, Herbert Harrigan has not only served as a leader for the team, but she is stepping up on the court stats-wise, living up to her preseason all-SEC second-team nod. Through the team's first six games, she is second in scoring on the team, averaging 13 points per game and shooting 51.7% from the field. She is second on the team in single game scoring, with an early season high of 21 points in the Gamecocks' 92-50 win over Appalachian State.

No. 3 recruit Aliyah Boston was named to the Lisa Leslie Award Watch List, an award given to the top female collegiate center, during the preseason.

In Boston’s first game, she totaled a triple-double, becoming the first freshman in school history and seventh Gamecock all-time to do so. Boston is currently first in the nation in total blocked shots, with 24 through the first six games, and first on the team in scoring.

Zia Cooke and Brea Beal were the other two top recruits that accompanied Boston in the 2019 recruiting class. Cooke is third in the team's points per game list, averaging 12.5 points per game, and leads the team in single game scoring with a 27-point outing versus Dayton.

Beal didn’t start in the exhibition game, but Staley put her in the starting lineup for the first regular season game and she has remained there so far. Beal is averaging 6.7 points per game, but she helps spread the floor for the offense, totaling 17 assists through the first six games, the third most on the team.

The fourth freshman recruit Staley brought in was guard Olivia Thompson from Lexington, South Carolina. Thompson hasn’t seen many minutes due to how stacked the Gamecocks roster is, but whenever she does get in, she makes the most of it. In the first game of the season against Alabama State, for example, she scored 5 points in just under one minute and finished the game with 10 points.

Through the first six games, Harris averaged 11.5 points per game and a team high 4.8 assists per game.

Staley and the Gamecocks started the season at No. 8 in the polls, but after a 6-0 start, including a win against then-No. 4 Maryland, South Carolina is currently sitting at No. 5 in the AP poll.

The Gamecocks were picked by the SEC Media to win the SEC title this season. The coaches of the SEC tapped South Carolina to finish second in the conference, behind Texas A&M.

South Carolina doesn’t start SEC play until a home game against Kentucky Jan. 2, but after SEC play begins, South Carolina will have high levels of out of conference competition against teams such as No. 4 Connecticut.

"With us, it’s about combinations and who plays well together," Staley said at SEC Media Day. "Our bench is going to be incredible, and they may be even more productive than our starters, depending on how we strategize and who starts and who comes off the bench.”

In the exhibition game against the Nighthawks, Staley showed there would be variation in who started during the season. Freshmen Boston and Cooke, sophomore Destanni Henderson and seniors Harris and Herbert Harrigan were in the starting lineup.

Since the North Georgia game, Staley took Henderson out of the starting lineup, opting for Beal instead.

“It’s going to work out better for [Henderson]. I mean, she’ll probably get more minutes in this role for us than she would starting,” Staley said.

Henderson is third on the team in minutes per game, averaging 24.7 minutes and giving the Gamecocks an average 9.7 points per game in her first six games.