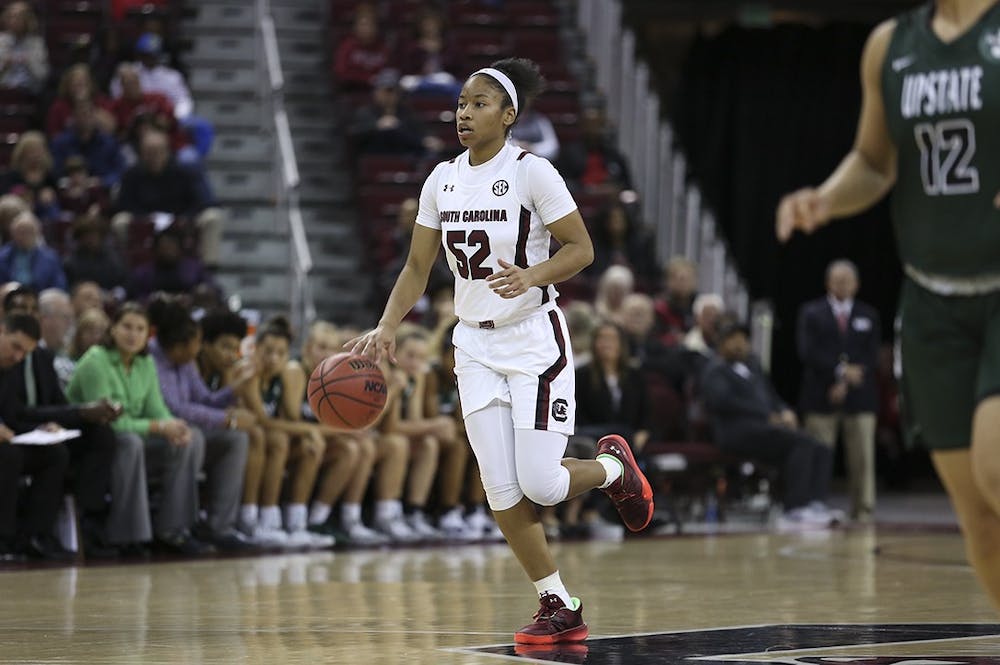 The Gamecock women’s basketball team played in the Paradise Jam, an invitational tournament in the U.S. Virgin Islands, over Thanksgiving break and added two wins and one loss to its record, defeating Washington State and Baylor despite an early loss to Indiana.

The Gamecocks' first game was against the University of Indiana Thanksgiving night. Indiana came into the game ranked No. 17 with a 4-0 record and pulled an upset win, defeating South Carolina 71-57. The Gamecocks were down 38-31 going into halftime after scoring only nine points in the second quarter, a season low.

Overall, South Carolina was called for 23 fouls. Senior Tyasha Harris and freshman Aliyah Boston both fouled out early in the fourth quarter. Harris finished with five points and Boston finished with 10.

"We got ourselves in some foul trouble and were not able to play who we needed to play, who's played for us all season long," head coach Dawn Staley told the Associated Press.

Senior Mikiah Herbert Harrigan led the Gamecocks in scoring throughout the game with 13 points.

The second game, against the Washington State Cougars, provided a bounce back win for the Gamecocks. South Carolina led from the beginning Friday, defeating Washington State 68-53. Herbert Harrigan scored 20 points.

The Gamecocks shot 47.5% against the Washington State Cougars, compared to 36.9% against the Indiana Hoosiers.

South Carolina forced Washington State to turn the ball over 21 times and scored 23 points off those turnovers.

Staley and the Gamecocks finished their time in the Virgin Islands with a 74-59 win over No. 2 Baylor.

South Carolina was led by the offensive power of Boston and Harris, who both scored 20 points. The Gamecocks improved their shooting percentage during the tournament by shooting 52.8% from the field, while the Bears shot 34.8%.

South Carolina's next game is in Philadelphia against Temple on Dec. 7 at 3 p.m. The Gamecocks will be back home Dec. 15 against Purdue at 2 p.m.