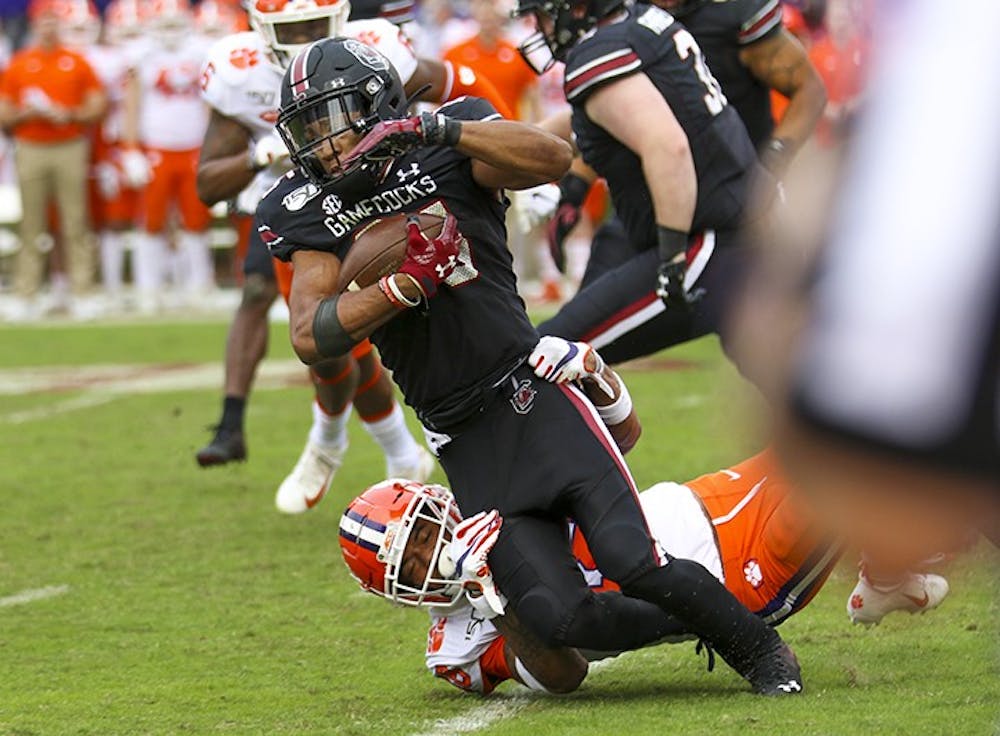 With this win the Tigers extend their winning streak against the Gamecocks to six games, making the overall record for the Palmetto Bowl 71-42-4 in favor of the Tigers.

The Gamecocks defense started out strong, standing up Clemson's junior running back Travis Etienne on a fourth and goal on the opening drive.

The Gamecock offense would take the field with momentum, but it was very short lived. Tigers sophomore cornerback Derion Kendrick picked off freshman quarterback Ryan Hilinski and it was all Clemson after that.

Sophomore quarterback Trevor Lawrence ended the day with 295 passing yards and threw for three touchdowns. He also added 66 rushing yards to his statline during the contest.

Etienne had a solid game on the ground as well, ending the day with 51 rushing yards and two touchdowns.

The defense for South Carolina was unable to contain Clemson's offense, as the Tigers were able to march the ball up and down the field without much resistance.

Wide receivers Justyn Ross and Tee Higgins both torched the Gamecocks' secondary, each coming away with over 100 yards receiving.

The Gamecocks were unable to ever put the ball in the endzone, finishing with a lone field goal.

Hilinski finished the day with 105 passing yards and an interception.

Junior wide receiver Shi Smith said the offense next season can be "as good as we want to be" and senior linebacker T.J. Brunson echoed that by saying the team just has to “go out and execute.”

South Carolina's ground game was unable to get going as well. As a team the Gamecocks rushed for 69 yards, highlighted by Clemson transfer and graduate senior Tavien Feaster's 47-yard effort.

Gamecock redshirt senior punter Joseph Charlton showed off his leg, punting the ball seven times in the game for a total of 314 yards. He averaged 44.9 yards on each punt and showed why he deserves consideration by an NFL team come draft time in April.

Special teams were the highlight of the game for the Gamecocks, as they were outmatched both offensively and defensively.

Feaster said "we needed big plays" which has been a struggle for the Gamecocks throughout the season.

Senior running back Rico Dowdle described this as a "tough season" offensively and the Palmetto Bowl was no different.

The longest offensive play for the Gamecocks was a 30 yard reception by redshirt junior tight end Kyle Markway, which is his career long.

While he did not go into any details or answer any questions regarding what they might be, Muschamp was adamant that they will "make some changes," likely more on the offensive side.

While the offensive struggles are the most alarming, the defense had their fair share of struggles in the contest.

According to Muschamp, the team is "struggling in a lot of areas" and the defense was torched by Clemson's high-powered offense.

Senior Javon Kinlaw is not worried about the Gamecock's defense next season, shouting out sophomore linebacker Ernest Jones, freshman defensive lineman Zacch Pickens and several other players who will be back next season.

Kinlaw said "They’re just young” and that they will be fine if they have "time to develop."

While the secondary did not have a great day overall, freshman cornerback Jammie Robinson had a great day. Horn said Robinson is "always around the football" which was especially true in this contest. He ended with a career-high 11 tackles, 1.5 of which were for a loss.

The Gamecocks season has drawn to a close as the team finds themselves with a 4-8 record, leaving the team ineligible for a bowl game. This includes their 3-5 record in SEC play.

Muschamp summed up the season by simply saying it has been a "frustrating day, frustrating year" and that "the bottom line is overall, we need to improve."

South Carolina football will be back to Williams-Brice stadium Sept. 5 2020, opening up the season at home against the Coastal Carolina Chanticleers.