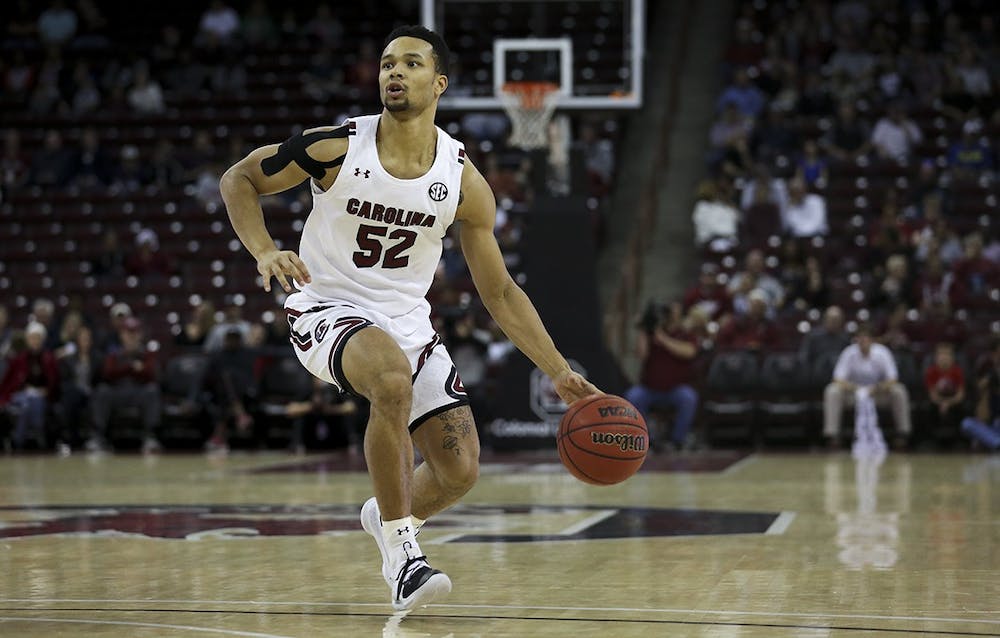 Gamecocks hold on to beat UMass on road

After going on a brief two-game skid in Cancun, the Gamecocks won their second in a row after beating UMass, 84-80 on Wednesday night in Amherst, Massachusetts.

South Carolina got off to a slow start tonight in Amherst, shooting just 33% in the first 10 minutes of the first half. The Minutemen were able to capitalize on this and jumped out to an early 16-8 lead with just over 11 minutes to go in the first half.

The Gamecocks were able to gain some traction with a 6-0 run led by redshirt sophomore Justin Minaya partnered with a scoring drought by UMass that helped South Carolina trim the lead to just three with eight minutes before the half.

Sophomore A.J. Lawson and the Gamecocks continued to go on a run, eventually amounting to a 10-0 run and briefly grabbing the lead. Once the game had almost reached halftime, South Carolina tied the game up at 24.

The end of the first half was highlighted by the return of Gamecock sophomore Keyshawn Bryant. Bryant was an integral part of the team year and had yet to play in a game this season due to injury. He scored six points in the first half.

South Carolina went into halftime with a 39-35 lead, led by Lawson, who ended the half with 13 points.

The Gamecocks went 17-35 from the field shooting 48.6% in the first half compared to the Minutemen who shot 44%. South Carolina struggled from 3-point range in the first half, going 1-6, with the only 3-pointer coming from Lawson who finished with 24 points, giving him the fourth game this season with at least 20 points.

UMass, on the other hand was on fire from the 3-point range in the first half compared to the Gamecocks, shooting 45.5% from three, making 5 out of 11.

After extending its lead, South Carolina went into a scoring drought and UMass found itself on a 7-0 run to start off the second half, cutting the lead to 53-50 at one point early in the second half.

After that though, the game seemed to be all but over for the Minutemen. South Carolina kept a steady lead in the second half, powered by a strong performance from bench players who scored 26 points after scoring 16 in the first.

The Gamecock bench was led by redshirt freshman Jermaine Couisnard who ended the night with 16 points off the bench, as well as Bryant who finished with 13 points in his first game back.

UMass was down 75-66 with just over three minutes left in the game but was able to pull within two points after a 3-pointer from sophomore Carl Pierre cut the South Carolina lead to 82-80 with seconds left. Lawson was able to make two free throws in the final seconds to put the ice on the game, and UMass was unable to grab a bucket in the last couple seconds leading to a 84-80 win for South Carolina.

The Gamecocks' next game is back in Columbia on Sunday against Houston at noon at Colonial Life Arena. The game can be viewed on ESPNU.

This story will be updated as more information becomes available.