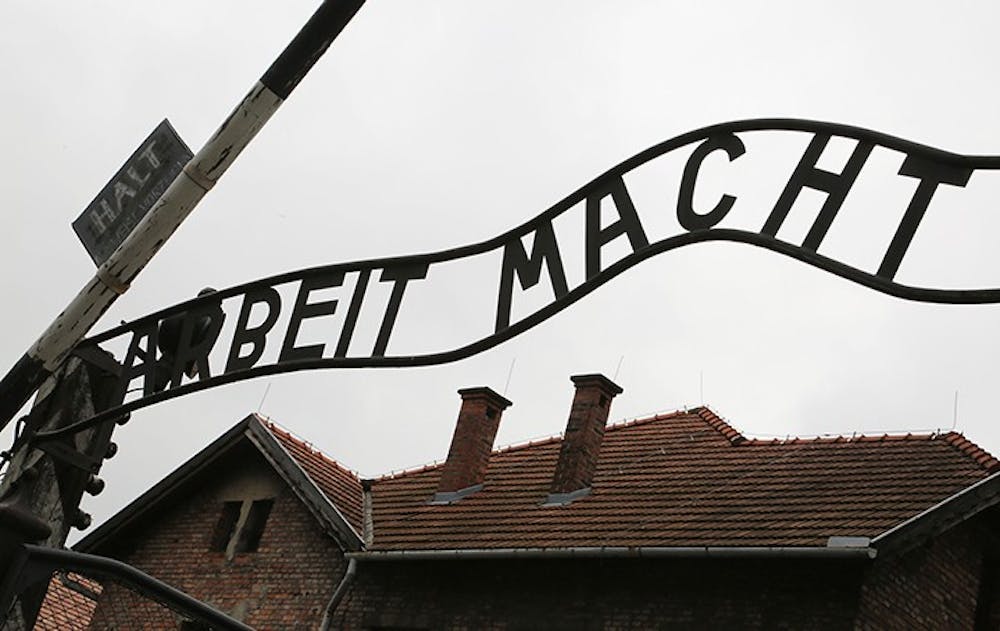 Column: We must combat Holocaust denial

Approaching the 75th anniversary of the liberation of Auschwitz, Holocaust denial must be stopped.

On Jan. 27, 1945, the Soviet Union's Red Army entered Auschwitz, a German death camp located in Poland. There, they found several thousand ill or dying prisoners within the camp — those who had been too weak to go on the death marches of the Nazis who evacuated the camp. The United States Holocaust Memorial Museum estimates "at minimum 1.3 million people were deported to Auschwitz from 1940 to 1945; of these, at least 1.1 million were murdered.

The 75th anniversary of the liberation of Auschwitz is upon us, and the growth of Holocaust denial and reductionism is more prominent than ever against a backdrop of the Holocaust’s atrocities.

Though other groups were targeted in the Nazi genocide, including LGBTQ+ people, Roma people, people with disabilities, Poles and political dissidents, the term "Holocaust" applies more specifically to the Nazi genocide of European Jews.

According to the United States Holocaust Memorial Museum, Holocaust denial is widely defined as "any attempt to negate the established facts of the Nazi genocide of European Jews." Holocaust denial and distortion began immediately following the end of World War II but did not begin growing into a substantial group until the 1970s with the foundation of the Institute for Historical Review — one of the first Holocaust denial organizations.

Holocaust denial and distortion is still alive and well, and it is inherently rooted in anti-Semitism. There should be no room for denial of what has been established, researched and laid out as a fact.

The way to fight against the disinformation and falsification of the Holocaust denial movement is to speak about what happened, educate ourselves and advocate against anti-Semitism in our society.

We shouldn’t vote for politicians such as Arthur Jones of Illinois, who ran for the U.S. House of Representatives and said the Holocaust was “the biggest, blackest lie in history.”

We shouldn’t fall for Mark Zuckerberg saying Holocaust-denying speech should be allowed because the people promoting it aren't “intentionally getting it wrong.”

We shouldn’t be swayed by those who argue the Holocaust was not a genocide, the gas chambers did not exist or the number of people killed is inaccurate.

"Never Again." That’s the message of the aftermath of the Holocaust. That’s the message of survivors, their families and Holocaust educators around the world. In order for Never Again to become a reality, the hard and painful truth of the Holocaust must continue to be taught as it is and not subverted by those people who ignore the facts and the testimony of those who lived it.

On Jan. 27, in honor of all of those who died at the Auschwitz-Birkenau death camp, take a moment to read the testimony of those who survived the Holocaust.

South Carolina has several Auschwitz survivors, who previously or currently live here, including Ben Stern, Jadzia Stern, Felix Goldberg, Pincus Kolender, Rudy Herz and Joe Engel. All of these survivors gave interviews of their experiences to ETV, which can be found online.

Additionally, on Jan. 28, the South Carolina Council on the Holocaust, along with the state of South Carolina and city of Columbia, are hosting a commemoration for the 75th anniversary at USC’s Alumni Center. The keynote speaker of this event is Elisha Wiesel, son of Holocaust survivor and author Elie Wiesel.

Events such as these, the testimony of those who lived through the Holocaust and the documentation of what actually happened are crucial in the fight against the disinformation of the Holocaust denial movement. It's a fight we all have a responsibility for carrying on so we can work towards a world where Never Again is the reality.