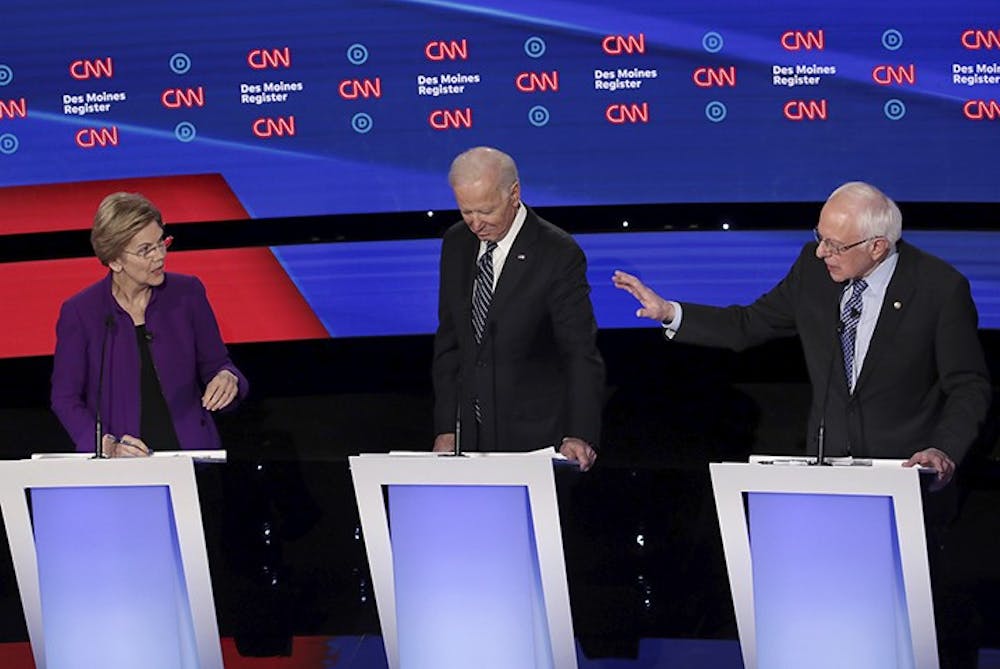 As the 2020 election draws near, voting can get overwhelming, as candidates scramble to win over voters. This election could lead to Trump’s second term or a Democratic candidate's win.

Given that there are many Democratic candidates, I will be focusing on the current top three: Joe Biden, Bernie Sanders and Elizabeth Warren.

Biden, best known as Obama’s vice president, is considered a relatable and well-liked moderate Democrat. His platform centers on the working class, ensuring that they, and specifically those in the fast food and manufacturing industries, get the protection they deserve.

Biden's charming personality and well-known face likely contribute to his standing as the top candidate. His policies are more gradual than those of his rivals, making him more likely to garner Republican support. He wants two years of college to be free while others think college should be completely free, and opposes the Medicare for All plan supported by Sanders and Warren. Biden is the safest choice of the three.

Many current voters who fall under the moderate or independent spectrum do not want Trump to stay in office, but also do not want to have a strongly progressive president. This is where Biden comes in. He can appeal to both moderate voters and liberal voters who are open to moderate policies. He is likely to get these important swing voters, as he has a history working with Republicans, he disagrees with Medicare for All and he is similar to previous moderate presidents who were well-liked and were around during steady eras.

Sanders is a Vermont senator who ran in the 2016 presidential election and was second to Hillary Clinton in the Democratic primary. He is often popular with younger generations, likely due to his strong progressive policies, including Medicare for All and tuition-free public college.

Sanders' progressive policies make him a drastically different choice from Biden. Not only is he more likely to take his policies farther than Biden with Medicare for All and tuition-free college, but he is also a self-described democratic socialist. This identity is a substantial part of his platform — his policies center around creating more equality for citizens so everyone can get what they need and deserve.

While Biden is more worried about the cost of these policies, Sanders believes they are worth working towards. He has mentioned other countries are able to do it successfully, especially Medicare for All and improved education. His trustworthiness and consistent political views could also make him a positive asset to our country. He wants equality among citizens, so everyone has the opportunity to succeed.

Warren, the third most popular candidate, is a Massachusetts senator whose initial popularity in the polls has started to decrease. She has similar policies to that of Sanders, including bringing more power to the working-class while taking some from the rich and eliminating student loan debt.

Warren is a solid candidate and continues to be popular among younger generations, but she has fallen behind Biden and Sanders. While there is still the possibility of regaining traction in the polls, it might be difficult, as she is often a polarizing choice for more moderate voters. Democrats want to vote for someone like her, who has more progressive ideas, but believe voting for Biden will be a safer choice and a stronger candidate to defeat Trump. It seems voters seem to prefer Sanders over her because Warren still considers herself a capitalist and doesn’t want a complete overhaul like Sanders does.

Based on current polls, Biden is most capable of defeating Trump due to his chances of winning over Republicans who don’t like Trump.

But the swing states that can completely shift the election this year, including Florida, Pennsylvania, Wisconsin and Michigan. Democratic candidates are attempting to sway the states that voted majority Trump, including North Carolina and Arizona. In order to maintain his lead, Biden will have to win these states over. Only time will tell whether his current strength in the polls will land him in the Oval Office.

With all these options in mind, remember that your voice matters, and no matter who you prefer, you should go out and vote. Our generation is the future, and it is important for us to be heard.