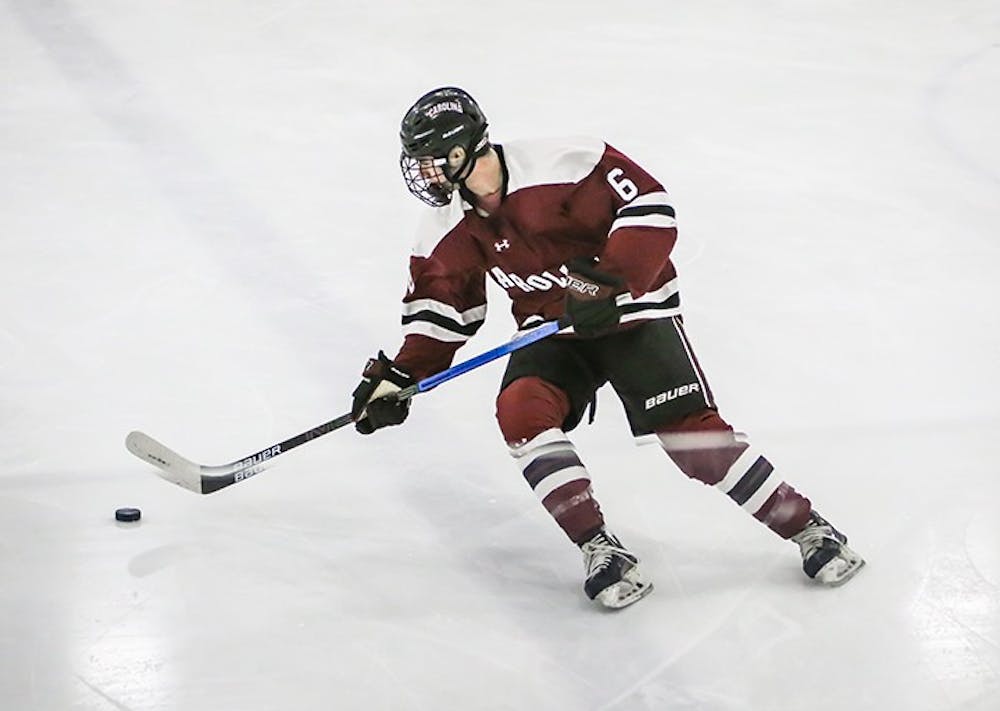 The South Carolina club hockey team (15-1-1, 11-1 SECHC) continued play in the Southeastern Collegiate Hockey Conference (SECHC) with an 8-3 win over the Georgia Ice Dawgs (12-8-2, 11-6 SECHC) Saturday night at the Plex in Irmo.

“This whole opening, and Ryan Hilinski being here, I think pumped up the guys so much,” head coach Allan Sirois said. “They were ready.”

The Gamecocks added to their lead before the break with another goal from Mecca with just over five minutes left in the first period.

After the first intermission, the Ice Dawgs scored two goals in under two minutes from graduate defender Chris Keresztes and junior defender Kyle Harris, putting Georgia on the scoreboard.

The Gamecocks had scoring opportunities with a pair of back-to-back power plays, but failed to make them.

The Ice Dawgs scored no more goals in the second period against the Gamecock defense.

“We went back to what we used to do because we were going all over the map in the beginning of the second, and they took advantage,” Sirois said. “We just went back to basics, and the result speaks for itself."

Five goals were scored in the last period, the first of which came from Gamecock freshman forward Julian Reiss with a little over 12 minutes left.

Late in the third period, Gamecock freshman forward Rob Lawrence and Rudman scored a goal each.

“That’s what we wanted to do, was jump right on them,” Mecca said. “We wanted to really get after them early, and I think we did a very good job doing that.”

The Gamecocks will turn their attention to the Auburn Tigers (14-3-2, 13-2 SECHC) in conference play. The Tigers are coming off back-to-back wins over Florida State.