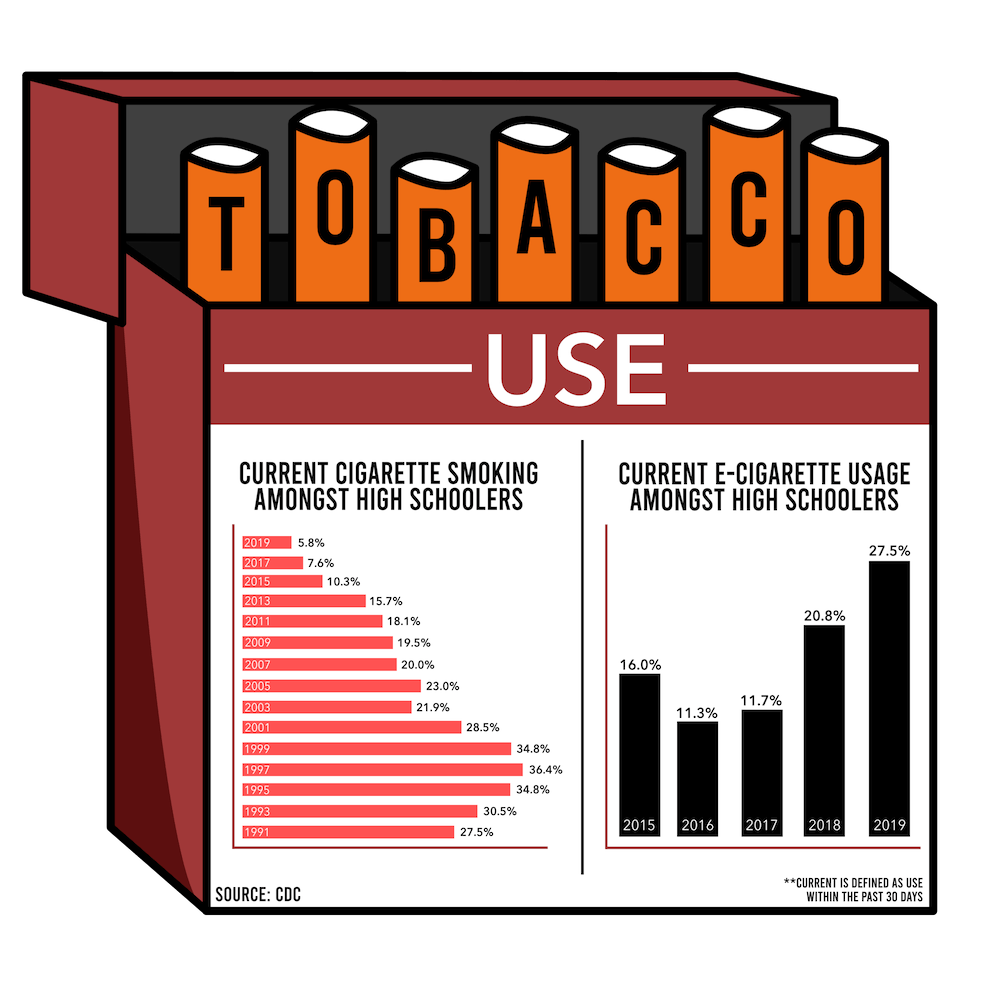 Eighteen-year-olds are legally considered adults, allowed to vote and die for this country, but have to wait to grab a drink and now a cigarette until they are 21. Conversely, science says the brain isn’t fully developed until the age of 25. These varying definitions beg the question: What is adulthood?

The new law changing the legal age of tobacco usage has the potential to slow the surge of underage electronic cigarette usage but further distances 18- to 21-year-olds from their sense of adulthood. It especially affects young adults who are currently this age — who have now had their right to use tobacco products swept out from under them.

Since their introduction in 2015, Juuls have changed the nature of smoking, specifically affecting underage users. High school bathrooms were jokingly referred to as “the Juul room.” With a 75% increase in high school e-cigarette usage from 2017 to 2018, lawmakers decided Juul use was no longer a joking matter.

This past December, the federal minimum age for purchasing tobacco products was changed from 18 to 21. By January, the FDA had banned sales of flavored cartridge-based e-cigarettes in an effort to lower underage usage, citing “epidemic levels of youth use of e-cigarettes.”

College students exist in an odd limbo between adolescence and adulthood. Though they can legally be financially independent, on average, they only cover 27% of the cost of their own education, according to a 2019 study. This is often still a great financial undertaking, but an average 40% of the cost is left to the parents.

This lack of financial autonomy in young adults, combined with mixed signals of their own legality, makes the ages of 18 to 20 an odd experience.

If these young adults are expected to act like adults, they should be treated as such, not post-adolescent “special cases.” Setting different legal ages, even if done with good intentions, strips away the legitimacy of an 18- to 20-year-old’s adulthood.

Because an overwhelming 86% of Americans think the minimum drinking age should be 21 and 73% agree with the Tobacco21 initiative, the indistinct terms of adulthood are not likely to be clarified anytime soon.

Ultimately, this change of law wasn’t to spark a debate over the definition of adulthood. It was meant to distance minors from the chance of having access to potentially damaging substances.

The historic lows of cigarette usage are not the result of age-limiting legislation, but of education, raising cigarette prices and introducing smoke-free workplaces. Similar tactics should be used when tackling issues of e-cigarette usage, rather than complicating the definition of a "legal adult."

Instead of educating youth and young adults on the dangers of tobacco and e-cigarettes, the law leaves 18- to 20-year-olds in a pending state of adulthood.