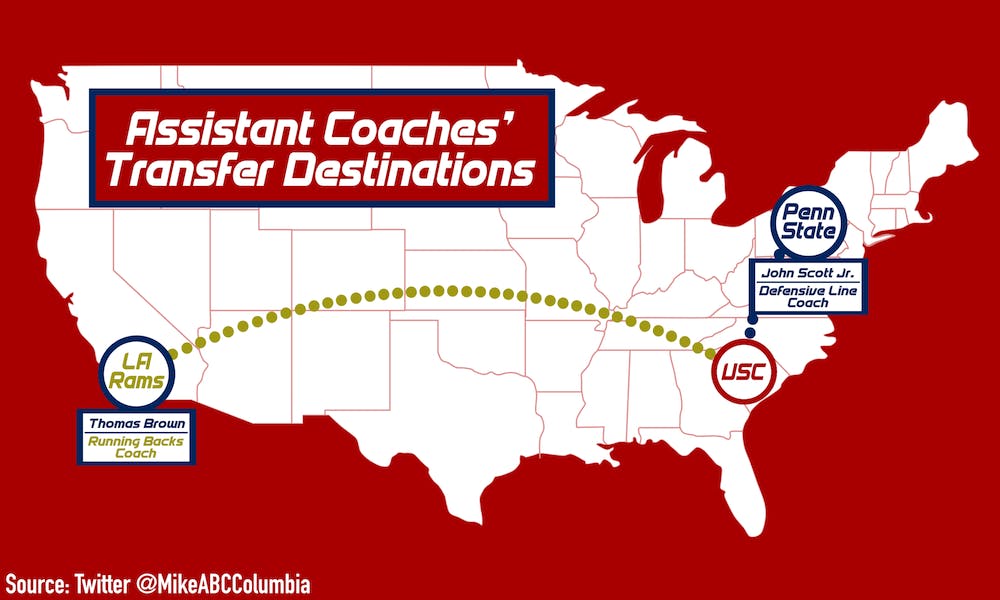 Following a 2019 season that was full of ups and downs for the South Carolina football program, coaches Thomas Brown and John Scott Jr. are leaving Columbia after just one season to continue their careers elsewhere.

Their departures comes at a transitional time for the Gamecocks. In the offseason so far, the program has introduced Mike Bobo, formerly a coach at Colorado State and the new offensive coordinator, and Paul Jackson, the new strength and conditioning coach. Joe Cox, a former Georgia quarterback, left Colorado State with Bobo and was hired to coach South Carolina's tight ends. Former Gamecock quarterback Connor Shaw also joined the staff, taking over for Marcus Lattimore as the director of player development.

Brown will join Todd Gurley, a player he became close with despite Gurley leaving just a year before Brown joined Georgia's staff. During his time at Georgia, Brown coached Sony Michel and Nick Chubb, Division I football running backs.

Scott Jr. will be joining Brent Pry, his defensive coordinator during his playing time at Western Carolina, and will replace Sean Spencer, who took a job with the New York Giants in the NFL.

"I have known Coach Pry for more than 20 years as a player, graduate assistant and position coach, and he has definitely had an impact on my career," Scott Jr. told WLTX19. "I can't wait to get rolling with the defensive line and continue to build on the tradition they have established."

Scott Jr.'s previous position with the Gamecocks has been filled by Tracy Rocker, the former defensive line coach for the Tennessee Volunteers.

"Tracy has great experience playing and coaching in the Southeastern Conference," South Carolina head coach Will Muschamp told Gamecocks Online. "I've tried to hire him before and am glad we were finally able to get him to Columbia and be a Gamecock. He's had great success in this league in developing defensive linemen and has coached a lot of guys who have played in the NFL, which is the goal for many of our players."