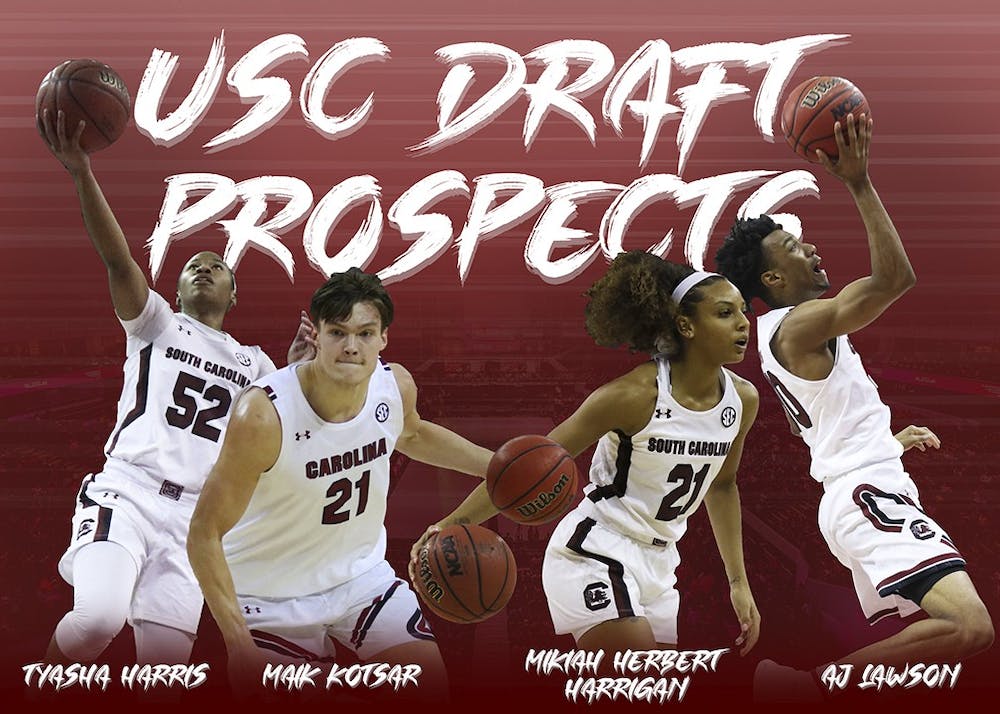 Column: Four Gamecocks could be selected in NBA, WNBA drafts

With a month remaining in South Carolina basketball's regular season, there are four standout athletes who could be selected in the NBA and WNBA drafts.

For some, the most obvious draft prospect on the men’s team is sophomore guard AJ Lawson, who declared for the draft in 2019 but withdrew in order to continue at South Carolina.

Lawson, who has been a big name in his two seasons as a Gamecock, was named to SEC All-Freshman Team in 2019, and in June, three mock drafts listed Lawson as a first-round pick.

This season, Lawson hasn’t consistently looked like a strong first round talent, and updated mock drafts have omitted his name in their projections. However, this doesn’t mean he’s totally out of the running. Lawson recently led the Gamecocks in a close win over Arkansas, scoring 19 points and tying a career-high eight field goals. If he continues to heat up in the remainder of the season, he might still be a late first round pick.

Senior forward Maik Kotsar, who will be automatically eligible for the draft, could also be a worthwhile pick for an NBA team. Kotsar has been impactful for the Gamecocks, recently leading the team to victory over Missouri with a season-high 21 points. Over 23 games, he’s made 52.1% of his field goal attempts and 65% of his free throw attempts, averaging 6.5 rebounds a game. This season has statistically been his best so far. While he’s not necessarily a recognizable name across the country, he could feasibly be a candidate for a second-round selection.

The Gamecock women's basketball team also has some draft prospects. Senior guard Tyasha Harris and senior forward Mikiah Herbert Harrigan, the team’s only seniors, will both be eligible for the WNBA draft after the season, and both have made strong cases for themselves.

Harris currently leads the SEC with an average of 5.2 assists and 12 points per game. In the Gamecocks’ victory over Georgia, Harris notched 13 points and seven assists and claimed the title of South Carolina’s all-time leader in career assists. Earlier this season, she also became the fourth South Carolina women’s basketball player in history with over 1,000 points and 500 assists in her career.

Herbert Harrigan has steadily improved in her four years at South Carolina. This season, she has been shooting for 51.2%, averaging 5.5 rebounds and 12.4 points a game. Herbert Harrigan is also a strong defender, being ranked fifth in program history with 189 career blocked shots.

With 10 points each, Harris and Herbert Harrigan recently led the Gamecocks to their 87-32 victory over Ole Miss. Herbert Harrigan also recorded two blocks and a steal. The two seniors have played consistent roles in the starting lineup and have been instrumental in South Carolina’s success this season, making them strong contenders for draft consideration.

Whether any of these players will declare for the draft remains to be seen, but there are certainly strong players in both the men’s and women’s programs. If selected, these athletes will represent South Carolina in the professional leagues alongside notable former Gamecocks Chris Silva and A’ja Wilson. The 2020 drafts for the NBA and WNBA will take place on June 25 and April 17, respectively.