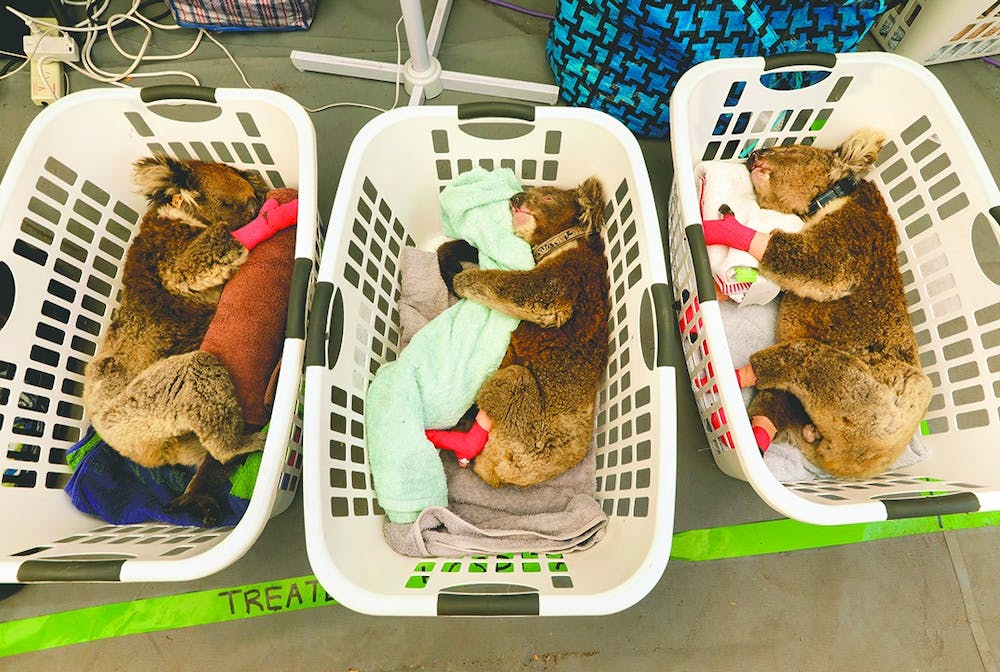 Column: Koalas should be introduced to New Zealand

One of Australia's most iconic mammals, the koala, is particularly at risk of extinction due to wildfire deforestation, but introducing them to New Zealand could save them.

The wildfires that have ravaged Australia’s forests and wildlife caused immense damage to the ecosystem and show no signs of stopping within the next few weeks. Killing over 17 people, according to CBS News, the fires have devastated communities from coast to coast of the country. About 480 million mammals, birds and reptiles have died since the fires started in September 2019.

It has been estimated that up to 30% of koalas’ natural habitat has been incinerated, resulting in the death of 30% of Australia's koala population. While koalas are one of many species to be endangered by the rapid growth of the fires, they have been listed as a “vulnerable” species by the Australian government since 2012.

Due to the concerning decline of the koala population, a petition has gained over four thousand signatures online to introduce koalas into New Zealand’s ecosystem. Koalas are not native to New Zealand, but the central North Island is home to over 28,500 hectares of eucalyptus plants. Koalas, by gaining access to plenty of food, would thrive in this environment, which would slow their decline in population.

Some experts online are showing concern toward the idea because there is danger of koalas becoming invasive in the area. Humans introducing foreign animals into certain ecosystems has been known to cause invasive species, which can harm the balance of the food chain in the area. Possums were introduced to New Zealand in the 1830s, and the outcome was not favorable. The population increased exponentially and possums continue to be a pest in the country today.

As global warming becomes increasingly serious, entire species of animals are dropping off the face of the earth at a rate that has never been recorded. The World Wildlife Fund said between 10,000 and 100,000 species are going extinct each year. Koalas are in danger of becoming one of those lost species. The koala population dropped 42% in Queensland and New South Wales from 1990 to 2010, before the bushfire crisis even began.

Between clearing of forests for agriculture, logging for timber and the wildfire emergency, the koalas’ habitat is disappearing before their eyes. Giving them a safe haven in New Zealand would allow their population to grow enough to take them off the endangered species list.

Ecological consequences of koala extinction aside, koala tourism has brought in $3.2 billion for Australia’s economy. Tourists paying to hold and play with koalas make up the backbone of the tourism industry in Australia, and without the fluffy, huggable creatures, Australia’s economy will see a large deficit.

Australia is not the only country struggling with species endangerment. Though the wildfires have expedited the process for some animals, global warming and habitat destruction continue to cause a major decline in population for animals all over the world.

In South Carolina, according to the South Carolina Department of Natural Resources, at least 13 native species have the federal status of endangered, not to mention the dozens of species listed as “threatened” or “at risk.” Species endangerment is everywhere, and it is rare we get the chance to give the animals the appropriate resources in order for them to repopulate.

The last thing our planet needs is to see another once-prospering species go extinct while humans watch and do nothing. Invasive species have their own risks, but while one is a nuisance, another is a global crisis that will lead to the destruction of biodiversity on Earth.