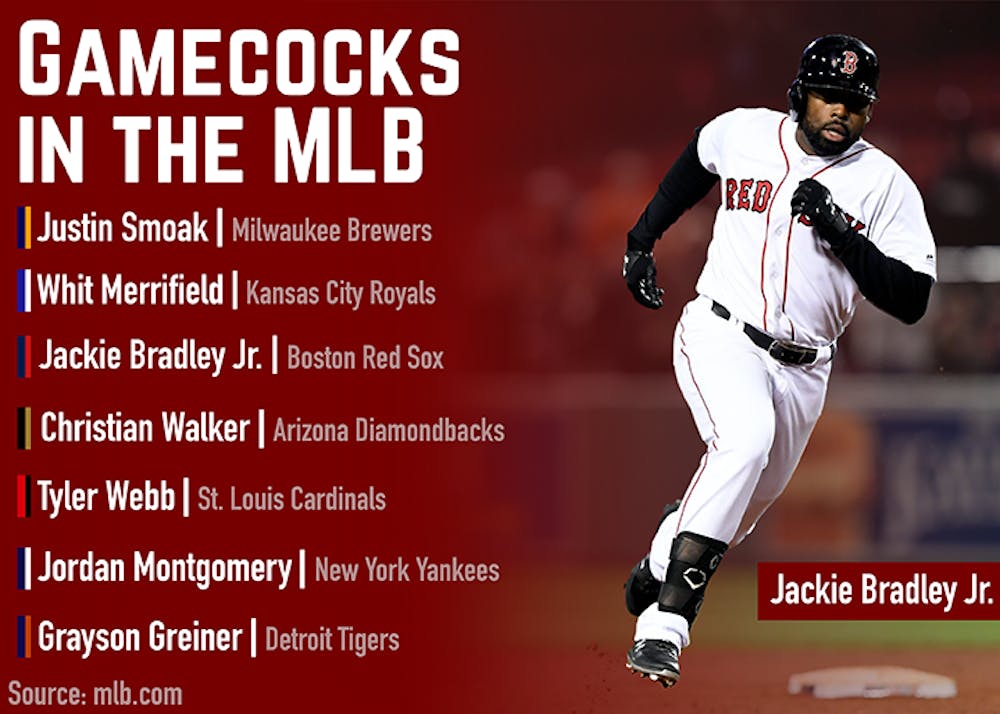 Former Gamecocks suit up to play in MLB

The 2020 Major League Baseball season is now underway after spring training games began on Feb. 21. Heading into the season, there will be seven former South Carolina Gamecocks suiting up for their respective teams.

2020 will be a contract year for “JBJ” as he will become an unrestricted free agent following the conclusion of the season. Last year, Bradley Jr. hit .225 with 21 home runs and 62 runs batted in. In addition, his on-base percentage was .317 along with a slugging percentage of .421 and an on-base plus slugging stood at .738.

In 88 career games, the former third-round pick batted .207 with five home runs and 31 RBIs. Behind the plate, his fielding percentage is .992. In 55 attempts, he threw out 18 runners trying to steal a base. Along with Romine, Greiner will also be competing at catcher with rookie Jake Rogers.

After coming back from Tommy John surgery last year, Montgomery will be competing against J.A. Happ, Jonathan Loaisiga, Michael King and others for the fifth slot in the Yankees 2020 pitching rotation. As a rookie in 2017, the former Gamecock went 9-7 with a 3.88 ERA in 29 starts. He struck out 144 batters and finished with a walk plus hits per inning pitched (WHIP) at 1.23. After not being expected to win a rotation spot during spring training in 2017, “Gumby” should be a heavy favorite to make the team come opening day.

Last season with the Toronto Blue Jays, he hit .208 with 22 home runs and 61 RBIs. During the offseason, the Brewers signed the one-time AL All-Star to a one-year contract worth $5 million with a club option in 2021. While the odds of starting at first base on opening day are likely, Smoak could be fighting for reps throughout the season with Ryan Braun and Ryon Healy.

From 2014-2018, Walker barely received playing time with the Baltimore Orioles and Arizona Diamondbacks. However, in 152 games during 2019, he hit .259 with 29 home runs. This year, Walker is expected to be the starting first baseman for the Diamondbacks team, a that will be in a position a to make noise in the National League West division.

Since being selected off waivers by the Cardinals on June 29, 2018, Webb has been a go-to in relief as he has had a 3.33 ERA in 70.1 innings pitched, striking out 59 batters. In the bullpen, expect to see the southpaw in a middle-relief role in the Cardinals bullpen in 2020.

After battling injuries in 2019, former South Carolina alumni and World Series MVP Steve Pearce “unofficially retired” from baseball according to Rob Bradford of WEEI.com. In 2020, more Gamecocks could be on their way to the show as infielders Peter Mooney (Minnesota Twins) and Max Schrock (St. Louis Cardinals) and pitchers Wil Crowe (Washington Nationals) and Taylor Widener (Arizona Diamondbacks) are all currently in Triple-A.