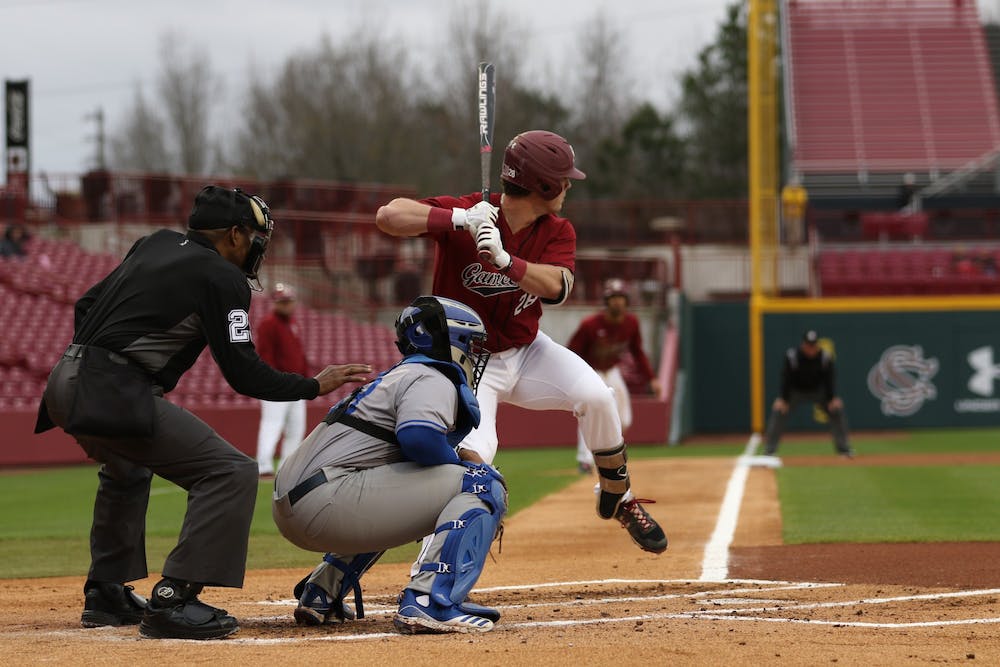 The South Carolina baseball team came away with a 14-3 victory over the Presbyterian Blue Hose during a cold, wet and rainy contest.

Redshirt sophomore right handed pitcher Thomas Farr started for the Gamecocks in what would be his first action of the season.

Head coach Mark Kingston said Farr "set the tone" for the entire game. He pitched a total of 4.2 innings and ended the night with 5 strikeouts while only walking two batters.

Farr hasn't pitched in a formal game in over a year due to injuries, but he was awarded his first win of the season for a 1-0 record on the season. He said he thought his play was a “very good step forward.”

He gave up two runs in the fifth inning, both of which came from a two run homer from Presbyterian's freshman designated hitter Kyle Merkle. The Blue Hose would earn one more point by the end of the game.

Last season, the team sometimes hit the ball over the fence while scoring points. Kingston said he has been pushing the team to have a "good, well-rounded offense" this season.

The Gamecocks put up 14 runs in this game with only two extra base hits.

“Putting the ball in play and getting on base, that’s all that really matters,” junior infielder Noah Campbell said.

Campbell went 2-5 with 4 RBIs, in addition to two stolen bases, for a total of seven through all four games.

“If you have speed, you gotta use it," Campbell said.

Senior shortstop George Callil ended the game batting 3-4 with two singles and a double, and Wimmer went 2-5 and had an RBI.

Kingston said he believes the team has a "strong 1 through 9" that will be vital to its success throughout the season.

Though the season is still young, the Gamecocks picked up their fourth straight win by defeating the Blue Hose.

The team is set to host a three game series against Northwestern this upcoming weekend, beginning with a 4 p.m. game on Friday.