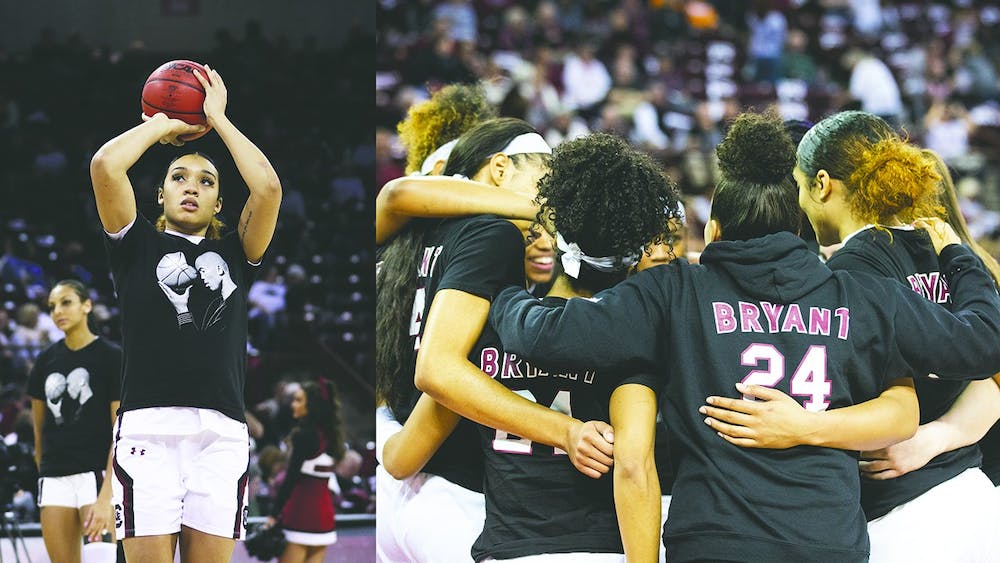 Teams from all over the country have paid tribute to the late basketball legend, Kobe Bryant. At South Carolina, the Gamecocks have remembered Bryant at multiple events in the week following his death.

While all the deaths devastated friends and family, Bryant and his daughter's death hit the sports world particularly hard.

The No. 1-ranked Gamecock women's basketball team honored Bryant by wearing warm-up shirts for their game in Oxford, Mississippi, against Ole Miss on Jan. 30. The shirts had a picture of Bryant on the front, with his name and number, 24, on the back.

The team also held a moment of silence before it hosted its first game in Colonial Life Arena since the accident on Feb. 2.

"It is really hard to swallow, you know, but you relish on the fact that he was a good man. I mean, he was a good man that approached the game like everybody should approach the game," women's head coach Dawn Staley said at a media availability interview. "We're sad because we're gonna miss that and we're gonna miss all the things that he had in store for us to see, but his legacy will definitely live on."

During the team's game against Tennessee, Staley wore Timberlands specially painted for her by "Shoe Chef" Doug Romer from Lexington, South Carolina. The shoes were painted gold and purple, and one had Bryant's face on the side while the other had the number 24 and a picture of Bryant and his daughter.

The South Carolina men's basketball team was also heavily affected by the loss of Bryant.

In a press conference on the day following the accident, Martin said his son, who plays basketball at USC Upstate, struggled with the loss.

"What hurt me the most was [Bryant] was one of the people that I was really, really dying to meet through basketball, or because of basketball," Martin said. "Talk about somebody that was impacting society in an incredible way. What he was doing for homelessness situation in Los Angeles just speaks volumes for who he is and who he was."

Martin remembered Bryant's ability to uplift teammates, challenge others and be a mentor to rising basketball stars.

"I've always been told, what happens in the dark is going to come to light," freshman guard Trae Hannibal said in a press conference. "I've always been playing with that 'Mamba Mentality' type of style and just being aggressive 'cause, you know, that's how he was."

The Gamecock track and field team also remembered Bryant by wearing gold shirts that read "Run 24/8 with Mamba Mentality" at the Carolina Challenge from Jan. 31 to Feb. 1.