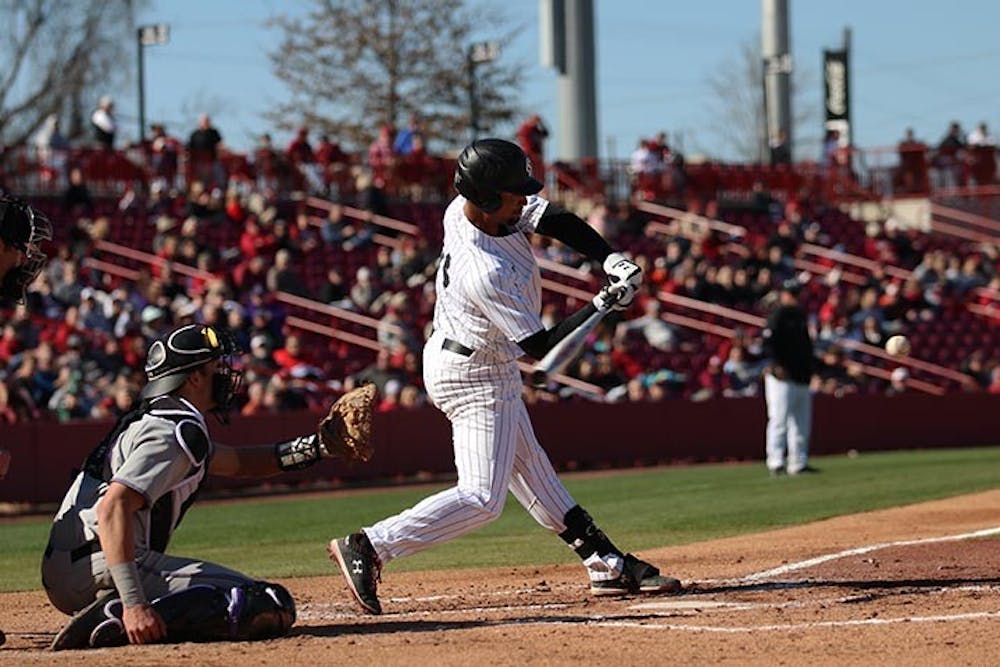 In the final game of a weekend series, the South Carolina baseball team faced off against the Northwestern Wildcats at Founders Park and lost 4-3.

In the third inning, with the runners on the corners and no one out, Gamecock graduate transfer catcher Dallas Beaver was unable to block a pitch that bounced in the dirt, which resulted in Northwestern scoring the first run of the game. Jordan was able to work out of further trouble as he shut down the next three batters.

After being unable to produce against Uberstine through four innings, the Gamecocks found a way to make some noise. Following back-to-back walks to start the home half of the fifth, junior Noah Campbell connected on the first pitch, which resulted in a three-run home run that landed in the home team’s bullpen.

The Wildcats responded during the following inning as freshman Stephen Hrustich hit a high fly ball over the left field fence to cut the opposing lead to one run. This was his first home run of the season.

In the top of the seventh inning, with runners on the corners and one out, Northwestern sophomore Jack Anderson hit a long fly ball to right field. South Carolina’s junior Andrew Eyster jumped and caught the ball to save a potential extra-base hit. While the team was able to turn a double play, the Wildcats were able to score on a sacrifice fly before the third out could be made.

“I just tried to catch the ball and you know, as soon as I caught it, it was kind of like almost a panic. Try to get it back into the field of play. I really wasn’t sure what was going on after that, so just toss it to whoever is closest to me,” Eyster said in a postgame press conference when asked about what was going through his head after making the grab.

Over the course of the following two innings, the score remained tied at three, which meant that the game would be heading into extra innings.

In the top of the 10th inning, South Carolina redshirt senior reliever Graham Lawson was tasked with getting two outs with the bases being loaded. After striking out redshirt sophomore David Dunn, Lawson walked Maxwell, giving Northwestern a 4-3 advantage.

The Gamecocks looked to score at least one run in the bottom of the inning. With a runner on first base and one out, graduate transfer pinch hitter Bryant Bowen ripped a single to the opposite field to put the team in a scoring position. The following batter, junior Jeff Heinrich hit a weak fly ball that was caught in the outfield. Before attempting to tally the final out, the Wildcats turned to junior Jack Pagliarini to seal the deal. With a 3-2 count, he got Beaver to hit a pop fly, which was caught by the shortstop to end the game.

South Carolina lost to Northwestern by a score of 4-3. Freshman Coby Moe collected his first win of the year, Lawson was the losing pitcher and Pagrliarini picked up the save.

The Gamecocks will continue their home stand on Tuesday afternoon as they play host to North Florida. First pitch is set for 4 p.m. and can be streamed on SEC Network+.