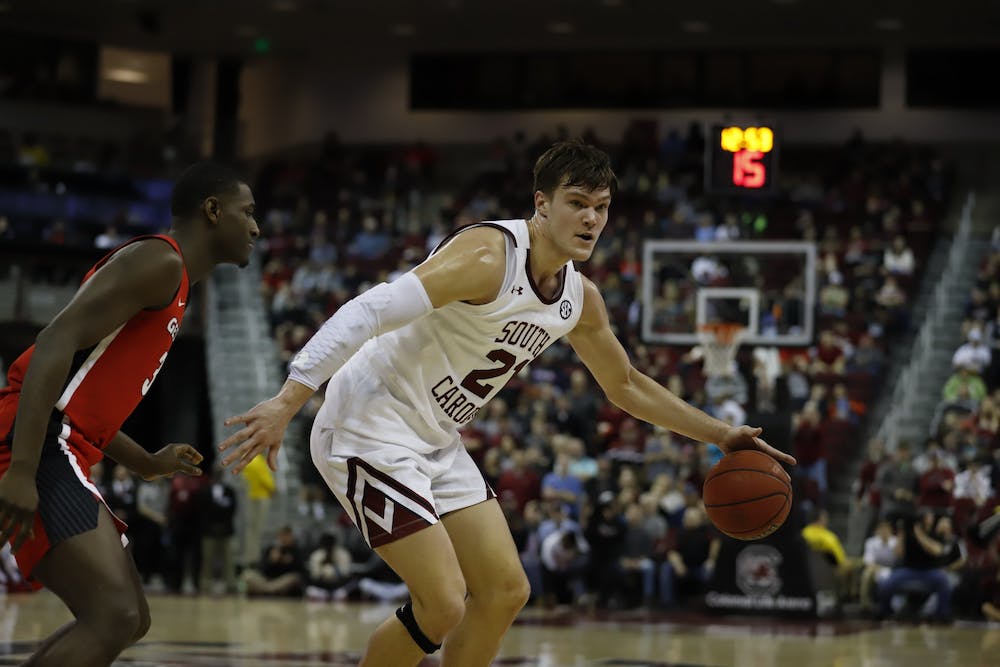 “He might be our most talented inside player, offensively. He’s got really good hands, good footwork, has a feel. When he makes his free throws, he can score points,” Gamecock head coach Frank Martin said.

Frink said preparation and aggressiveness in practice helped him achieve his career night.

When asked if it seemed Frink got more touches early in the game as opposed to others in his career, he said, “Just posting up … trying to post hard and get a basket.”

Though Georgia led through the first period, senior forward Maik Kotsar led a 12-4 run in the second half that put the Gamecocks up 59-52. This 7 point lead was the largest lead of the night for either team.

“When they're playing five guards, and when [Edwards'] playing downhill the way he was playing today, number one, it stresses the guy defending him, because he's alone, and number two, it stresses the help defense,” Martin said.

The Gamecocks shot 62% from the free throw line, but a series of free throws by redshirt freshman Jermaine Couisnard late in overtime gave the team a 5-point lead, after which the Gamecocks walked away with the overtime 94-90 win at Colonial Life Arena.

“We always teach the guards to be aggressive and, you know, try to get downhill,” Gamecock sophomore Keyshawn Bryant said.

The Gamecocks travel to Alabama Saturday. The game can be viewed on SEC Network at 8:30 p.m. South Carolina has an overall record of 17-11 and three games left in the regular season.