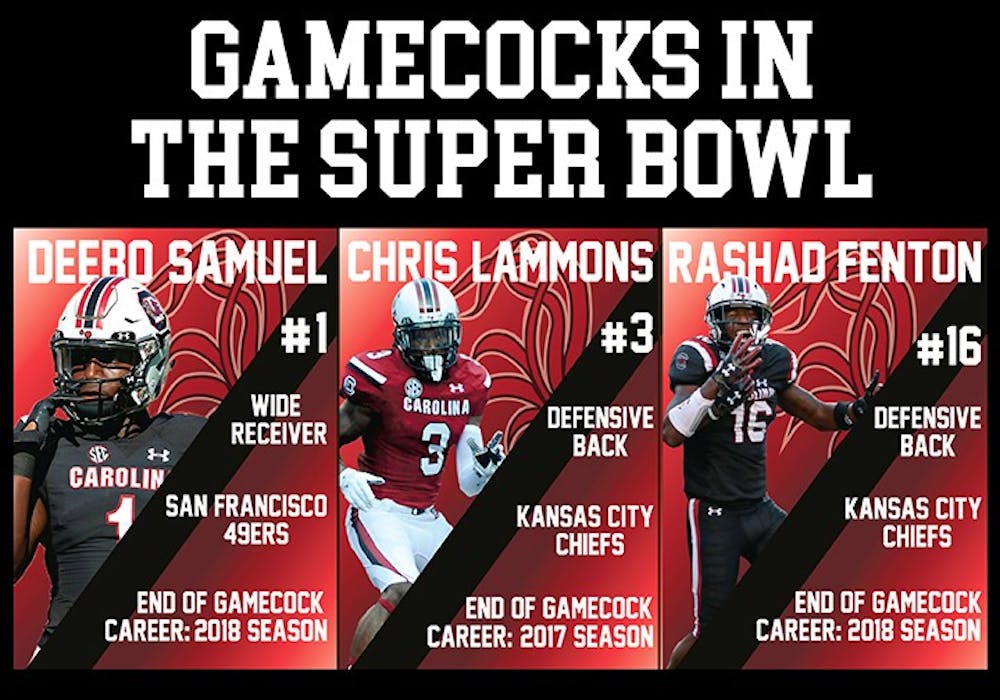 Former Gamecocks take both sides of field in Super Bowl 54

Super Bowl 54 had three former Gamecocks playing in it, marking the eighth consecutive season South Carolina has had alumni playing in the Super Bowl. Two of those three ended the 2019 season as Super Bowl champions.

Rookie Rashad Fenton ended his first season a Super Bowl champion with one tackle in the fourth quarter Sunday night.

The stat sheets won't say much about Fenton's night at the Super Bowl, but his journey in Hard Rock Stadium made Fenton appreciate every moment.

Seven years prior to Super Bowl 54, Fenton was working the concessions in Miami during the Dolphins' regular season. Fenton grew up in Miami, less than 10 minutes from Hard Rock Stadium. He told ESPN this whole weekend feels like a dream.

“I still remember making hot dogs. I did nachos, filled up sodas and passed out peanuts,” Fenton told ESPN. “That was my weekend, week in and week out. I’m here for a different reason right now. Something far greater is destined for me.”

Chris Lammons, defensive back for the Kansas City Chiefs

After starting the 2019 season with the Miami Dolphins, Chris Lammons signed a contract with the Kansas City Chiefs on Dec. 10, 2019.

Lammons had eight tackles in his second year in the NFL, but did not play in Super Bowl 54 for the Chiefs.

Though rookie Deebo Samuel didn't finish the game a Super Bowl champion, he had an impressive game nonetheless.

Samuel kept San Francisco going with five receptions for a total of 39 yards. The 49ers offense utilized Samuel as a wide receiver and a key player in their running game. He rushed for 53 yards and three carries, which set the NFL's Super Bowl record for most rushing yards by a wide receiver.

Samuel became such a targeted receiver for the 49ers that the Chiefs' brought in double coverage to stop him.